14 May 2019 – Explaining, with easy-to-understand charts, why Autism Spectrum Disorders could soon reach an incidence of 50% among fully-vaccinated children in America (and some of the other half of the over-vaccinated children). They are at risk of developing the already escalating vaccine-induced disorders such as Autoimmune Disorders, Asthma, Allergies, the ASIA Syndrome, Macrophagic Myofasciitis and Type I Diabetes Mellitus.

The time-honored (by the vaccine industry, that is) metallic vaccine ingredients, aluminum and mercury (thimerosal), are both recognized as highly toxic substances when they are allowed to come in contact with human tissue. Among other toxicities, they are known to be poisonous to mitochondria and genetic material.

Aluminum is not nearly as toxic to living cells as mercury is, but aluminum has an additional poisonous mechanism of action that I have discussed in past Duty to Warn columns. Mercury, the second most toxic element on earth (just behind plutonium), has actually been eliminated from all but one American vaccine since around 2001. The sole exception is influenza vaccines that come in multiple-dose, rubber-stoppered vials.

Particulate aluminum in vaccines (as opposed to dissolvable or ionized aluminum) is regarded by the vaccine and healthcare industries as an essential ingredient that hyper-stimulates antibody production.

Of course, the downside of that hyper-stimulating trait is that aluminum adjuvants can also easily OVER-stimulate the vaccine victim’s immune system – thus creating the supposedly “perplexing” reality of America’s national epidemic of autoimmune disorders that is occurring now among fully-vaccinated children and young adults. There are over 80 varieties of autoimmune disorders – and counting!

When I was in medical school (1964 – 1968), prior to the explosion of highly-profitable vaccines for children starting in the late-1980s, autoimmune disorders were exceedingly rare. Autoimmune disorders were essentially unknown to occur in children and even rare at my tertiary-care centered University of Minnesota. (See the charts below that show the explosion of childhood vaccines and childhood disorders since the 1960s.) 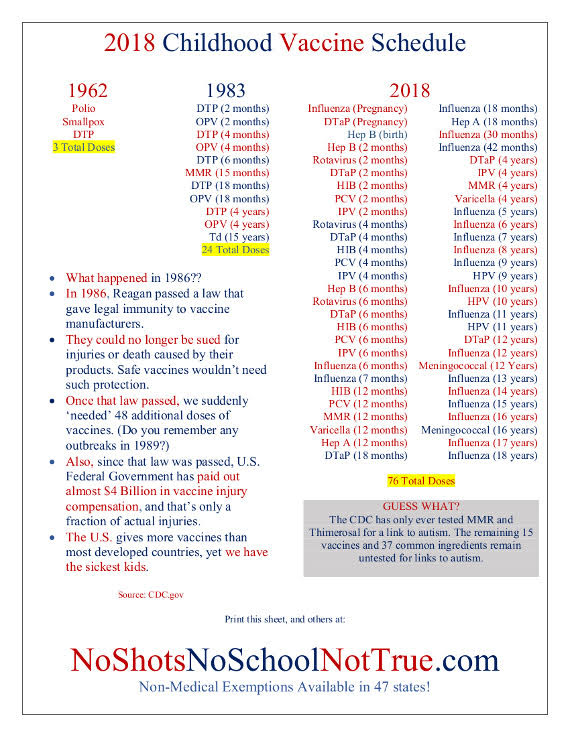 The aluminum adjuvants in many American vaccines are factory-incubated with killed viruses, viral or bacterial particles or synthetic proteinaceous, antibody-inducing material in order to get a child’s immune system to theoretically hyper-stimulate antibodies against whatever is the vaccine ingredient.

What has been intentionally ignored by industry is the fact that all infants in the first year of life are immunologically immature and are naturally incapable of developing fully long-lasting immunity.

Aluminum adjuvants in vaccines were discovered generations ago (but long after Jenner developed his defective cowpox vaccine) to be effective at producing increased “serologic” complexes (antibodies) against whatever infectious agent was incubated with the metal.

Unfortunately, intramuscularly injecting vaccines that are intended to (over-) stimulate immune complexes does nothing to increase the “mucosal immunity”- which may actually be more important in fighting off infectious diseases than serum antibodies.

That widely-ignored reality is probably the major reason why injectable vaccines have never created anything more than temporary, partial and incomplete immunity that therefore perpetually needs intermittent booster doses – which, of course contains more toxic ingredients

What Could Possibly Go Wrong?

The intramuscular injection of a baby or a pet (or an adult) with more than one aluminum-containing vaccine at a time has never been proven-to be safe – or even effective. And knowing that most 2-month-old infants are injected with the same dose of vaccines as that which are injected into the classical “70 kilogram man”.

What could possibly go wrong?

Knowing some of the basic science of aluminum and mercury in vaccines that has been discussed in past Duty to Warn columns should encourage past and potential future victims of vaccine-injuries to question the wisdom of allowing Big Pharma to proceed with their plan to increase vaccination agendas.

Knowing that billions of molecules of aluminum particles have been permanently deposited in the body, brain, kidneys, etc should give pause to any thinking person who is considering increasing the amount of toxins every time the flu season or well-baby check comes around.

I think that I am justified in doubting that today’s medical students and residents are receiving any information that disputes current for-profit vaccine industry policy.

One wonders how many patients that are on kidney dialysis or kidney transplant services have been injected with too many aluminum-containing vaccines. That reality should surely be a consideration, if prevention of another tragic, iatrogenic epidemic is a consideration.

One hopes that medical students, nurses, nurse practitioners, physicians, nephrologists and kidney transplant surgeons are taking important, thorough history about vaccine toxicity from their patients – but somehow, I doubt it.

I have read the published testimony from respected nephrologist and author Suzanne Humphries (who wrote the important book about this serious issue: Dissolving Illusions: Disease, Vaccines, and The Forgotten History.

In that important book (soon to be black-listed?), Dr Humphries told the story about the three adult male patients that she consulted on over just a couple of week’s time. Each of the three men had developed acute renal failure following their routine aluminum-containing flu shots. (All three knew for certain that the flu shots had caused their kidneys to shut down.)

Thimerosal (mercury) was a common vaccine ingredient that was commonly added to multiple dose vaccine vials to prevent bacterial contamination of the rubber-stoppered bottles. There is no known safe amount of mercury, which means even a small amount is toxic. It is far more toxic to living tissue than aluminum. Mercury was commonly used in vaccines during the 1990s when there was a concomitant – and very alarming – increase in vaccine-related autistic spectrum disorders. (Study the graph.) 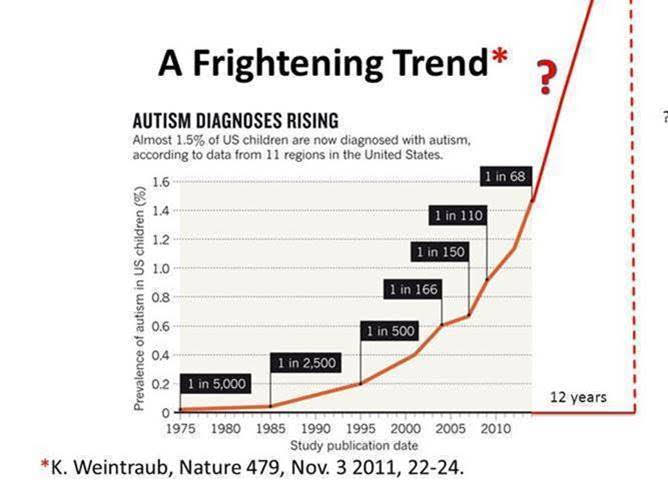 When the American Academy of Pediatrics (AAP) finally acknowledged the connection between their highly-profitable vaccination agendas, the trade association and its naturally-concerned pediatricians appealed to the vaccine makers to eliminate mercury from infant vaccines. The vaccine industry did just that, but only after their mercury-contaminated vaccine supply was depleted and their customers had used up their inventory.

Sadly, it was at that precise time of mercury elimination that Big Pharma was simultaneously increasing the use of neurotoxic aluminum adjuvants in most of their new vaccines. (Consult the above chart again. Most of those new vaccines contained aluminum.)

In this column are a number of essentially “banned” charts that expose what many would justifiably call criminal enterprises. The Hippocratic Oath has had no influence on those enterprises. 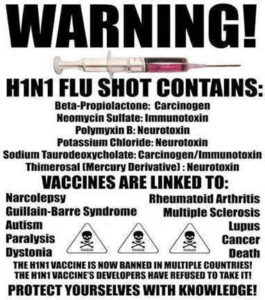 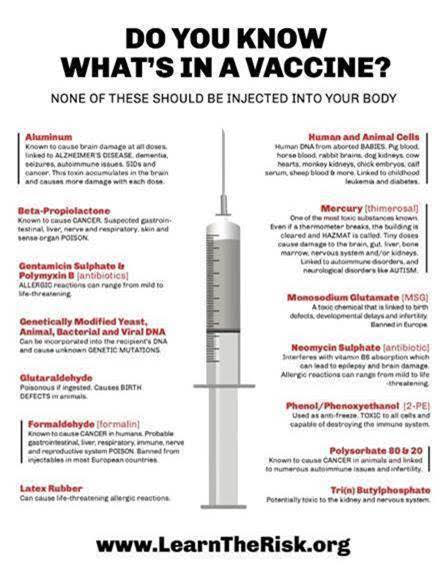 The charts printed in this column should help explain to confused Americans why, prior to the mid-1980s:

Most thinking people who are paying the least bit of attention to America’s many health care crises are probably suspicious of the immense power that Big Pharma-related corporations have over the mainstream media.

Powerful for-profit Big Pharma-related entities essentially determine what is allowed to be reported in their “owned” media enterprises (except for the Duluth Reader, so far). Big Pharma corporations provide 70% of Big Media’s advertising revenues through the massive advertising of their drugs and vaccines (and, thankfully, my Duluth Reader takes no such advertising).

Please study the charts above and below, especially the autism chart. The statistically-accurate curve shown has led many essentially “silenced” and “un-bought-by-industry” healthcare experts to ominously-predict that if current vaccine agendas that are being so heavily-promoted by Big Pharma-captured institutions, the future for America’s over-vaccinated children is not good.

Hopefully the FDA, CDC, AAP, AMA, AAFP, etc. will be able to free themselves from the headlock in which Big Pharma has them and their physician-members will begin again to honor the Hippocratic Oath that they once regarded as sacred.

The already catastrophic incidence of ASD (currently rising to the alarming 2% from 0% when I was in med school) will continue on to an eventual 50% of fully vaccinated children!! Any discerning reader that is unassociated with the medical-vaccine industries will have to agree with the predictions.

Perhaps a common-sense moratorium on any more vaccinations is in order. 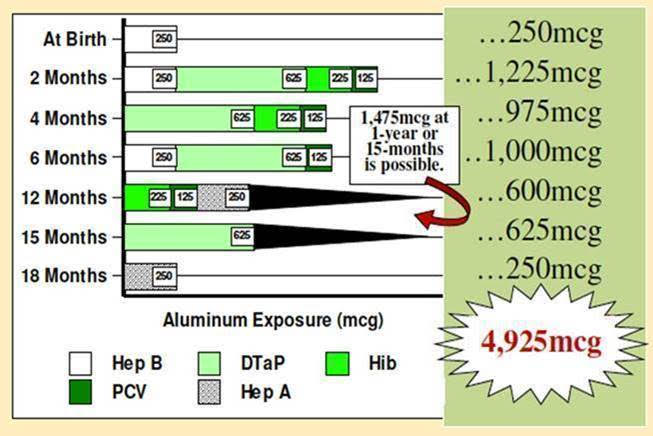 A chart listing the amounts of particulate aluminum that is contained in some infant vaccines. 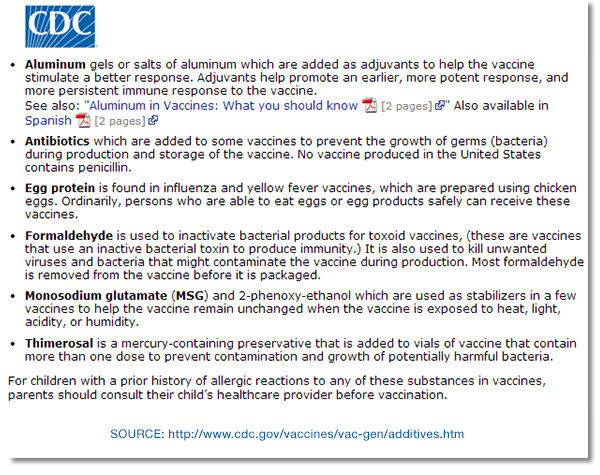 The CDC Sugar-coats the 6 Most Toxic Ingredients that are Commonly Contained in Infant (and Adult) Vaccines.

Dr Gary Kohls is a retired physician from Duluth, MN, USA and a member of the TRANSCEND Network. In the decade prior to his retirement, he practiced what could best be described as “holistic (non-drug) and preventive mental health care”. Since his retirement, he has written a weekly column for the Duluth Reader, an alternative newsweekly magazine. His columns mostly deal with the dangers of American imperialism, friendly fascism, corporatism, militarism, racism, and the dangers of Big Pharma, psychiatric drugging, the over-vaccinating of children and other movements that threaten American democracy, civility, health and longevity and the future of the planet. Many of his columns are archived at http://duluthreader.com/search?search_term=Duty+to+Warn&p=2; http://www.globalresearch.ca/author/gary-g-kohls; or at https://www.transcend.org/tms/search/?q=gary+kohls+articles; ggkohls@gmail.com

Anticopyright: Editorials and articles originated on TMS may be freely reprinted, disseminated, translated and used as background material, provided an acknowledgement and link to the source, TMS: Futilely Trying to Expose Big Pharma’s Vaccine Cartel with Facts, is included. Thank you.