The U.S. Put Nuclear Waste under a Dome on a Pacific Island–Now It’s Cracking Open 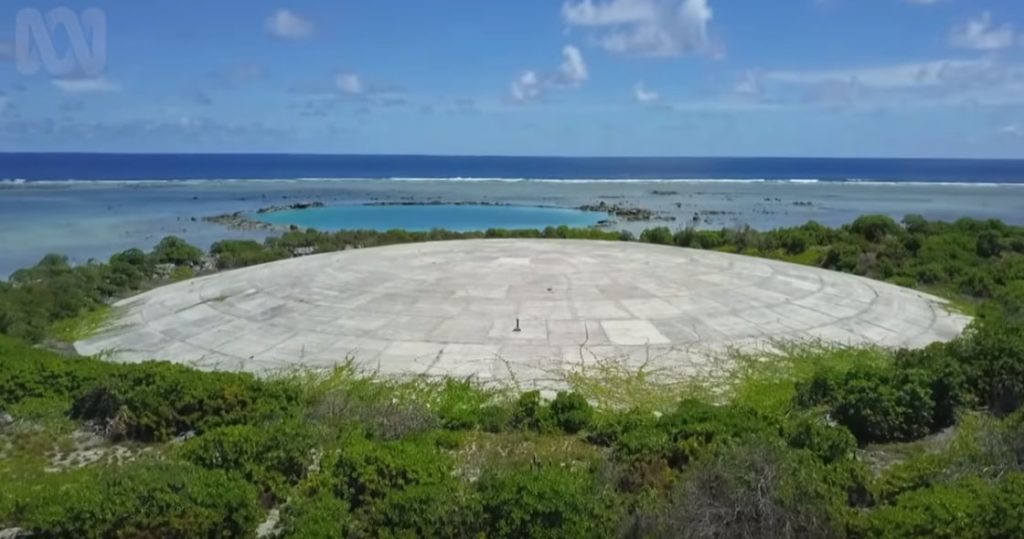 For decades, radioactive debris has sat on an uninhabited island in the Pacific Ocean. /ABC News (Australia)

Within seconds, a mushroom cloud towered 4½ miles high over Bikini Atoll in the Marshall Islands. The explosion, the U.S. government’s first weaponized hydrogen bomb, was 1,000 times as powerful as the “Little Boy” atomic bomb blast that flattened Hiroshima — and a complete miscalculation.

Scientists had underestimated the size of what became known as the “Castle Bravo” test, resulting in an explosion that was 2½ times larger than expected. Radioactive ash dropped more than 7,000 square miles from the bomb site, caking the nearby inhabited islands.

“Within hours, the atoll was covered with a fine, white, powder-like substance,” the Marshall Islands health minister would later testify, according to the Atomic Heritage Foundation. “No one knew it was radioactive fallout. The children played in the ‘snow.’ They ate it.”

The 1954 explosion was part of nuclear tests conducted as the American military lurched into the nuclear age. From 1946 to 1958, 67 U.S. nuclear tests pulverized the tranquil reefs and islands of the central Pacific. International pressure finally halted the tests, but the damage was done — and continues to this day.

That was the message reiterated by U.N. Secretary General António Guterres on a recent tour of Pacific islands to discuss climate change. In Fiji on Thursday, he told a crowd about the huge “kind of coffin” built by the United States in the Marshall Islands to house the deadly radioactive debris from the 1980s. The structure, however, was never meant to last. Today, due to disrepair and rising sea tides, it is dangerously vulnerable. A strong storm could breach the dome, releasing the deadly legacy of America’s nuclear might.

“I’ve just been with the president of the Marshall Islands [Hilda Heine], who is very worried because there is a risk of leaking of radioactive materials that are contained in a kind of coffin in the area,” Guterres said in Fiji, Agence France-Presse reported.

Guterres’s “coffin” was the product of a belated American response to the testing of the 1940s and 1950s. Beginning in 1977, the Defense Nuclear Agency began a sustained cleanup of the nuclear debris left over on Enewetak Atoll, a slender ring of coral islands in the Marshall Islands’ northwestern corner.

Enewetak Atoll was subjected to repeated blasts during the testing, and inhabitants were forced to relocate before the explosions began. Beginning in 1977, 4,000 U.S. service members began collecting an estimated 73,000 cubic meters (2.58 million cubic feet) of tainted surface soil across the islands, according to the Marshall Islands’ government.

The material was then transported to Runit Island, where a 328-foot crater remained from a May 1958 test explosion. For three years, the American military dumped the material into the crater. Six men reportedly died during the work. Locals took to calling it “The Tomb,” the Guardian reported.

In 1980, a massive concrete dome — 18 inches thick and shaped like a flying saucer — was placed over the fallout debris, sealing off the material on Runit. But the $218 million project was only supposed to be temporary until a more permanent site was developed, according to the Guardian. However, no further plans were ever hatched.

In 1983, the Marshall Islands signed a compact of free association with the United States, granting the island nation the right to govern itself. But the deal also settled “all claims, past, present and future” tied to the nuclear testing and left the dome in the care of the island government.

According to a 2017 report by the Australian Broadcasting Corporation, the fallout included plutonium-239, an isotope that is one of the world’s most toxic substances, and one with a radioactive half-life of 24,100 years.

The staying power of that material is the problem. It’s still there, only 18 inches of concrete away from waters that are rising.

Cracks have reportedly started to appear in the dome. Part of the threat is that the crater was never properly lined, meaning that rising seawater could breach the structural integrity.

“The bottom of the dome is just what was left behind by the nuclear weapons explosion,” Michael Gerrard, the chair of Columbia University’s Earth Institute, told the ABC. “It’s permeable soil. There was no effort to line it. And therefore, the seawater is inside the dome.”

According to the Guardian, a 2013 report by the Energy Department admitted that radioactive material may have already begun to leak from the dome, but it said the health risks were probably low.

The Marshallese government, however, does not have the money to shore up the structure, leaving it vulnerable to both rising tides and typhoons.

“It’s clear as day that the local government will neither have the expertise or funds to fix the problem if it needs a particular fix,” a Marshallese official told the Guardian.

Last week, Guterres sounded a similar theme in Fiji about the ongoing effects of the American testing on the small island nation.

“The Pacific was victimized in the past as we all know,” he said Thursday, according to Agence France-Presse. “The consequences of these have been quite dramatic, in relation to health, in relation to the poisoning of waters in some areas.”

Kyle Swenson is a reporter with The Washington Post’s Morning Mix team. He previously worked at the New Times Broward-Palm Beach and Cleveland Scene.