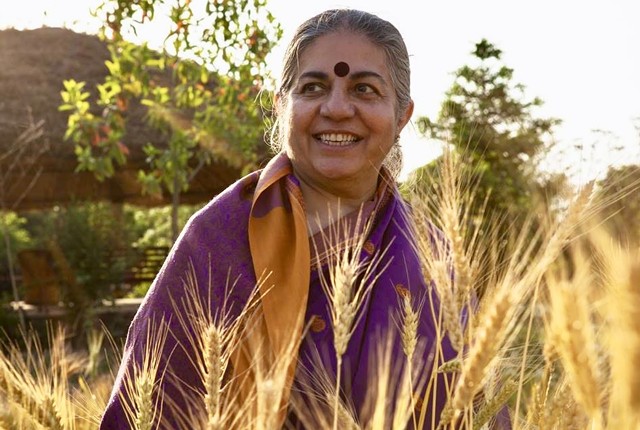 3 May 2019 – Dr. Vandana Shiva, 66, the high-profile organic agriculture and environmental activist and author from Delhi, India, has received many awards and accolades over decades of advocacy work spanning organic agriculture, biodiversity, climate change and social justice. Among other honors, she has earned the Right Livelihood Award, dubbed the “alternative Nobel Prize,” and the Sydney Peace Prize; and has been named an Environmental Hero by Time magazine. Her uncompromising zeal has also prompted criticism, as detailed in a 2014 profile in the New Yorker.

Reached in India before her trip to the U.S., Shiva talked with Seven Days about bio-imperialism, the power of women, and bad curry.

SEVEN DAYS: You will be at the Vermont Statehouse on Monday to promote an international pledge for “Poison-Free Food & Farming by 2030.” Can you explain the pledge and why it is necessary?

VANDANA SHIVA: The pledge has grown organically. I think the first place was the Paris Climate Treaty [in 2015] where everyone was doubtful whether the governments would agree. The gaps are still huge. So we got all the movements together and made a pledge and pact for the Earth that the governments can fail, but that we will not fail the Earth.

We believe every community should exercise its freedoms from poisons, from fossil fuels, because the two are one. All chemicals in farming come from fossil fuels. Climate change, 50 percent comes from industrial agriculture. Each has been a separate fight: GMOs with toxins like the Bt [Bacillus thuringiensis] gene put into the crop, agri-chemicals [like] herbicides, pesticides. We needed an umbrella term to explain this toxic entry into our agriculture.

We are in a very strange situation, not just with respect to food and agriculture but also with respect to democracy, because the two are linked. In the poison cartel, as I call it … Bayer bought Monsanto, Dow and Dupont have merged, and Syngenta and ChemChina have merged. This cartel of three is controlling chemicals and seeds, and trying to control the future of agriculture.

Now people are rising, using their constitutions to pass laws at their level, like Vermont passed the GMO labeling law. Across Italy, movements are [trying] to ban pesticides. So what do they do? In your country they call it preemption, which is Congress [passing legislation and] saying no other lower level [of government] can make a decision on the subject. This is what happened with the [GMO] labeling issue.

The poison-free campaign is both helping people know how pervasive this stuff is and also unifying movements. We have a solution in ecological agriculture. I want the billionaires to escape to Mars and leave the Earth alone for us to take care of. Elon Musk wants to go to Mars. Everyone wants to go to Mars. They’re afraid of working here. They’re afraid of healing the Earth.

Even dear [Stephen] Hawking said there are only two options: extinction or escape. No, there’s a third option: Stay home and take care.

SD: What is one concrete step that average Vermonters can take in their daily lives to support this effort?

VS: Already so many people in Vermont are taking the necessary steps. If you produce food, become organic. If you don’t grow your own food, link to an organic farm. Start eating organic and poison-free food.

If you’re an institution, make your institution, your school, chemical-free and organic. If you’re a church, where [the bread is] supposed to be a sacrament, start making the shift. I’ve always said democracy goes from the base up and every individual is the center of the new change.

SD: You have traveled to Vermont several times. It’s a small state with sometimes large impact. How has Vermont helped advance your cause?

VS: This is a democratic contest, and my trip back to Vermont is a pilgrimage for democracy. I see Vermont as the place where democracy constantly gets revived.

I believe that small is the place where the big change will happen and has always happened. In the time of our freedom movement, it was the small spinning wheel that Gandhi pulled out. Gandhi said we will spin our own cloth because, as long as we buy your cloth, our weavers will die. I took inspiration from the spinning wheel in the period of what I call bio-imperialism.

The British Empire was an empire of cotton; today the poison cartel empire is an empire of life itself. It’s the little seed that can show us the way out of this new colonialism, this new imperialism. Small places, small people, small things adapt. That’s just the advantage Vermont has.

SD: Navdanya is an Indian-based organization you founded to promote seed-saving, biodiversity conservation, organic farming practices and the rights of farmers. Tell us about one specific accomplishment of this nonprofit that you feel has made the most difference to farmers in India.

VS: The first big accomplishment is that we had people wake up to the fact that seed was not Monsanto’s invention. It was not a machine and it was not an invention. Seed is evolutionary potential. Seed is the evolution of millions and billions of years of the past and holding millions of years of evolution in the future. Seeds are received from nature and our ancestors; we will not obey any law that prevents our duty to hand them over to future generations. Because a patent law makes it illegal to save seeds.

The second part is that I worked with our government to help write laws. Our patent law says seeds, plants, animals are not human inventions, and therefore they are not patentable. Another law [establishes that] farmers’ rights have to be respected. Even when companies have intellectual property as breeders’ rights, they cannot prevent farmers from saving the seed and exchanging the seed.

Just this month, Pepsi sued Indian farmers 10 million rupees each for saving potato seeds. This is related to potato chips. They can’t do it; it’s illegal what they’ve done. We will fight it. [PepsiCo has since dropped the case. ]

And we defined the phenomenon of biopiracy: that when these companies take seeds, or genetic material, or take knowledge and claim it to be their invention; that is an act of piracy — and we have fought cases and won cases. There’s a lovely tree called the neem tree that controls pests ecologically. You might remember in 1984 there was a pesticide plant leak that killed thousands of people in the city of Bhopal. I said, ‘No more Bhopal, let’s plant a neem.”

Ten years later, I find out it’s patented. Eleven years, I fought that case in the European patent office. We won, and that patent was struck down.

So, reclaiming seed, putting into law that seed is not an invention, fighting biopiracy — these are our big achievements. And creating 150 community seed banks so farmers have their own seed and become conservers, producers and users of seed and create communities of exchange.

SD: You are an outspoken opponent of GMOs, even in cases such as “golden rice,” which was developed to help reduce childhood malnutrition and the seed’s intellectual property is controlled by a nonprofit. Can you share why you believe that no GMO is a good GMO?

[Today], what do they have as the dominant GMOs? Herbicide-resistant crops where the superweeds have overtaken the crop itself, and now they’re having to spray even more lethal weedicides. So it’s a failed technology. Technology is a tool. When it’s supposed to do something, it should do that thing. So, on that assessment, herbicide-resistance fails.

In the case of India, the Bt toxin was put into cotton. It was supposed to control the bollworm, and Monsanto’s ads used to say you’ll never have to spray again. Two years ago, the bollworm became so resistant and damaged the Bt cotton crop so badly that farmers were spraying pesticides, and 130 of them died in pesticide poisoning. Another failure.

And with golden rice, there are still 80 patents in the hands of companies. Maybe they have done a licensing deal to a nonprofit. But to grow industrial rice with a pathetic amount of lycopene, which is supposed to give you beta-carotene [a precursor to vitamin A], in a trial that has not yet delivered a successful commercial plantation …

There are better ways to get Vitamin A to people through biodiversity. It’s happening in our Gardens of Hope, which women are planting all over the place. Just because they’re not happening in the hands of the Gates Foundation and the corporations does not mean it’s not happening.

SD: Speaking of women, in your co-authored book, Ecofeminism, you lay out global challenges and potential solutions through female leadership. How would things be different if women ruled the world?

VS: Women do rule the world; they don’t rule the world as guys do. They’ve ruled the world by serving the Earth, by protecting their communities. That’s another kind of rule. Because the rule of the patriarch is a rule over; the rule of women is supporting and with. Women are co-creators with nature.

Capitalist patriarchy says nature is dead and women are stupid. Ecofeminism is saying that nature is very much alive and women are super smart. The shift is already taking place. Women’s way of creating, ruling, supporting, sustaining is the only place where we can sow the future, because the capitalist system and the patriarchal system is killing the future.

SD: Now something less serious: What food do you miss most during frequent travels away from your home in India?

VS: The worst thing is when people try to be nice to me and they make a badly cooked Indian curry. Just throwing spices in isn’t good enough. But what I love when I come to places like Vermont is the delicious cheeses and the delicious milk. Industrial food has been mastered in America and is being exported to the world, but Vermont is the leader of creating alternatives, which is why I’m so fond of it.