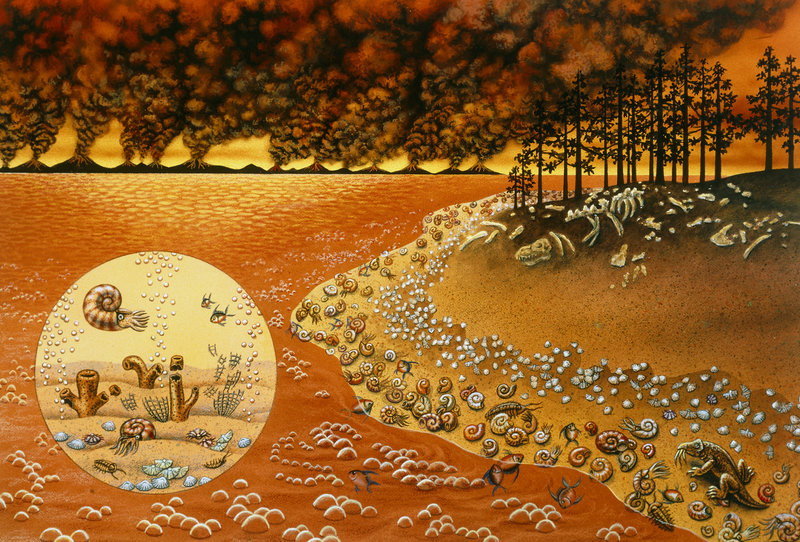 An artist’s rendering of the mass extinction of life that occurred toward the end of the Permian Period, about 250 million years ago.

4 Jun 2019 – There was a time when life on Earth almost blinked out. The “Great Dying,” the biggest extinction the planet has ever seen, happened some 250 million years ago and was largely caused by greenhouse gases in the atmosphere. Now scientists are beginning to see alarming similarities between the Great Dying and what’s currently happening to our atmosphere.

Scientists are highlighting that similarity in a new exhibit at the Smithsonian National Museum of Natural History in Washington, D.C. 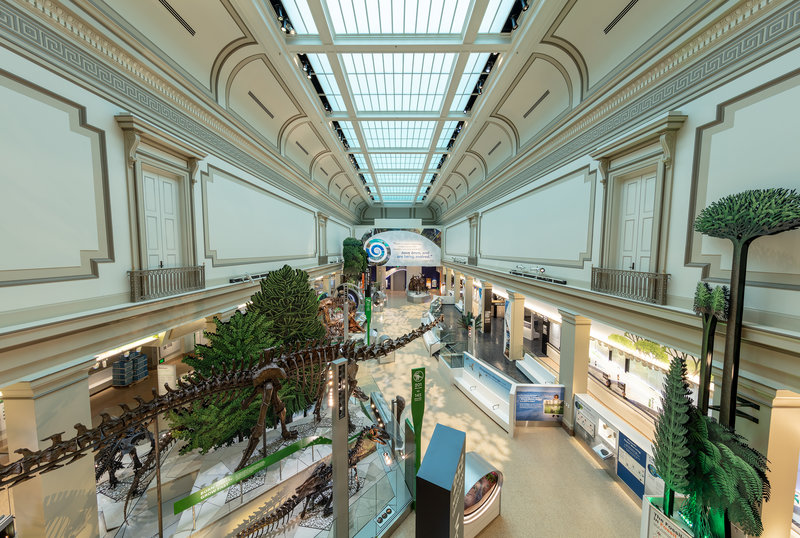 The new Deep Time exhibit in the David H. Koch Hall of Fossils at the Smithsonian National Museum of Natural History in Washington, D.C.
Smithsonian

The crown jewel of the Deep Time exhibit is the museum’s first real Tyrannosaurus rex. Its skeleton stands over the bones of a prone triceratops, with one clawed foot holding down the hapless herbivore and jaws clamped onto its head, ready to take a bite the size of a manhole cover.

“We like to say, ‘Come for the dinosaurs, stay for everything else,’ ” says Scott Wing, one of the curators.

The theme of the exhibit is actually the interconnectedness of life through geologic time. The exhibit shows, for example, how plants at the bottom of the food chain supported everything from insects to 20-ton apatosauruses and how insects helped shape the kind of forests that evolved and changed over millions of years.

Wing likes that — he’s a botanist. “I’m a photosynthesis chauvinist,” he says. “The whole ecosystem is based on photosynthesis.” And because life, from toadstools to tyrannosaurs, is connected from the bottom up, the whole fabric can disintegrate when something big happens to the Earth. And that happened due to global warming. 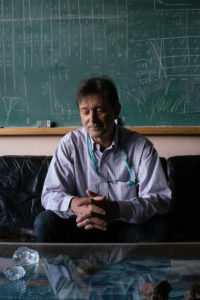 Scott Wing, research geologist and curator of paleobotany, in his office at the Smithsonian National Museum of Natural History.
Ryan Kellman/NPR

It’s explained in the exhibit’s section on the Great Dying. About 250 million years ago or so, an enormous volcanic field erupted in what is now Siberia. It spewed lava that burned though limestone and coal beds and filled the atmosphere with carbon dioxide and pollution, possibly for millions of years. That in turn warmed the planet, made the oceans acidic and robbed them of oxygen. More than 90% of species in the oceans died out as did two-thirds of those on land.

There have been other mass extinctions, like the one that wiped out the dinosaurs about 65 million years ago, but this one, at the end of the Permian Period, was mostly caused by too much carbon dioxide rising into the atmosphere. And the Smithsonian notes often in its exhibit that the current warming of the planet is déjà vu all over again.

“We can learn from studying the past,” Wing says. “They’re also the processes that are being observed by Earth scientists today.” 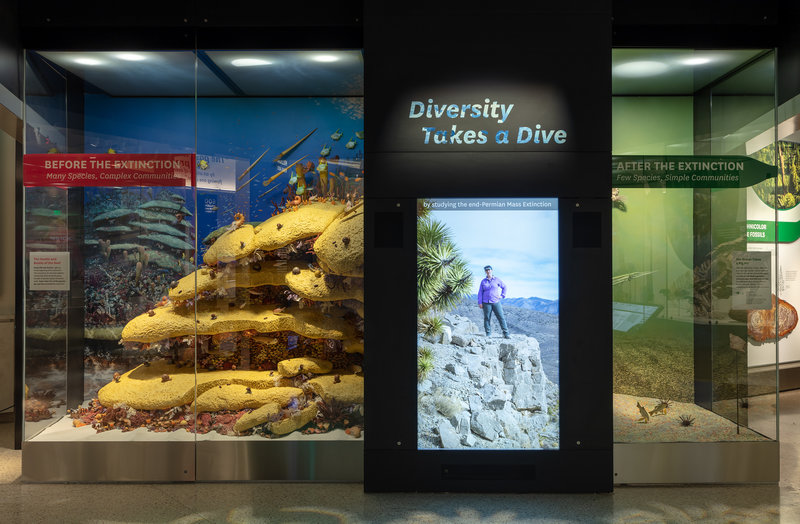 A portion of the Deep Time exhibit is dedicated to the mass extinction called the Great Dying. More than 90% of species in the oceans died out, as did two-thirds of those on land. Smithsonian

One of them is Curtis Deutsch at the University of Washington, whose research helped inform the Smithsonian curators. “The very same things that caused the Great Dying are happening right now in our ocean today as a result of human activities,” he says, “not to the same degree, but in the same direction.”

Currently, the planet has warmed to almost 2 degrees Fahrenheit on average above what it was before the Industrial Revolution, though at the current rate it could warm several degrees more. The Great Dying saw a warming increase of four or five times that.

But it happened gradually. So Deutsch thought, Why not re-create the hothouse of the Great Dying in a computer, a model that simulates the warming, and see how present-day species in the ocean would fare? He could crank up the carbon dioxide — that would in turn raise temperatures and lower oxygen in the oceans. Then he could watch as parts of the ocean started to become deadly.

“The first thing that happens is that you start to see a local loss of species as they begin to move in response to the climate heating up,” he says.

But some parts of the planet were more forgiving. “We discovered something that was kind of surprising and new, I think,” Deutsch explains, “and that is that extinction was very strong everywhere, but it was even stronger near the cold parts of Earth, near the polar oceans, than it was in the warmer tropical oceans.”

It makes sense, he says. Animals that live near the equator can migrate toward the poles to find cooler water, but those that already live in cold, oxygen-rich waters nearer the poles have very little room to run.

Deutsch says the experiment is a window on the future — even the present: Marine species are already migrating. And to Deutsch, that migration looks familiar. “We see responses of marine species to those changes today that look like what we think happened at the end of the Permian,” he says.

The Smithsonian exhibit makes explicit references to the threat from human-caused climate change; it also received funding from industrialist David Koch, who is known for supporting groups that contest the scientific consensus on climate change.

Wing, the curator, says making the connection between the Great Dying and what’s happening now is a message that needs to be heard. “We have exceeded the frame of our own history,” he says of the human race. “Because we are so powerful, we are basically a geologic force now as well as a human force.”

A force that’s changing the conditions for life on the planet.

Christopher Joyce is a correspondent on the science desk at NPR.