After visiting Julian Assange in a London prison, an independent UN human rights expert expressed urgent concern on Friday [31 May], for the WikiLeaks cofounder’s well-being, accusing “a group of democratic States” of “ganging up” on the prisoner to “isolate, demonize and abuse” him and warned against extraditing the controversial publisher to the United States.

31 May 2019 – “My most urgent concern is that, in the United States, Mr. Assange would be exposed to a real risk of serious violations of his human rights, including his freedom of expression, his right to a fair trial and the prohibition of torture and other cruel, inhuman or degrading treatment or punishment,” said Nils Melzer, the UN Special Rapporteur on torture, in a statement.

Mr. Assange’s health has been seriously affected by the extremely hostile and arbitrary environment he has been exposed to for many years – UN expert

He said he was “particularly alarmed” at the recent announcement that the US Department of Justice had lodged 17 new charges against Mr. Assange under the Espionage Act, which could lead to a sentence of 175 years in prison.

“This may well result in a life sentence without parole, or possibly even the death penalty, if further charges were to be added in the future,” said the Special Rapporteur, who was also following up on earlier concerns for Mr. Assange’s health.

On Thursday [30 May], according to reports, he was too ill to appear via video-link from a British prison in a hearing over an extradition request from the US.

Although Mr. Assange is not being held in solitary confinement, Mr. Melzer said he was gravely concerned over the limited frequency and duration of lawyers’ visits and lack of access to case files, which make it impossible to prepare and adequate defense. 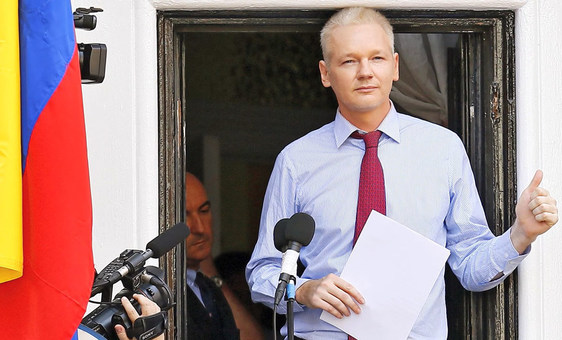 “In 20 years of work with victims of war, violence and political persecution I have never seen a group of democratic States ganging up to deliberately isolate, demonize and abuse a single individual for such a long time and with so little regard for human dignity and the rule of law,” Mr. Melzer asserted.

“Since 2010, when WikiLeaks started publishing evidence of war crimes and torture committed by US forces, we have seen a sustained and concerted effort by several States towards getting Mr. Assange extradited to the United States for prosecution, raising serious concern over the criminalization of investigative journalism in violation of both the US Constitution and international human rights law,” the expert spelled out.

Since then, he said that there has been a “relentless and unrestrained campaign of public mobbing, intimidation and defamation” against the defendant – not only in the US, but also in the UK, Sweden and more recently, Ecuador – that includes humiliating, debasing and threatening statements in the press and online as well as by senior political figures and magistrates involved in proceedings.

“In the course of the past nine years, Mr. Assange has been exposed to persistent, progressively severe abuse ranging from systematic judicial persecution and arbitrary confinement in the Ecuadorian embassy, to his oppressive isolation, harassment and surveillance inside the embassy, and from deliberate collective ridicule, insults and humiliation, to open instigation of violence and even repeated calls for his assassination”, the UN expert asserted.

“Collective persecution of Julian #Assange must end now. My most urgent concern is that, in the United States, Mr. Assange would be exposed to a real risk of serious violations of his human rights,"- Nils Melzer, the UN Special Rapporteur on #Torture

On 9 May, the Special Rapporteur visited Mr. Assange with two medical experts who specialize in examining victims of ill-treatment. The team spoke to the prisoner and conducted a thorough medical assessment.

“It was obvious that Mr. Assange’s health has been seriously affected by the extremely hostile and arbitrary environment he has been exposed to for many years,” the expert said. “Most importantly, in addition to physical ailments, Mr. Assange showed all symptoms typical for prolonged exposure to psychological torture, including extreme stress, chronic anxiety and intense psychological trauma.”

Calling the evidence “overwhelming and clear,” Mr. Melzer said that Mr. Assange “has been deliberately exposed, for a period of several years, to progressively severe forms of cruel, inhuman or degrading treatment or punishment, the cumulative effects of which can only be described as psychological torture”.

The Special Rapporteur condemned “in the strongest terms” the “deliberate, concerted and sustained nature of the abuse inflicted” on the prisoner.

“By displaying an attitude of complacency at best, and of complicity at worst, these governments have created an atmosphere of impunity encouraging Mr. Assange’s uninhibited vilification and abuse”, the expert argued.

In official letters, Mr. Melzer urged the four involved governments to cease all activities prejudicial to Mr. Assange’s human rights and to provide him with redress and rehabilitation for past harm.

He appealed to the UK not to extradite the prisoner to the US or any other State that would not provide guarantees against his onward transfer to the US; and reminded Britain of its obligation to ensure Assange’s unimpeded access to legal counsel and adequate preparation for his proceedings.

“The collective persecution of Julian Assange must end here and now”, concluded the UN expert.

Special Rapporteurs and independent experts are appointed by the Geneva-based UN Human Rights Council to examine and report back on a specific human rights theme or a country situation. The positions are honorary and the experts are not UN staff, nor are they paid for their work.

UN experts warn Assange arrest exposes him to risk of serious human rights violations – 11 April 2019 – Independent UN rights experts today said the arrest of WikiLeaks co-founder Julian Assange by police in the United Kingdom, after the Ecuadorian Government decided to stop granting him asylum in their London embassy, exposed him to “the risk of serious human rights violations”, if extradited to the United States.

UN rights expert urges UK and Sweden to serve ‘good example,’ end arbitrary detention of Assange – 15 February 2016 – A United Nations human rights expert today called on the United Kingdom and Sweden to promptly accept a UN working group’s ruling that Julian Assange, founder of the WikiLeaks website, is being arbitrarily detained and must be allowed freedom of movement.