Why the United States Rejects International Criminal Justice: Looking Back at Nuremberg

And the “happiest” day of his career, according to Bolton? It occurred 15 years earlier, working for then-president George W. Bush, when he persuaded the US government to withdraw its signature from the Treaty of Rome, which established the International Criminal Court.

The ICC judges in charge of the Afghanistan case considered that such an investigation would not be possible without US cooperation, but the prosecutor of the Court, Gambia’s Fatou Bensouda, has stated that she will appeal. Her request includes not only an investigation into Afghanistan but also allegations of torture in the secret prisons of the US Central Intelligence Agency (CIA) in Poland, Romania and Lithuania.

Faced with US neoconservatives’ uncompromising, blanket rejection of international criminal justice, supporters of the ICC usually invoke the precedent of the Nuremberg Trials. They highlight the active role taken by the United States in the creation of the International Military Tribunal (IMT), which tried the 21 most senior leaders of the Nazi regime between November 1945 and October 1946.

However, the call for a return to American leadership of international criminal justice is based on a problematic historical narrative that doesn’t stand up to closer examination.

Invoking the “spirit of Nuremberg”

Two weeks prior to the ICC decision, Chile Eboe-Osuji, the Nigerian judge and president of the ICC, was in Washington, DC, to see one of the last living Nuremberg prosecutors, Benjamin Ferencz (born 1920), receive the Anne Frank Award from the Dutch government.

The speech was given at the annual meeting of the prestigious American Society of International Law (ASIL), on the invitation of its president, Sean D. Murphy. Eboe-Osuji characterized Jackson as a pioneer and a hero of universal justice, and an inspiring figure.

John Bolton and Secretary of State Mike Pompeo are apparently deaf to such historical arguments. On April 5, 2019, they announced that the US entry visa for ICC prosecutor Fatou Bensouda had been revoked. Thus making good on a threat voiced in 2017, when Bensouda’s office announced the opening of a preliminary investigation into war crimes committed in Afghanistan since 2002, by all parties, including the US military.

How can we explain this power struggle?

The ICC judges’ abrupt decision to abandon the Afghanistan inquiry is seen as a forfeiture by those in the field of international criminal justice – a constellation of various organizations and stakeholders at the intersection between law, human rights advocacy and diplomacy – and also in liberal, internationally minded, legal circles. The court is accused of bowing to US pressure, and its credibility appears seriously damaged. 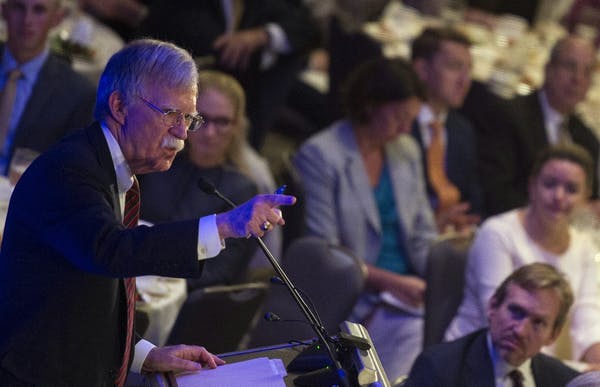 John Bolton during a speech to the Federalist Society, in Washington, DC, on 10 September 2018 – the day the US threatened to sanction judges and officials of the ICC should they continue their investigations into potential war crimes committed in Afghanistan.  Andrew Caballero-Reynolds/AFP

The conflict is essentially between the ASIL, founded by James Brown Scott and Elihu Root in 1906, and members of the US Tea Party; between international legal experts like Murphy (with academic, diplomatic and international resources) and top domestic legal practitioners like Bolton, a Yale graduate and lawyer who opted for a political career in the 1980s. On a symbolic level, the conflict is accentuated by the apparent gulf between internationally minded African legal experts, who – somewhat paradoxically – are well represented on the ICC (accounting for 5 out of the 19 magistrates), and white Anglo-Saxon lawyers and diplomats on the other.

As of now, the neoconservative, unilateralist, government lawyers have come out on top. The voice of liberal, international legal professionals no longer holds sway.

Those on the side of international criminal justice – human rights interventionists or advocates of transitional justice – who hold multiple positions in NGOs, think tanks, foreign office and universities, appear to have been pushed aside.

In the eyes of these liberal legal experts, the “spirit of Nuremberg” (in the words of Benjamin Ferencz) has deserted Washington, DC. “Will we finally apply Nuremberg’s lessons?” Ferencz asked in 2010.

In fact, the US move toward unilateralism and isolationism dates back to the early 1950s. It came after a limited period of innovation, five years at best, whose impact must not be overstated.

From 1944 to 1948, the administrations of Franklin Delano Roosevelt and (first and foremost) Truman actively contributed to the creation of ad hoc international tribunals, in order to try Japanese and Nazi leaders. But the rift that appeared in subsequent years is definitely not as clear-cut as it appears.

As I argue in The Nuremberg Moment, the ex post narrative is deceptive in many ways.

In retrospect, Nuremberg appears to be a short-lived, multilateral chapter in a long history of US rejection of international norms and organizations. Furthermore, it is an ambiguous exception to the rule, since it constitutes a tightly controlled period of innovation.

A narrow definition of racist crimes in international law

In 1944 and 1945, US government lawyers did indeed create the legal framework for the international Nuremberg trials. The charter of the IMT bears the traces of their particular inventiveness, and their capacity to innovate, while neutralizing any element perceived as a threat to US sovereignty.

In this regard, the laws surrounding persecution and crimes committed “on racial grounds” – that is, in the name of a racist ideology (art. 6 (c) of the IMT Charter, Aug. 8, 1945) – are a striking example. 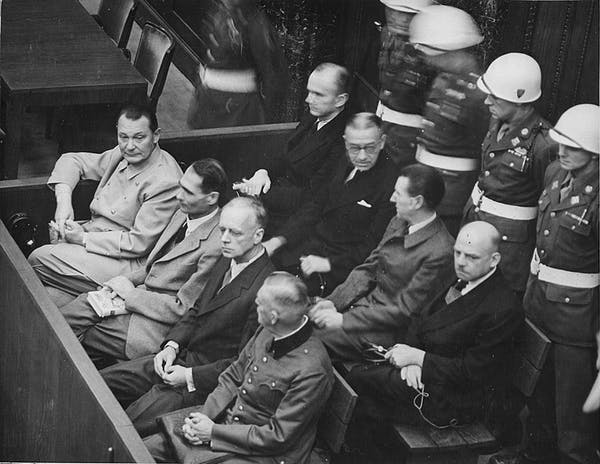 The mass crimes committed by Nazis against European Jews fell largely beyond the remit of the laws of war codified since the end of the 19th century. For this reason, US legal experts developed a new criminal category, the crime against humanity. At the same time, they strictly curtailed its reach, subordinating the category to higher level crimes, such as waging wars of aggression, namely “crimes against peace”.

The internal discussions during the long drafting of the IMT statutes provide proof that these experts desperately wanted to avoid creating a universal legal instrument that would grant courts the right to scrutinize the internal affairs of nation states.

The Jim Crow laws that formed the basis for racial segregation in the US and the endemic violence against African-Americans were high on their minds. This concern was almost an obsession. In July 1945, during the four-power London Conference, Robert Jackson himself flatly declared to his allied colleagues:

To make sure he was understood, he made veiled reference to racial discrimination and lynching on home soil: 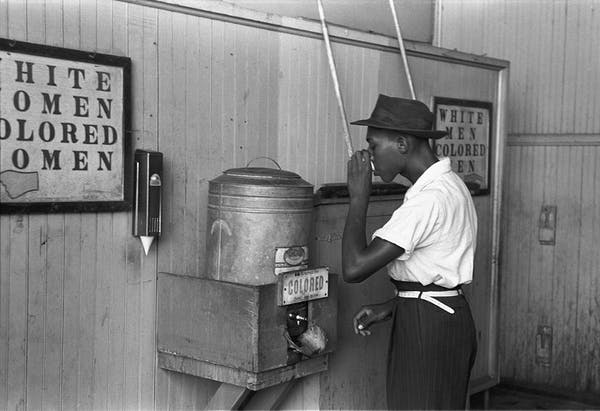 A man drinks at a ‘colored’ drinking fountain at a streetcar terminal in Oklahoma City, 1939. Russell Lee/Wikimedia

This controlled development of international (criminal) law, combining innovation and neutralization of it, was in fact a manifestation of three sets of dispositions (or inclinations) common to US legal experts: the internalization of the strict “color line”, the professional habitus of elite lawyers and the “state thinking” derived from their close ties with government.

This short period of innovation, driven by a limited circle of elite lawyers, rapidly gave way to pure and simple rejection.

A line can therefore be traced between Manley Hudson, who, as early as 1950, opposed the codification of the “Nuremberg principles” within the UN International Law Commission, as well as the creation of a permanent court, and John Bolton, who has been leading a relentless crusade against the ICC since 2002. 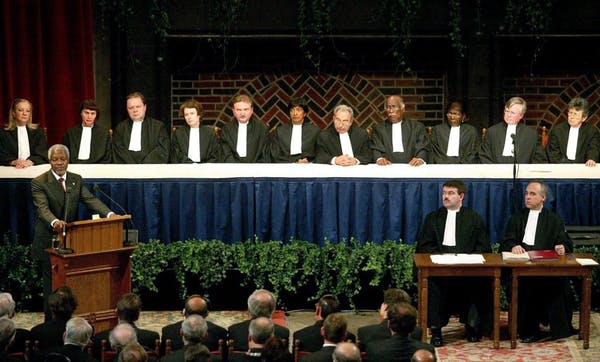 UN Secretary-General Kofi Annan gives the inaugural speech for the International Criminal Court, the very first permanent court with the power to try war crimes and crimes against humanity, at the Hague, on March 11, 2003.
Robert Vos/AFP

The fear of US citizens being prosecuted – for racist crimes in the ‘40s and ’50s , and for war crimes since the ’60s – has become an obsession. It reveals a deep belief in the notion that international law represents a threat to the interests and image of the United States. This is reminiscent of the ideology of “legalism”, analyzed in the 1960s by philosopher Judith Shklar.

In truth, the “spirit of Nuremberg” invoked by progressive lawyers and international criminal justice activists like Ferencz is based on a distorted and somewhat romanticized image of the international trials of 1945-46. The expression itself helped to build a linear, heroic narrative, continuing from Nuremberg to the Hague.

Translated from the French by Alice Heathwood for Fast ForWord.

One Response to “Why the United States Rejects International Criminal Justice: Looking Back at Nuremberg”