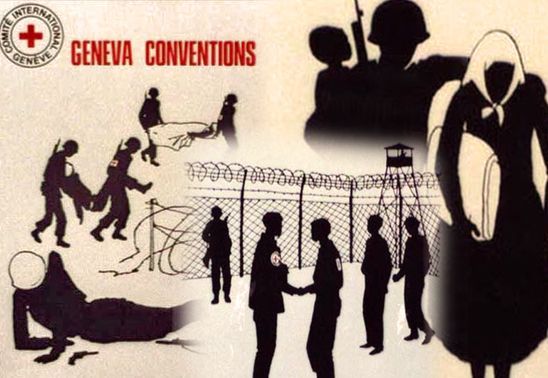 The 1949 Geneva Conventions were drawn up in light of the violations of earlier international humanitarian law during the Second World War.  The first Geneva Convention was drawn up in 1864, the time of the birth of the International Committee of the Red Cross (ICRC). The aims of the ICRC were set out at the time: the development and universalization of humanitarian law and as a neutral go-between in armed conflicts, enabling contact to be maintained between combatants.  There could also be a role to serve as an intermediary between victims and States, reminding States of their obligations towards those victims.

The Geneva Conventions have evolved as the nature of armed conflicts has evolved.  The 1977 Protocols Additional were drawn up by a diplomatic conference held in Geneva in light of the experiences of the war in Vietnam, the greater number of conflicts that could be called “civil wars” and the greater use of armed militias which were not regular military forces. In the 1977 discussions, there was greater awareness of the conditions of refugees, already protected by the international refugee agreements but also a growing awareness of persons displaced within the country, a pattern which has grown.

Closely related to the Geneva Conventions is a second tradition of international humanitarian law, what may be called “The Hague Tradition” growing out of The Hague Peace Conferences of 1899 and 1907.  This tradition places its emphasis on banning the use of certain types of weapons.  The 1925 Geneva Convention prohibiting the use of poison gas was a direct result of poison gas use in World War I.  Since then, there has been a treaty banning the use of land mines, of cluster munitions, and a wider ban on chemical weapons.

The fourth tradition is the development of the 1936 Roerich Peace Pact to protect cultural heritage during armed conflicts.  The 1936 Pact, signed at the White House in Washington, D.C. was a Pan-American Union Treaty.  Its provisions served as the basis of the 1954 Hague Convention on the Protection of Cultural Goods with UNESCO as the official body for its safeguard.  The 1954 Treaty has been progressively enriched by the development of UNESCO’s Cultural Heritage sites.  The International Criminal Court has recently condemned a person for his role in the destruction of UNESCO Cultural Heritage sites in northern Mali, West Africa.

These traditions of international humanitarian law have been highlighted in a number of U.N. General Assembly resolutions such as that on “Basic Principles of Protection for Civilian Populations in Time of Armed Conflict, Resolution 2625 (1971).

Thus, the provisions of international humanitarian law are well developed and cover many issues that are likely to arise in armed conflicts. There are two major challenges for their respect:

The second and more important challenge is that international humanitarian law is not respected even when its provisions are known. The current conscious violation of international humanitarian law including some of the oldest provisions – not attacking medical facilities or not shooting prisoners – has been wide spread in armed conflicts in the Middle East, Africa, Asia and elsewhere.  More than preparing hand books for the military and the militias is needed.

The Association of World Citizens has been stressing the need for a U.N.-led world conference on the reaffirmation of international humanitarian law in which governments, NGOs and armed factions could participate. The degree of respect for humanitarian standards is far from satisfactory, as has been repeatedly pointed out.  However, for the moment, there has not been the needed momentum. Such a momentum is likely to arise only from NGOs. The 12 August anniversary is a reminder that we need to work creatively before major wars not afterwards.

Anticopyright: Editorials and articles originated on TMS may be freely reprinted, disseminated, translated and used as background material, provided an acknowledgement and link to the source, TMS: International Humanitarian Law, Constant Challenges, NGO Responses, is included. Thank you.