Peace Journalism for the Koreas Negotiations 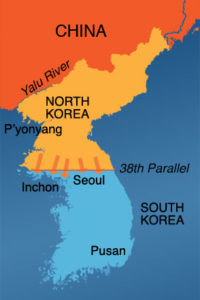 A map of the Korean Peninsula showing the 38th Parallel where the DMZ was established in 1953. (Wikipedia)

“Do not demonise North Korea. Demons do not negotiate. If there are no negotiations, there will be war.” The words of Chung-in Moon to journalists who gathered for the Korea Press Foundation journalism conference in Seoul, last October, as diplomatic efforts were being stepped up for a second summit meeting between Kim Jong Un and President Donald Trump.

Moon is a sage old hand of arms control talks. A current member of the South Korean government’s advisory committee on diplomatic strategy, he previously served as Ambassador for International Security, combining these posts with his career in universities. His advice was timely, given the findings of new research on Australian media and how they refer to the Democratic People’s Republic[i]. In coverage from two major newspapers and the public broadcaster, the ABC, North Korea was usually described as rogue, secretive, totalitarian or evil, with its leader “often referred to as a ruthless psychopath.” Dominant metaphors tended to be conflictual, framing the country as “a military threat [and] unpredictable, irrational and ruthless.” As the researchers comment, the pattern is typical, and not just in Australia.

What would it take, to change the tenor of international coverage? Restraint, for one: CNN’s Seoul correspondent Paula Hancocks, who also spoke at the conference, recalled how she successfully argued against the network running a story on claims that Kim had removed one of his relatives, fallen from government favour, by feeding him to a pack of dogs. Editors in Atlanta had been keen on the story, which was being widely aired elsewhere, but Hancocks advised caution, given that no firm evidence was available to support it.

What can the Peace Journalism playbook contribute? How can readers and audiences be prompted and equipped to consider and value nonviolent responses to the still-unresolved conflict on the Korean peninsula, with all its potential dangers? Look past slogans from both ‘sides’ to focus on the goals of the conflict parties, for one. The Korean war of 1950-53 has never been declared officially over. The Koreas are separated by a so-called Demilitarised Zone (DMZ) which marks the ceasefire line. Given this, Moon said, it was vital to realise that the North saw no reason to consider itself “a defeated nation. [So, they would think] don’t treat us as if we have to surrender to the United States.” Reporters should therefore regard with scepticism calls by hawkish voices on the American side for “complete and verifiable disarmament” before concessions such as the lifting of sanctions (which, indeed, collapsed the second Trump summit, when made under the apparent influence of National Security Adviser John Bolton). Approaches that provide for such steps to proceed in parallel should be seen as more realistic.

Another distinction in the Peace Journalism model originally proposed by Johan Galtung is to focus on “people as peacemakers”, not just leaders. A couple of months before leaving for Seoul, I listened to a talk, at Sydney’s Exodus Foundation, by the veteran nuclear disarmament campaigner, Joseph Gerson, who was visiting Australia from the US. Because the North Korea talks were an initiative of the Trump White House, he explained, Democrats were instinctively sceptical, if not downright hostile. A typical line was: “this is all a sham, Trump gave up too much, we should still be exerting maximum pressure.” Instead, he called on the official agenda for the process to be “attacked from the Left: demand the formation of negotiating teams” to hammer out a sequence of real progress towards denuclearisation, and the “easing of the trade and medicine embargo.” This would also meet one of Galtung’s key recommendations for reporting peace plans, which I presented at the Seoul conference: ask “is the peace plan a process, or only an outcome?” Beyond the day’s headline, what happens next?

If non-elite voices deserve greater prominence on the American side, the same is true on the Korean peninsula. Korea Peace Now: Women Mobilizing to End War, was an intervention by the Nobel Women’s Initiative and Women Cross the DMZ. Taking the form of a letter to Presidents Trump and Kim, they called for normalization of relations by “establishing reciprocal liaison offices, lifting sanctions that harm vulnerable individuals, and facilitating people-to-people engagement.”

One of the chief gains from the first Trump-Kim summit in 2018 was a “freeze for a freeze”: no further nuclear weapons testing by Pyongyang, in exchange for a halt to joint military exercises between the US and South Korea. Peace campaigners are calling for the latter to be made permanent. Over recent years, the pristine environment of Jeju Island has been violated by the establishment of a new naval base, which hosted an “international fleet review” last October. The local Association of Gangjeong villagers, who opposed the development, called on third countries not to send warships to take part. If more media were prepared to listen seriously to such voices, then a more nuanced picture, exposing more of the realistic prospects for peacemaking, could emerge.

As Annabel McGoldrick and I argue in Peace Journalism, our book[ii] distilling many of the discussions we conducted with editors and reporters around the world, presenting inputs to news from unconventional sources requires journalism to construct a “framework of understanding” to establish their relevance to the story. Today’s journalists must do this anyway, it could be argued, to justify their existence as professional communicators. Another contributor to the Seoul conference was Thomas Rosenstiel, Executive Director of the American Press Institute. Publics now require “news fluency”, he said, to enable them to differentiate journalism they can rely on. Editors and reporters can help by explaining “how and why this was a story.” If the message from journalism to readers and audiences in the 20th Century was “trust me”, its equivalent for the 21st, in a world of unprecedented media plenitude, was inverted. Now, the message was coming from readers and audiences, demanding greater transparency as a corollary of that trust: “show me.”

Part of the remedy, for the demonising coverage exposed by the findings on Australian media, would, the researchers say, be to feature “more stories illustrating individual and community life. This would give North Koreans a human face.” Getting the requisite access for such stories is difficult, they concede. However, a notable example screened this year on Australian television, which points the way. The Foreign Correspondent strand on ABC Television took us into the heart of a unique US-North Korean cooperative venture, between clinics in the country for patients with multidrug-resistant tuberculosis – a deadly disease that strikes half a million people a year worldwide – and volunteers from the Eugene Bell Foundation, who work with them.

Titled ‘Out of Breath’, it’s a moving and memorable film, deserving to be more widely viewed – which it can be, on the program’s website[iii]. “I will never forget the first tuberculosis centre I visited,” the film-maker, Hein S Seok, has written[iv]. “As soon as we stopped, the North Korean medical team rushed over with huge smiles. I realised I was witnessing a reunion of old friends who had been working towards the same goal for decades… I discarded any assumptions I might have had about the North Korean people.”

As long-form journalism (the film runs at 28 minutes) it’s in a genre that lends itself most readily to the PJ approach. But there are clear opportunities now for editors and reporters engaged in all forms of journalism to peer beyond the clichés, engage with the goals and agendas of the parties to an unresolved and potentially dangerous conflict, and make room for peace to enter the debate. [v]

Associate Professor Jake Lynch chairs the Department of Peace and Conflict Studies at the University of Sydney. His debut novel, Blood on the Stone: An Oxford Detective Story of the 17th Century, is published by Unbound Books. Jake has spent 20 years developing and researching Peace Journalism, in theory and practice. He is the author of seven books and over 50 refereed articles and book chapters. His work in this field was recognised with the award of the 2017 Luxembourg Peace Prize, by the Schengen Peace Foundation. He served for two years as Secretary General of the International Peace Research Association, having organised its biennial global conference in Sydney, in 2010. Before taking up an academic post, Jake enjoyed a 17-year career in journalism, with spells as a Political Correspondent in Westminster, for Sky News, and the Sydney Correspondent for the Independent newspaper, culminating in a role as an on-screen presenter for BBC World Television News. Lynch is a member of the TRANSCEND Network for Peace Development Environment and advisor for TRANSCEND Media Service. He is the co-author, with Annabel McGoldrick, of Peace Journalism (Hawthorn Press, 2005), and Debates in Peace Journalism, Sydney University Press and TRANSCEND University Press. He also co-authored with Johan Galtung and Annabel McGoldrick ‘Reporting Conflict: An Introduction to Peace Journalism,’ which TMS editor Antonio C. S. Rosa translated to Portuguese. His most recent book of scholarly research is, A Global Standard for Reporting Conflict (Taylor & Francis, 2014).

Anticopyright: Editorials and articles originated on TMS may be freely reprinted, disseminated, translated and used as background material, provided an acknowledgement and link to the source, TMS: Peace Journalism for the Koreas Negotiations, is included. Thank you.

2 Responses to “Peace Journalism for the Koreas Negotiations”