A Morning in Afghanistan

11 Sep 2019 – On a very warm September morning in Kabul, several dozen men, women, and children sit on the carpeted floor of a room at the Afghan Peace Volunteers’ Borderfree Center. The women cluster together. All wear burqas, but because of the heat they push the steel blue veils back, revealing their faces. Most of the men wear traditional tunics and pakol hats.

Parents and children alike listen intently to Masoma, a young Afghan woman who coordinates the Center’s “Street Kids School.” She explains the importance of steady attendance, and parents nod in agreement. Most of the 100 students come on time for their Friday classes, but a handful had recently skipped, showing up only on the day when the center distributes monthly food rations for the Street Kids families.

The previous Friday, those who had missed more than two classes prior to the food distribution day walked away empty-handed—a hard lesson, but the volunteer teachers felt they must abide by the short list of rules governing the center. Anyone who misses classes two or more times in a month won’t receive the ration. 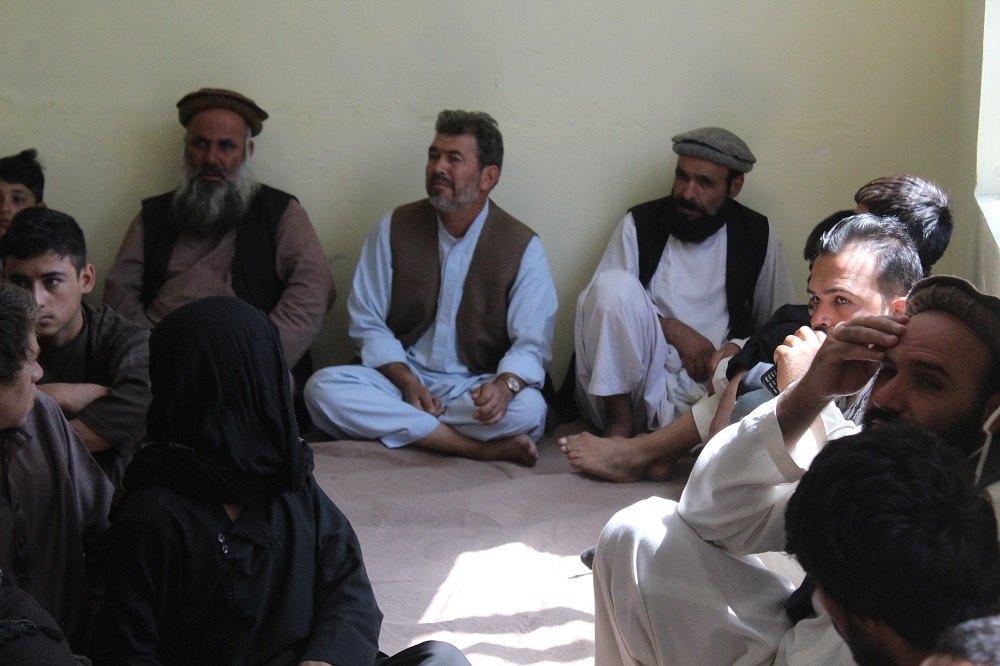 Then Masoma’s colleague, Dr. Hakim, stands and poses two blunt requests. “Please raise your hand,” he says, “if you and your family have at least enough resources to meet your basic needs.”

About six hands are raised. Next he asks people to raise a hand if they couldn’t make ends meet. Seven hands go up. Hakim says his organization wants to help families become self-reliant so that after their children leave the Street Kids School, they will have another way to acquire essentials like beans, rice, and cooking oil.

Hakim now asks people to raise their hands if they could send one family member, like an older brother, to a three-month course on how to repair mobile phones. The idea is well-received. Notebook papers are circulated to gather parents’ names, and, if possible, mobile phone numbers. Several women seek Masoma’s help to write their names. She assures them she will stay in touch.

A tall young man, Habib, carrying a large tray of bananas and apples, politely offers fruit to each guest. Six years ago, Afghan Peace Volunteers members had befriended Habib when they met him in a busy market-place. His father had been killed when a bomb exploded in Kabul. I remember watching him work on a dusty, crowded street during a chilly afternoon shortly after he and his family had taken up residence in a miserable shack in Kabul. His little brother walked alongside him, holding his hand, while Habib carried a scale and asked people to weigh themselves on it. Habib looked forlorn and worried. The shy, anxious youngster had been regularly beaten by an uncle who tried to force him to join a militia; he now recognizes that Habib was wise to run away from the militia. 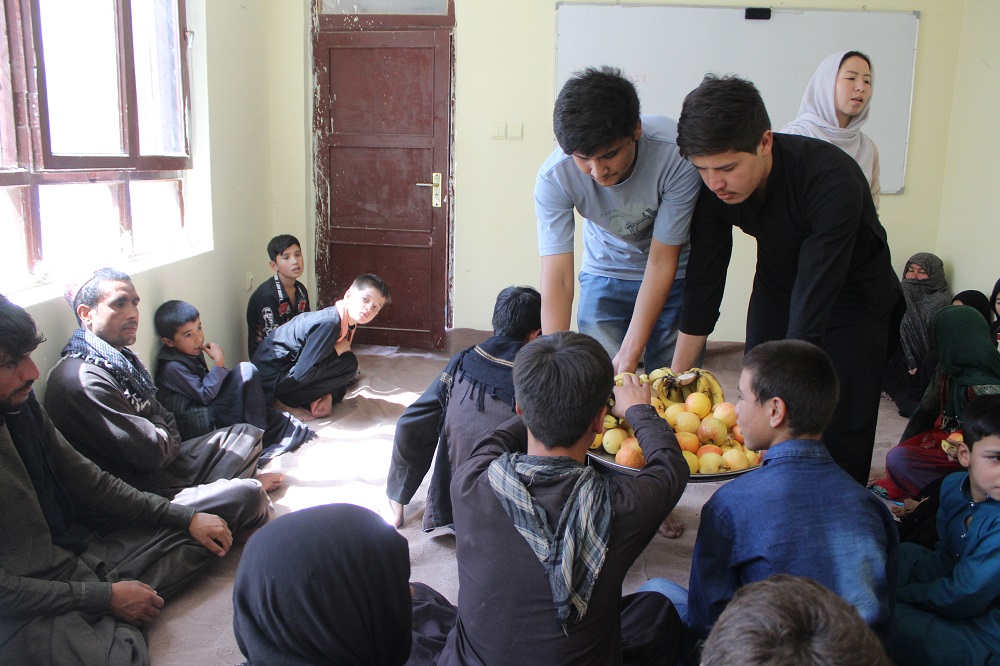 Today, Habib towers over me. Yesterday, he spoke eagerly at a small group meeting he had helped plan about ways to build caring relationships. Over the past three years, he has learned to read and write and has been at the top of his classes at a government school. He has also developed some construction skills. When I remark that several walls at the center were repaired and newly painted, Masoma smiled happily. “Habib!” she says. “He was a big help.”

A few adults linger alongside the center’s shady garden, filled with fruit trees, grapevines, herbs, and flowers. Some of the Afghan Peace Volunteers used permaculture methods to design and cultivate the space. Others recently dedicated themselves to a “renewable energy team.” Last year, the team helped forty-four families acquire solar energy. This year they hope to expand the effort.

Over the past week, young volunteers have gathered to plan for an upcoming “On the Road to Peace” conference. This will be the Afghan Peace Volunteers’ third annual gathering of participants from each of Afghanistan’s thirty-four provinces. The conference offers four days of intensive learning and discovery about cross-cultural understanding, nonviolence, and ways to abolish war.

Yesterday, Dr. Hakim and I asked for complete quiet inside the center’s “office”—a large room lined with bookcases, file cabinets, mats, and sturdy pillows. In the center of the room, a jumble of cords and power strips are connected to a solar power battery, a fan, a router, and a collection of  cell phones and laptops.

Earlier, Amy Goodman of Democracy Now! had invited Dr. Hakim and me to participate in interviews regarding President Trump’s sudden decision to call off a secret meeting he claimed to have arranged between himself, Afghanistan’s President Ashraf Ghani, and representatives of the Taliban who have been meeting with United States envoy Zalmay Khalilzad. Sitting on the floor, we huddled over Dr. Hakim’s well-worn laptop waiting for Democracy Now! engineers to contact us by Skype.

Hakim and I suggested that neither Trump nor any of the negotiators in Doha were participating in a genuine peace process. Rather, it was a cruel charade, with each side seeking greater leverage by demonstrating their willingness to kill innocent people.

Many people living in Afghanistan greatly fear increased Taliban power over their cities, villages, roadways, and crumbling infrastructure. Taliban war crimes are frequently covered in global media. Less obvious to people in the U.S., but horribly real for people in Afghanistan, are acts of aerial terrorism regularly waged by the United States military.

Writing for The Daily Beast earlier this year, Andrew Quilty described how one Afghan family in the Helmand province suffered a vicious attack on their home last November. Two Taliban fighters had come to their home, insisting that Obaidullah, the householder, let them in. He pleaded with them to leave, but instead the Taliban fighters fired on a joint United States and Afghan military convoy. Shortly thereafter, a United States A-10 Warthog plane strafed Obaidullah’s home.

“Hundreds of rounds of ammunition—bullets the size of large carrots—fired by a weapon designed to disable armoured tanks, poured out of the plane’s Gatling gun,” Quilty wrote. “The two Taliban fighters had fled. Instead, Obaidullah and his fifteen-year-old son Esmatullah were killed; thirteen others suffered broken bones and shrapnel injuries from head to toe. One boy, fourteen-year-old Ehsanullah, lost both his eyes.”

In a report on civilian casualties, the United Nations Assistance Mission to Afghanistan attributed a rise in civilian deaths in 2019 to an escalation of the U.S. air war in the country. In addition, countless night raids carried out by joint U.S./Afghan forces have struck terror in families whose loved ones were killed in front of them. Ordinary Afghans whom I have met with in the past week are acutely aware of the night raids and link the gruesome pattern of killing civilians to United States trainers and the CIA.

Before Donald Trump pulled back U.S. participation, there had been nine rounds of talks, and the United States special envoy Zalmay Khalilzad was supposedly edging closer to a “peace” deal with the Taliban.

A genuine peace process would hold all warring parties accountable for crimes against humanity and would call for an immediate end to U.S. and NATO militarism in Afghanistan. It would urge the United States to humbly acknowledge the recklessness of its invasion and occupation. Reliable non-governmental parties would be asked to develop ways for Afghans to receive reparations from all countries who’ve participated in the past eighteen years of war. Those responsible for pursuing a genuine peace process would need mentors and advisors. I recommend the Afghan Peace Volunteers.

Anticopyright: Editorials and articles originated on TMS may be freely reprinted, disseminated, translated and used as background material, provided an acknowledgement and link to the source, TMS: A Morning in Afghanistan, is included. Thank you.

One Response to “A Morning in Afghanistan”