Burning Down the House

Far-right governments in the U.S., UK, and Brazil are laying bare their nihilistic roots and full destructive potential. 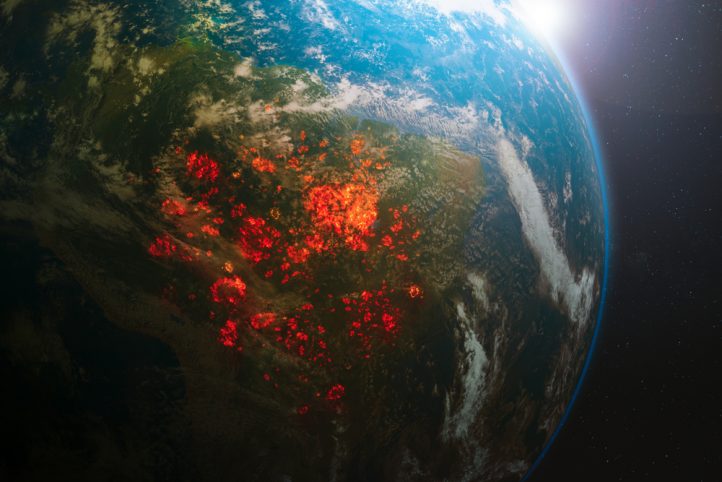 An illustration of the burning Amazon rainforest. (Shutterstock)

As August wound down, the populist troika of Donald Trump, Boris Johnson, and Jair Bolsonaro proved once again that the United States, the United Kingdom, and Brazil would be better off with no leaders rather than the dubious characters that currently pretend to govern these countries.

In all three cases, these leaders escalated their nationally destructive policies this summer in ways that have alienated even their erstwhile supporters. Once again, they have demonstrated that they have no interest in making America, Great Britain, or Brazil great again. They are only interested in doing as much damage as they can before they are ultimately dragged out of office.

Boris Johnson is a bumbling blowhard with but one current obsession: Brexit. He has promised to sever the UK’s relationship with the European Union by October 31 even if it means doing so without a deal that would mitigate the pain of separation.

The Halloween deadline is grimly appropriate. A No-Deal Brexit would make for a blood-curdling horror film. Just slap a Ghostface mask on the British prime minister, give him a knife to cut the umbilicus with Europe, and voila: Scream 5.

Johnson’s latest tactic to get what he wants is to suspend Parliament for five weeks this fall to limit debate on alternatives to his doomsday option. He hopes to make it impossible for parliament to pass even emergency legislation banning a no-deal Brexit. Believe it or not, the British system allows for such maneuvers – so Queen Elizabeth had to give her blessing to the suspension.

When Trump engages in anti-democratic activities, the Republican Party by and large indulges him. Not so in the UK, where even conservatives are up in arms over Johnson’s silent coup. After the prime minister’s announcement of the suspension, the government’s whip in the House of Lords resigned, as did the head of the Scottish Conservative Party. Former Conservative Prime Minister John Major, meanwhile, has pilloried Johnson and joined a legal challenge to the suspension.

This week, Johnson lost his one-vote majority in parliament when Conservative member Philip Lee defected to the Liberal Democrats even as the prime minister was addressing the chamber.

Most parliamentary members, including quite a few Conservatives, oppose a no-deal exit. No matter: Johnson is following Trump’s script by remaking the Conservative Party in his own image, threatening to purge anyone who doesn’t follow his hard line. After losing a vote that will allow parliament to introduce legislation to delay Brexit, Johnson expelled 21 dissidents, including a number of former ministers and one grandson of Winston Churchill.

Now Johnson is talking about holding a snap election in mid-October. The Conservatives are comfortably outpolling Labor, the Liberal Democrats, and the Greens. However, if all the Remain forces unite against Johnson, they could eke out a victory. But Johnson could also promise an election for October 14 and then, surprise, postpone it until after Halloween, making Brexit a fait accompli.

Johnson once said, “Brexit means Brexit and we are going to make a titanic success of it.” Determined to do the wrong thing even though he knows it’s wrong, Johnson is steering the United Kingdom straight into an iceberg. Nigel Farage is his chief navigator, and the rest of the country is clustered on the bow, bracing for impact.

With a second referendum, wiser heads could wrest control of the helm and prevent disaster, but Johnson is doing everything he can to fast-track Brexit on the principle that it doesn’t matter where you’re going as long as you get there fast.

Jair Bolsonaro styles himself the Trump of the tropics. The comparison is apt. Some future poet, in describing the inferno of the present, will stuff Trump, Bolsonaro, and Johnson feet first into the mouth of Satan in the ninth circle. Having stoked the fires of climate change, Bolsonaro will richly deserve such an afterlife.

As The Economist points out, Bolsonaro as a candidate…

promised to end fines for violations of environmental law, shrink the protected areas that account for half of the Brazilian Amazon and fight NGOs, for which he has a visceral hatred. In office, his government has gutted the environment ministry and Ibama, the quasi-autonomous environmental agency. Six of the ten senior posts in the ministry’s department of forests and sustainable development are vacant, according to its website. The government talks of “monetizing” the Amazon but sabotaged a $1.3bn European fund that aims to give value to the standing forest.

As a result of Bolsonaro’s hands-off policy, deforestation in the Amazon has been out of control this year. Emboldened by their president’s actions, Brazilian farmers organized a “fire day” to clear land for planting. “We need to show the president that we want to work and the only way is to knock (the forest) down. And to form and clean our pastures, it is with fire,” said one of the organizers of the Fire Day. The number of fires in the Amazon nearly doubled this year over the same period last year.

It’s not as if the world wasn’t warned. Time magazine put the burning Amazon on its cover exactly 30 years ago!

The impact this time around is straight-forward. The Amazon is a huge carbon sink. Burn it up and global warming will accelerate. There will also be irreversible loss of biodiversity. And the upside? More soybeans, which Brazil can sell to China because the latter is no longer buying the harvests of U.S. farmers.

Oh, and more profits into the pockets of Bolsonaro’s friends in the industries that are paving the paradise of the Amazon and putting up a parking lot.

Donald Trump is a moth that can’t stop itself from flying directly at the flame of fame (or, more accurately, the inferno of infamy). He could stay off Twitter, but instead his tweets piss off one group of voters after another. He could stay away from the press, but his lies, gaffes, and personal attacks are amplified throughout the media universe. Arguably, this is a strategy to solidify the base and reinforce Trump’s reputation as an anti-establishment gadfly.

But there’s no political strategy behind his trade war with China and his impulsive threats last month to further escalate tariffs on Chinese goods. The sectoral damage to his base worries his political advisors: say goodbye to the farm vote, a good chunk of blue-collar voters thrown out of work, and a bunch of average consumers angry at shelling out more money for their holiday gifts.

Worse would be a more general economic recession brought on by this needless trade war, which would doom the president’s reelection chances. Yes, the U.S. economy is due for a “correction,” particularly because of Trump’s tax cuts and over-the-top spending. But if Trump played it safe, he could have probably postponed the recession until after the 2020 election. Instead, he’s doing everything he can to ensure that it makes landfall smack dab during the presidential race.

Trump isn’t just self-destructive. He continued over the last couple weeks to destroy U.S. alliances, most recently by expressing interest in buying Greenland from Denmark. The land wasn’t on the market, as the Danish government reminded the president, which prompted Trump to cancel his trip to the country.

Greenland? Really?! Perhaps Trump was making an indirect acknowledgement of the effects of climate change, attempting a land grab up north to secure a spot for Ivanka and Jared’s summer palace.

Meanwhile, Trump is powering full speed ahead toward climate apocalypse. The administration’s latest move is to remove restrictions on methane emissions, a more potent contributor to global warming than carbon dioxide. The effort is designed to reduce costs for oil and gas companies. But guess what? Even some of the top energy companies are opposed to Trump’s move.

“Last year we announced our support for the direct regulation of methane emissions for new and existing oil and gas facilities,” Exxon Mobil spokesperson Scott Silvestri said. “That hasn’t changed. We will continue to urge the EPA to retain the main features of the existing methane rule.” After all, Exxon, BP, and others are trying to position natural gas as part of the solution to climate change, and the Trump administration is busy undermining this argument.

The methane restrictions that Trump is trying to unravel date back to the Obama administration. But the current administration wants to tear up much older agreements as well. The Clinton administration protected Alaska’s Tongass National Forest from logging and mining. But Trump wants to open up this 16.7 million-acre sanctuary to the usual suspects in the extractive industries. This is no small land parcel. It represents half the world’s temperate rainforest.

Bolsonaro, at least, is only interested in trashing a rainforest (albeit a large one). Boris Johnson is content to trash a country (albeit a rich one). Donald Trump, with that ego of his, aspires to trash an entire planet. Yes, all three will eventually flame out. But not before they’ve scorched the earth clean.

An environmentalist told journalist Alan Weisman before the 2016 elections that she was considering voting for Trump. “The way I see it,” she said, “it’s either four more years on life support with Hillary, or letting this maniac tear the house down. Maybe then we can pick up the pieces and finally start rebuilding.”

The philosophy of “things have to get worse before they get better” has sometimes worked out in the past. But that’s the past.

Unless we stop him, we’ll be rooting around in the post-Trump ashes in vain for the pieces. The house will be gone. And there will be nothing we can salvage to rebuild it.

John Feffer is director of Foreign Policy In Focus at the Institute for Policy Studies. He is the author of several books and numerous articles and has been an Open Society Foundation Fellow and a PanTech fellow in Korean Studies at Stanford University. He is a former associate editor of World Policy Journal and has worked as an international affairs representative in Eastern Europe and East Asia for the American Friends Service Committee. He is the author of the dystopian novel Splinterlands and his latest novel is Frostlands, a Dispatch Books original and book two of his Splinterlands series.