France and Germany Escalate Occupation of Mali and the Sahel

11 Sep 2019 – The French and German governments are expanding their nearly seven-year-old neo-colonial occupation of Mali and the resource-rich Sahel region of western Africa.

At a joint press conference on the sidelines of the G7 summit in Biarritz last month, French President Emmanuel Macron and German Chancellor Angela Merkel announced a new “partnership for the security and stability in the Sahel,” or P3S. The details of the partnership will be released later this year. It will reportedly incorporate more African nations into the occupation of the country, beyond the current G5 Sahel force of Burkina Faso, Chad, Mali, Mauritania, and Niger.

“Faced with the extension of the terrorist phenomenon, we have decided to … increase this support,” Macron said. “All our efforts are obviously useful, but our aim is a change of scale and method.”

There are already approximately 4,000 French troops stationed in Mali, and more than 800 German soldiers operating as part of a United Nations force of over 15,000 military and police personnel. 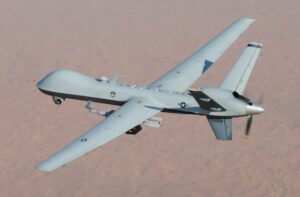 Now this brutal occupation is to be expanded further. Under the cynical and fraudulent banner of the fight against terrorism and protecting the population, the intervention by German and French imperialism is aimed at subjugating the resource-rich region of West Africa, and stabilizing the puppet regime in Bamako against rising opposition among the country’s workers and oppressed masses. The Bamako regime is despised and has a documented record of carrying out summary executions and torture of its opponents.

The French military has already deployed four unarmed surveillance Reaper drones, purchased from the US military, to provide targeting for air strikes and ground operations in the Mali war. In March, the Macron administration announced that by the end of 2019, the French military will deploy armed drones into the country, the first time they will be used anywhere by France. By 2020, they are to be equipped with Hellfire missiles.

The drone attacks will be controlled from a French military base at Niamey, in neighboring Niger. In parallel, the military’s supply of drones will be increased from five units currently to 12 in 2025, and 25 in 2030. This spring, the Cognac air base in southern France will inaugurate its first squadron dedicated to drone warfare, the “Surveillance, reconnaissance and attack squad.”

In other words, the war in the Sahel is the testing ground for French imperialism to develop the methods for wars of occupation in the Middle East and Africa perfected by the CIA and the US military over the past 20 years in Pakistan, Afghanistan and Somalia. The expansion of France’s armed drone fleet makes clear that the ruling class envisages years of uninterrupted wars on a scale eclipsing what is already taking place.

After more than six years, the war in Mali has led to the deaths of at least 6,000 people. It has caused a refugee crisis, with tens of thousands of people forced to flee their homes.

France intervened in January 2013 against a collection of separatist and Islamist forces that gained arms in the course of the NATO war in Libya in 2011 and travelled to northern Mali in 2012. Paris, Berlin and their imperialist allies and local proxies have been unable to achieve their objective of establishing control of northern Mali for the Bamako government. The occupying forces are correctly viewed in the native population as a hostile force tasked with subjugating the country. The Bamako regime they are backing is guilty of horrific crimes against the population.

A report published by Human Rights Watch in April 2018, for example, documented the deaths of at least 27 men and the torture of two others at the hands of the military during a single operation in the Mopti region of central Mali from February to March of that year. It cited “multiple accounts of mass arrests followed by the discovery of common graves.”

The killings targeted the Muslim ethnic Peuhl community. The investigators interviewed relatives in Sokolo who said that the army arrested seven Peuhl men celebrating a baptism on February 21, including the head of the village and several of his family members. Six days later, the Malian government reported that all the men had been killed during “fighting” in the region.

On March 25, residents in Dogo told investigators they had identified six bodies of men in a common grave who had been arrested three days earlier. The local mayor said all the men were known as merchants and had no involvement with armed Islamist groups.

The obvious question is what role French special forces troops played in these and other massacres of civilians or those suspected of harboring sympathies to Islamist or separatist anti-government forces. The occupying powers are in any case implicated in all of these crimes, which are carried out with their knowledge by a government that they are supporting.

Reports of extrajudicial killings and torture by the Malian authorities over the past two years have been met with near-total silence in the French media, which has shown little interest in exposing the reality of the war to workers in France and Europe.

The Bamako regime is also suspected of facilitating an escalating wave of communal killings between ethnic Dogon and Peuhl communities. There have been dozens of massacres in the last six months, including an attack on a Peuhl village on March 23 that killed over 150 people, and a retaliatory massacre in June on a town in Sobane Kou, killing at least 95 Dogons, including dozens of women and children.

The government depends upon the Dogon militia for its security operations, and Malian government forces reportedly either participated in or allowed killings in Peuhl communities, which are majority Muslim. Germany’s Süddeutsche Zeitung newspaper, which supports the war, noted on August 29 that “the state indirectly supports the militias, which are now terrorizing the population, in order to assert its influence in contested regions.”

Communal massacres in towns are now regularly followed by demonstrations against the government. Le Monde, which has supported French imperialism’s war in the Sahel from the beginning, provided a rare glimpse of the hostility to troops in an article published on August 19. The reporters, travelling with a convoy of UN soldiers, noted that after they arrived with tanks and trucks in a majority Dogon village, they were greeted by protests and stones thrown by civilians.

“On the right, a man who arrived at the same time as the [UN] patrol in the town is threatened by the inhabitants. Everyone sees him as a traitor, who guided the blue-helmets there,” it admitted. The townspeople “stood up against the tanks and demanded that the MINUSMA [UN force] leave.” In April, the Malian Prime Minister was forced to resign after a wave of protests.

The war in Mali is part of a new drive by the imperialist powers to subjugate and carve up Africa. French imperialism is also responding to the growing influence of new competitors in the region, including China and Russia. A report published in December 2018, by the Portail de l’intelligence économique (Economic intelligence portal), a think tank closely linked to French intelligence, noted that Chinese investments in Africa, the largest of any country, increased by 1,400 percent between November 2015 and 2016.

It stated that China’s “strategy of influence in Africa resides in putting forward aid ‘without conditions,’ unlike Europe and particularly France.” Its position reflects longstanding fears of French imperialist strategists that France “risks being sidelined from the new international scenario opening up before Africa and is threatened with seeing its economic interests damaged by new parties present in the African economy.”

Mali is a geostrategically critical country in West Africa. Northern Mali, where French occupying forces are concentrated, borders Niger, from where France sources the majority of its uranium supplies. Mali itself contains at least three large deposits of uranium, located in Falea, 200 miles west of Bamako, with an estimated 5,500 tonnes of uranium, and Samit, in the Goa region, with another 220 tonnes.

Mali is now the third largest producer of gold in Africa, after Ghana (located close to Mali’s south) and South Africa. An article published last month by Al Jazeera, entitled “Time for a gold rush in West Africa,” cited Lebohang Sekhokoane, a mining research analyst at South Africa’s Public Investment Corporation. “Low-cost deposits in Mali, Burkina Faso, Guinea and Ivory Coast offer the long-term investment potential the PIC prefers, rather than the five to 10-year lifespan of projects in South Africa, she said.” The analyst added that “When you look at the gold sector in West Africa, that’s where the sun is rising.”