On the Road to Damascus: International Conference in Syria on Sanctions and Its Blowback

20 Sep 2019 – “Welcome to your second country” was the greeting our Syrian hosts gave us when we arrived for the International Trade Union Forum for “solidarity with the workers and people of Syria against the economic blockade, imperialist interventions, and terrorism.”

Throughout my short one-week stay, Syrians, on seeing I was a foreigner, would muster their best English to ask where I was from. Invariably upon hearing that I was from the US, the questioner would shake my hand, touch hand to heart, and say “welcome.” Ironically, these victims of the US-backed war of regime change and economic sanctions went out of their way to extend their hospitality to us, while the jihadists, whom the US has been arming, training, and implicitly backing, are the ones who, at least according to George W. Bush, “hate us.”

After their expansive hospitality, the most striking aspect of the Syrians I encountered was their pride in their country’s culture of diversity and tradition of a secular state. Mosques of various denominations were cheek to jowl with a variety of Christian churches.

Although I was not permitted to photograph military personnel, no restrictions limited our activities or where we could go, though we stayed mainly in the vicinity of Damascus. I was free to either travel on my own or to accept the offers of our hosts to show us the sights.

For all the reality of over eight years of vicious war, life appeared normal. Damascus had the appearance of a bustling world capital; in fact, it is the oldest continuously occupied capital in the world. I didn’t encounter US fast food restaurants or see any skyscrapers. Thriving commerce and a remarkable diversity of dress and ethnicities were everywhere. The antiquities of this ancient city were not antiseptically preserved behind museum glass, but part of the living landscape. Houses built into the old city wall were still inhabited.

As a Syrian university student proudly explicated about her homeland: “We are a country where people resist any colonialism; we have 9,000 years of culture.” 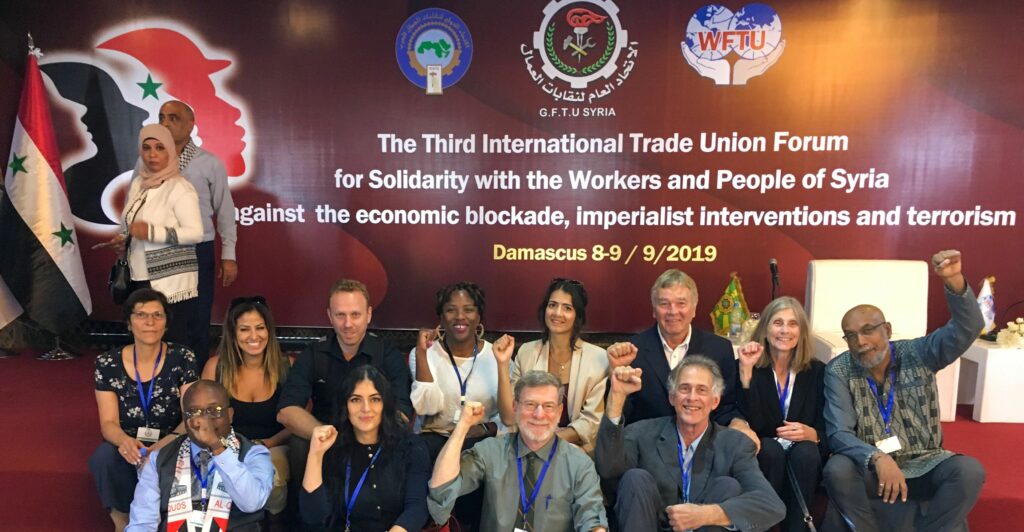 The two-day conference addressed the illegality under international law of economic sanctions and other coercive measures, as well as the effects of the blockade on the people of Syria. The importance of solidarity was emphasized in confronting imperialist interventions that aim at undermining the security of peoples and the sovereignty of states. The role of trade unions, civil society, and media was recognized in exposing the political hypocrisy of states that claim to fight terrorism while supporting it in reality.

The conference opened with a welcoming address by Syrian Prime Minister Imad Khamis and was attended by other government officials and members of the governing party. If there were any security precautions for these high-level dignitaries, they were invisible to me.

Noting that the “US spends more on national defense than China, Russia, the United Kingdom, France, Japan, Saudi Arabia and India combined,” Baraka explained that the “theft of public resources for the military and militarism domestically and abroad represent a one-sided class war waged on the working class in the US. The six trillion dollars spent on US wars since 2003 are resources that could have been directed to address the increasing desperate plight of workers and poor people in the US.”

The final declaration of the conference called for the closure of US and Turkish bases in Syrian territory, withdrawal of uninvited foreign forces from Syria, the cessation of aggressive US-alliance air raids, and solidarity with similarly US-sanctioned Venezuela, Nicaragua, and Cuba.

The Jerusalem Post on September 9, the second day of the conference, had already trolled social media to discover that reporter Max Blumenthal “claimed (emphasis added) that he was in Damascus at the General Federation of Trade Union conference.” The Israeli newspaper criticized Blumenthal for investigating “regime-held areas” by actually visiting them. Similarly criticized were Lebanese-American journalist Rania Khalek (also at the conference) for a visit to Syria in 2016 and US Representative and Democratic presidential primary candidate Tulsi Gabbard for a visit the following year. Presumably, the Syrian Observatory for Human Rights, funded by the British Foreign Office and run by a clothing dealer out of his home in Coventry, England, is where they should have gone for information on the Middle East.

The blowback experienced by Donald Lafleur has been far more vehement. He has been threatened with losing his position as executive vice president of the 3.3 million-member Canadian Labour Congress. The Canadian National Post newspaper, whose journalism on the Middle East is not simply a fallback to the Cold War but to the Crusades, attacked Lafleur for attending the conference with “neo-Stalinist ‘anti-war’ zombies.” The veteran postal worker, traveling to Syria on his own dime and time, had the temerity to express solidarity with fellow workers instead of with the bourgeoisie the National Post so loyally champions.

Hassan Yussuff, President of the Canadian Labour Congress, attacked Lafleur for calling for an end of punishing and illegal sanctions on his fellow workers in Syria. Ken Stone of the Congress of Union Retirees of Canada responded:

“If we believe in democracy, trade unionists can visit another country without accepting our government’s positions on international affairs. In fact, a healthy trade-union movement would offer a different analysis of world issues than Canada’s government, which is subservient to corporations. The solidarity actions of a leading trade unionist serve as an example to us all in removing barriers of distrust and misunderstanding, permitting us to learn from the struggles of the Global South.”

Also attacked by the National Post for attending the conference were “Kremlin-friendly” journalists Max Blumenthal and Anya Parampil with The Grayzone, anti-war activist Fra Hughes from Belfast, and “Lebanese-Californian” Paul Larudee with the Syria Solidarity Movement. (Larudee was actually born in Iran, but the distinction between Arabic-speaking Lebanon and Farsi-speaking Iran is too subtle for the National Post.)

Security-wise, it was a lot easier to get into the presidential palace to meet with Syrian President Bashar al-Assad than it is to take a commuter plane from San Francisco to Los Angeles. The president individually greeted each one of us as we entered. He thanked a German delegate for his country’s acceptance of Syrian refugees. The German, in turn, mock-implored Assad to “take me in.”

After apologizing for keeping us waiting while he shook hands with each one of us, Assad explained that 90% of Syria had been “liberated” and the intention was to regain the entirety of the national territory. Final victory, however, would not come until all Syrians are won over to national unity.

Syria, according to Assad, is socialist where workers are in “partnership with the state” and are the “leading section” of the society. Minimal medical care and education are free in Syria, even during the height of the war.

Assad explained that the gap between capitalists and those who produce the wealth – the working class – has widened internationally since the 1970s and particularly after the collapse of the Soviet Union. Workers paid the price for the world capitalist financial crisis of 2008.

“Conflicts,” Assad noted, “won’t end in the near future” but “Syria is not isolated.” The US, he explained, does not enjoy the monopoly of technology that it held 20 years ago.  Today a new network of relationships is developing among Brazil, China, Russia, India, and the small states of the world. The US, he warned, may end up blockading itself.

The 2-hour meeting, including a robust Q&A, concluded with Assad’s recommendation to “teach reality.”

One View of a Complex Picture

“In the west, are people stupid or are they just thinking stupidly?” asked a young Syrian woman. We were at Damascus University after the conference. An Australian conference attendee, Tim Anderson, had just spoken to a standing-room-only crowd on his book Axis of Resistance: Towards an Independent Middle East. In response to her question, Anderson explained how the western mass media paints a particular view of the complexity of Syrian reality.  “Imperial cultures have tried to normalize war in the 21st century,” adding “regime change is a soft term for a war of aggression.”

For the Syrians I met, their president, Bashar Al-Assad, was seen as the guarantor of national unity in the face of aggression from abroad. Many were the stories of friendly encounters with the president and his family. It may well be that those who held contrary views did not express them to foreigners, but those who did seemed genuine in their personal affection for the person they regarded as their leader in these times of peril.

My experience on the road to Damascus was also one view of a complex picture, a view not often seen in the West. But whatever view one takes in the Syrian conflict, the US policy of economic sanctions, restricting access to food and medicines, is an illegal and unconscionable collective punishment of the Syrian people.

Roger Harris is a member of the TRANSCEND Network and the immediate past president of the Task Force on the Americas, a 33-year-old human rights organization in solidarity with the social justice movements of Latin America and the Caribbean. He is active with the Campaign to End US-Canadian Sanctions against Venezuela.

Anticopyright: Editorials and articles originated on TMS may be freely reprinted, disseminated, translated and used as background material, provided an acknowledgement and link to the source, TMS: On the Road to Damascus: International Conference in Syria on Sanctions and Its Blowback, is included. Thank you.

3 Responses to “On the Road to Damascus: International Conference in Syria on Sanctions and Its Blowback”