Trump has been reprehensible in pandering to white racism. But the Republicans have no monopoly on this franchise. We should remember the legacy of Jim Crow and Dixiecrat Democrats in high office including six US senators and two Supreme Court justices who were members of the Ku Klux Klan. FDR, arguably the most liberal US president and a Democrat, force relocated and incarcerated in concentration camps 120,000 Japanese Americans, including orphaned children and people with as little as 1/16th Japanese ancestry.

29 Jan 2020 – As predictable as death and taxes is the quadrennial injunction from liberals for progressive third parties to cease and desist. Trump is the hook; the Dems are the bait. Don’t swallow it and get reeled in by the two-party duopoly. A better world is possible.

22 Jan 2020 – The campaigns of Bernie Sanders and Tulsi Gabbard, and before them Occupy, point to a popular insurgency. Mass protests of the dispossessed are rocking France, India, Colombia, Chile, and perhaps here soon.

6 Nov 2019 – The Sierra Club–long a retrograde proponent of saving the planet by driving a Tesla, eating wild caught salmon, and voting blue–took positive environmental leadership with their end of the year issue of the Sierra magazine. Stating it is “time to fix the population fixation,” they examine the interactions of population, climate change, and inequality. 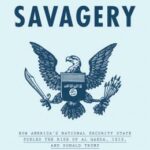 19 Oct 2019 – Max Blumenthal’s ‘The Management of Savagery’ provides a cogent explanation for the US wars in Afghanistan, Iraq, Somalia, Sudan, Yemen, Libya, and Syria with Iran on the to-do list. Savagery reads like a real-life whodunit tracing the shadowy back channels of the CIA, FBI, DIA, and NSA piping jihadists around the greater Middle East to create chaos only to find their assets turning against them. Besides being well written, the analysis of the maturation of the neoliberal imperial project by the world’s sole remaining superpower illuminates the current bi-partisan consensus for militarism.

There are higher callings than merely winning the presidency for good servants of the empire. But would Trump have been so compliant? Maybe not. So, impeachment is in order to either chasten him to faithful obedience or get rid of him. 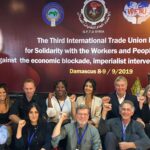 On the Road to Damascus: International Conference in Syria on Sanctions and Its Blowback
Roger D. Harris – TRANSCEND Media Service, 23 Sep 2019

20 Sep 2019 – Security-wise, it was a lot easier to get into the presidential palace to meet with Syrian President Bashar al-Assad than it is to take a commuter plane from San Francisco to Los Angeles. The president individually greeted each one of us as we entered. He thanked a German delegate for his country’s acceptance of Syrian refugees.

5 Jul 2019 – The U.S. is currently unilaterally sanctioning not only Venezuela but also some 30 other countries. The increasing danger of major power confrontation and consequently of world war urgently calls for building a unified movement against militarism, because only a peace movement within the U.S. can overcome this war mongering.

Reading Reuters between the Lines: Why the US Puppet President of Venezuela Is Toast
Roger D. Harris – MintPress News, 8 Jul 2019

4 Jul 2019 – A critical reading between the lines of a Reuters article confirms that Washington has failed to cobble together a united opposition in Venezuela that is popular enough to win in the polls, likely signaling the end for Juan Guaidó. 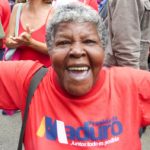 7 Jun 2019 – Hugo Chávez was elected president and initiated what has become known as the Bolivarian Revolution, which has inspired the peoples of the world while engendering the enmity of both the US imperialists and the Venezuelan elites. This article explores the contributions, shortcomings, and lessons of the Bolivarian Revolution’s two decades, in the context of the US regime-change efforts from its inception to current attempts by the US to install the unelected Juan Guaidó as Venezuela’s president.

18 May 2019 – AI fails to put its claims against the Maduro government in the context of a concerted regime-change campaign. The US is waging an illegal war against Venezuela and AI’s broadside leaves out this inconvenient fact, even omitting any mention of sanctions. This is not the first time AI has shown an imperial bias as it has regarding US-backed regime-change projects in Iraq, Libya, Syria, and Nicaragua.