Venezuela’s Bolivarian Revolution in the Crosshairs of US Imperialism

7 Jun 2019 – With the likes of John Bolton and Elliot Abrams directing US foreign policy, the US government has abandoned all pretense of “plausible denial” for its illegal regime-change initiatives. The “humanitarian” bombs may not be falling but, make no mistake, the US is waging a full-bore war against the Bolivarian Revolution in Venezuela.

Back in 1998, Venezuela had had nearly a half a century of two-party rule. A duopoly, not unlike the Republican and Democratic parties in the US, alternated in power imposing a neoliberal order. Poor and working people experienced deteriorating conditions of austerity regardless of which party was in power.

Then third-party candidate Hugo Chávez was elected president. HeH He initiated what has become known as the Bolivarian Revolution, which has inspired the peoples of the world while engendering the enmity of both the US imperialists and the Venezuelan elites.

This article explores the contributions, shortcomings, and lessons of the Bolivarian Revolution’s two decades, in the context of the US regime-change efforts from its inception to current attempts by the US to install the unelected Juan Guaidó as Venezuela’s president. 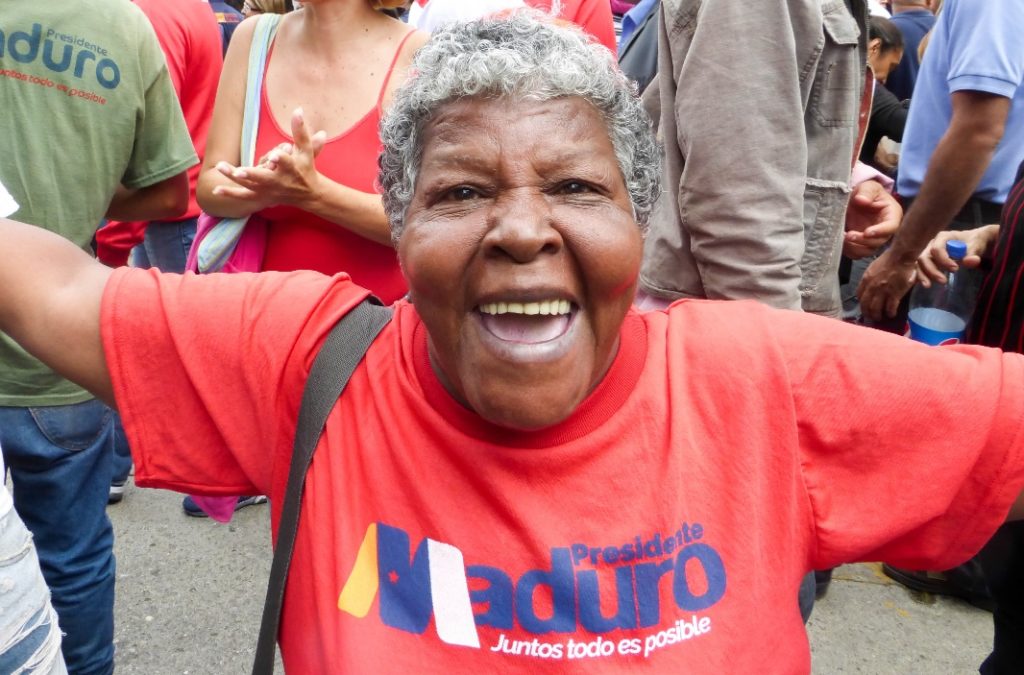 In Venezuela, Chávez revised his country’s history and thereby wrought a sea change of national consciousness. Prior to Chávez, Venezuela was arguably the most sycophantically pro-US country in South America. Miami was looked to for cultural affirmation; baseball was the national pastime.

Chávez took special inspiration from the leader of the South American struggle against Spanish colonialism and named his project after Simón Bolívar, known as the “Liberator.” Bolívar was not merely a national leader, but a true internationalist. The Bolivarian project is about the integration of nations based on mutual respect and sovereignty. Bolívar presciently declared in 1829: “The United States appears to be destined by Providence to plague Latin America with misery in the name of liberty.”

This new Venezuelan national identity and consciousness, based on their history told from the bottom up, may prove to be the most lasting legacy of the Bolivarian Revolution. 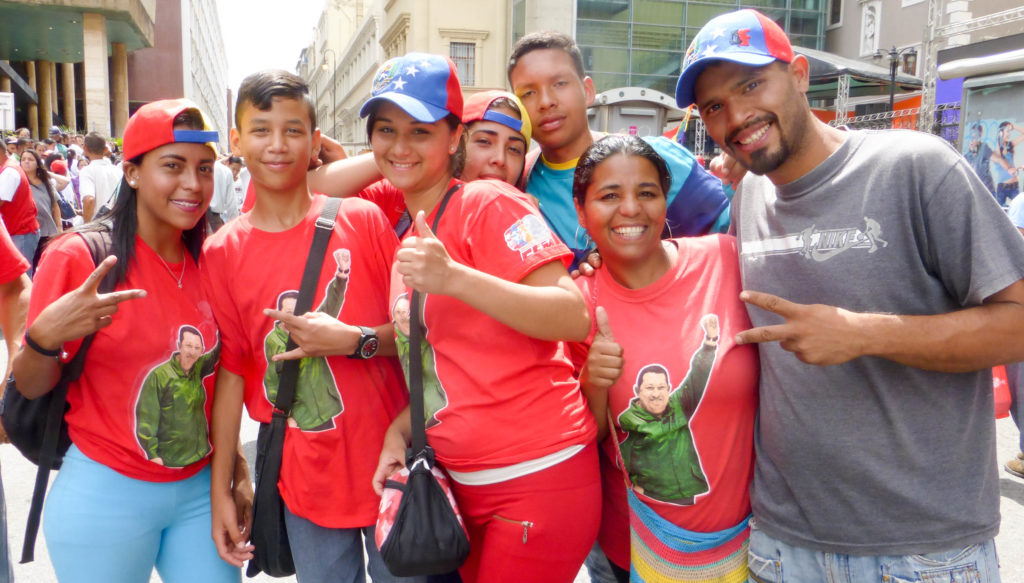 As professor of Latin American history at NYU Greg Grandin observed, this inclusiveness has awakened “a deep fear of the primal hatred, racism, and fury of the opposition, which for now is directed at the agents of Maduro’s state but really springs from Chávez’s expansion of the public sphere to include Venezuela’s poor.”

For example, when an opposition demonstration came upon an Afro-descendent street peddler, he was presumed to be a chavista because he was dark-skinned and poor. The opposition demonstrators poured gasoline over him and set him on fire. Then the horrific image was posted on social media.

A less gruesome example occurred at the Venezuelan Embassy in Washington, DC. North American activists in solidarity with the Bolivarian government protected the embassy in accordance with international law from being usurped by representatives of US-backed Juan Guaidó for 36 days. Before the protectors were evicted by the US Secret Service on May 16, counter-protesting opposition expatriate Venezuelans would wave bananas at African American solidarity activists, chanting “go back to the zoo.” Such is the racist loathing that fuels the Venezuelan opposition. 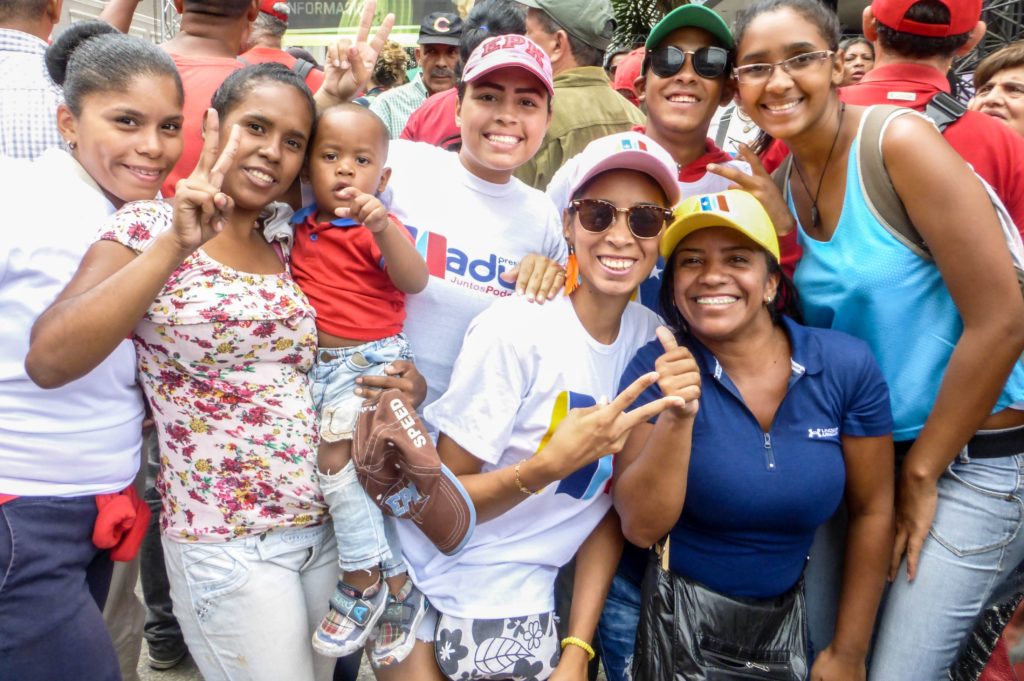 The Bolivarian project had halved poverty and cut extreme poverty by two-thirds, while providing free health care and education. On May 27, the United Nations cited Venezuela as one of the top countries for guaranteeing the right to housing, recognizing the over 2.5 million public housing units built.

The Bolivarian project has experimented in what is called “protagonistic democracy”: cooperatives, citizens councils, and communes. Some succeeded; others did not.  One of the first priorities was to eradicate illiteracy. The Bolivarian state has promoted community radio stations, low-cost computers, internet cafés for senior citizens, and other venues for popular expression. Venezuela now has one of the highest rates of higher education attendance in the world. These are not the hallmarks of a dictatorship.

This was not the primary transgression placing Venezuela in the crosshairs of US imperialism. Promoting socialism may be regarded as blasphemy, but the original sin is the following.

When the small fish organize, the big fish gets nasty. Above all, this is why the world’s hegemon has targeted Venezuela.

The traumatic transition from Chávez to Maduro

Chávez, suffering from cancer, died on March 5, 2013. The reaction in Venezuela was polarized. The elites danced in the street. The majority, composed mainly of poor and working people, were traumatized.

The bully to the north, smelling blood, saw an opportunity. The US had conspired to overthrow the Bolivarian Revolution from the beginning, backing a short-lived coup in 2002 followed by a boss’s strike. With the passing of Chávez, the imperialist offensive doubled down.

A snap election was called according to the Venezuelan Constitution for April 14 to replace the deceased president. Chávez, anticipating his demise, had designated Nicolás Maduro as his successor. Although polls had shown Maduro with a 10% lead going into the election campaign, he won with a narrow 1.5% margin.

I was in Caracas as an election observer when Maduro won. My observation of the election was like that of former US President Jimmy Carter, who had declared a year before that of the 92 elections the Carter Center had observed, “The election process in Venezuela is the best in the world.”

Within minutes of the announcement of Maduro’s victory, the main opposition candidate, Henrique Capriles, came on TV to denounce the election as fraudulent and call on the people to “show their rage.” Thus began the opposition’s violent offensive, the guarimbas, to achieve by violence what they could not achieve in democratic elections.

The opposition charges of fraud were investigated by Venezuela’s National Electoral Council (CNE) and found groundless, based on a 100% audit of the electronic vote backed up with paper receipts. Capriles still maintained the charge of fraud, and the US became the sole nation to refuse to recognize the Maduro presidency. The opposition violence continued, taking over 40 lives.

Upon assuming the presidency, Maduro inherited existing problems of crime, inefficiency, corruption, inflation, and a dysfunctional currency exchange system. These were problems that existed during the Chávez period and even prior to that. These problems persist in varying degrees to the present, despite concerted programs to address them.

President Maduro has had his feet held to the fire by the imperialists from the get-go. Far from having a respite, shortly into his presidency, Venezuela was hit with petroleum prices plummeting from a high of nearly $125/barrel to a low of close to $25/barrel. Despite efforts to diversify the economy, Venezuela remains dependent on oil exports for most of its foreign exchange, which is used to fund the social programs.

The US regime-change war continues to intensify with increasingly harsh sanctions. These unilateral measures are illegal under the charters of the United Nations and the Organization of American States, because they constitute collective punishment. Trump’s security advisor, John Bolton, elucidates: “It’s like in Star Wars, when Darth Vader grips someone. That’s what we’re doing economically with the (Venezuelan) regime.”

In 2013, the US waited until after the presidential election in Venezuela to declare it fraudulent. Taking no chances, the US declared the 2018 election fraudulent four months before it was held. Joining Trump in this rush to pre-judgement were eleven Democratic senators including Bernie Sanders.

The charges of fraud were based on three issues: setting the date of the election, disqualifying opposition parties, and barring opposition candidates. Maduro had continually called for dialogue with the opposition to set the election date. But each time a date was mutually agreed upon, the opposition backed out after their US handlers intervened. As for the disqualified parties, they had lost their ballot status because they had boycotted past elections. They then refused to reapply for ballot status, because their intention was not to participate in the electoral process.

Opposition candidates, namely Leopoldo López and Henrique Capriles, were barred from running, because they had committed criminal acts that warranted their exclusion. López clearly incited violence that resulted in deaths and would have received far harsher treatment had he committed such acts in the US. Capriles was convicted of economic fraud, “administrative irregularities,” during his tenure as a state governor. While the courts found Capriles guilty, this action against a political opponent damaged the Maduro government’s international image.

Overall, the charges of fraud by the radical right opposition were mainly pretenses to delegitimize the upcoming election. However, several moderate opposition candidates did run, defying the US demand that the election be boycotted.

Henri Falcón was the leading opposition candidate to run in 2018, championing a neoliberal platform of privatization, austerity for workers, and subservience to the International Monetary Fund (IMF). The US, which would ordinarily gleefully embrace such a platform, instead threatened Falcón with sanctions for breaking the election boycott.

The explanation for this seemingly anomalous behavior by the US government is that the stakes in Venezuela are much higher than just the presidency. The regime-change project is to exterminate the Bolivarian Revolution, reverse its social gains, and return Venezuela to a subservient client state where the world’s largest oil reserves would be freely exploited by US corporations.

As CEO of the capitalist world order (that is what is meant by exercising “American world leadership”), then US President Obama declared in 2015 that Venezuela constituted an imminent and extraordinary threat to US national security. He didn’t mean a military or even an economic threat. That would have been preposterous. What Obama was implicitly confirming is that Venezuela poses a “threat of a good example.” Venezuela is at the top of US imperialism’s hit list because of the good things, not for its faults.

President Trump has intensified Obama’s regime-change policies aimed at Venezuela. Condemning the Bolivarian Revolution, Trump opined: “Socialism is not about justice, it’s not about equality, it’s not about lifting up the poor.” Might he have been really thinking of capitalism? His national security advisor John Bolton tweeted that removing the democratically elected President Maduro by violent coup and installing the US-anointed and unelected Guaidó is protecting the Venezuelan constitution.

On the other side of the aisle, Senator Sanders accused Chávez of being a “dead communist dictator.” Alexandria Ocasio-Cortez described the US regime-change war as a contest of “authoritarian regime versus democracy,” with the questionable presumption that the US is the democracy.

In the Orwellian terminology of US politicians and corporate media, a fraudulent election is one where the people vote their choice. A dictator is the democratically elected choice of the people. And the so-called dictator is an authoritarian if he resists rather than surrenders to the bullying power.

Surrender does not appear to be on the agenda for the Bolivarian Revolution, with US asset Guaidó forced to negotiate in Norway after his failed coup attempts. Despite the suffocating sanctions and threats of military action, the poor and working people in Venezuela who are most adversely affected by the US war against them remain the strongest supporters of their elected government.

Roger Harris is a member of the TRANSCEND Network and the immediate past president of the Task Force on the Americas, a 33-year-old human rights organization in solidarity with the social justice movements of Latin America and the Caribbean. He is active with the Campaign to End US-Canadian Sanctions against Venezuela.

Anticopyright: Editorials and articles originated on TMS may be freely reprinted, disseminated, translated and used as background material, provided an acknowledgement and link to the source, TMS: Venezuela’s Bolivarian Revolution in the Crosshairs of US Imperialism, is included. Thank you.