‘The Management of Savagery’: Greater Middle East Project of Chaos

The Management of Savagery by Max Blumenthal, 2019, Verso 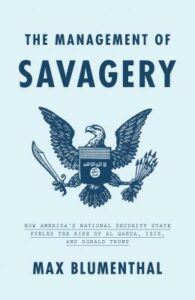 19 Oct 2019 – Destination Afghanistan was known as the big easy back in the halcyon days of the late 1960s. Hippies from throughout the affluent West hitchhiked to the capital, Kabul, where crash pads and hashish were cheap, and the locals were tolerant. Life appeared to be mellow in the scenic shadow of the Hindu Kush Himalayans. That was then.

Now Afghanistan is engulfed in year 18 of the forever US war with no end in sight. The war has gotten so old – the longest in US history – that the Pentagon PR flacks changed the code name from Operation Enduring Freedom to Operation Freedom’s Sentinel to spruce up its image.

Half of Kabul is now in rubble. Music, education for girls, and cultivation of opium poppies are prohibited in areas controlled by the former US-allied Taliban. US-backed warlords in the rest of this devastated land supply the majority of the world’s illicit heroin, visiting a plague of drug addiction on nearby Iran, China, and Russia – official US enemies – and on the ghettoes, rural wastelands, and hipster dens of the West. US attempts at “reconstruction” of Afghanistan have cost $117 billion, eclipsing the price tag of the entire Marshall Plan for Europe.

So why is the US still in Afghanistan? The official explanation has something vaguely to do with the arch villain Osama bin Laden from Saudi Arabia who was last holed up in Pakistan before reportedly being assassinated by US special forces and unceremoniously dumped into the sea eight years ago.

Max Blumenthal’s The Management of Savagery provides a far more cogent explanation for the US wars in Afghanistan along with Iraq, Somalia, Sudan, Yemen, Libya, and Syria with Iran on the to-do list (and may be on the war list by the time this article gets posted). Savagery reads like a real-life whodunit tracing the shadowy back channels of the CIA, FBI, DIA, and NSA piping jihadists around the greater Middle East to create chaos only to find their assets turning against them. Besides being well written, the analysis of the maturation of the neoliberal imperial project by the world’s sole remaining superpower illuminates the current bi-partisan consensus for militarism.

The politics of chaos

The collapse of the Soviet Union left a geopolitical power vacuum and an opportunity for the US to more aggressively exert its imperial will. The ensuing politics of chaos produced some strange bedfellows: “human rights” thinktanks with Gulf monarchies, anti-Semites with Zionists, the US security state with jihadists, and neoconservatives with establishment liberals.

Bin Laden, according to Savagery, had a master plan to create “full chaos” in the greater Middle East, which he believed would precipitate the collapse of local regimes so that the culture of jihad could supersede them. Dovetailing this scenario was the neocon plan for regime change in regional states not subservient to US dictates and Israeli expansion. “In the global war bin Laden envisioned,” Blumenthal reports, “these [US] foreign policy fanatics would make the perfect partners.” Leading the charge were neocon Republicans like John Bolton and Elliot Abrams with the Project for the New American Century (PNAC), later to be joined by liberal Clinton Democrats.

Both foreign jihadists and domestic militarists needed a precipitating incident, what the PNAC envisioned as a “catastrophic and catalyzing event.” That came with 9/11. Blumenthal finds credence that the US government likely had some foreknowledge of the attacks, but accuses some Truthers of inadvertently running interference “for the imperialist power they claimed to disdain” by “omitting any historical discussion of the American government’s relationship with the forces directly implicated in the attacks.”

The Authorization for the Use of Military Force was passed just five days after 9/11 as a joint resolution of Congress with only one dissenting vote. “Congress thus voluntarily abdicated its constitution authority and,” according to Blumenthal, “gave its blessing to America’s forever war.” The Patriot Act followed a month later, “granting the executive branch unprecedented wartime powers to investigate and prosecute Americans.”

The neocons and the alt-right have been able to mainstream anti-Muslim politics in the US. Meanwhile the liberal “responsibility to protect” (R2P) doctrine has created popular support for forever war “by weaponizing the discourse of human rights to justify the use of force against governments that resisted the Washington consensus.” The R2P liberals achieved what the right could not.

“In the era of Russiagate, when so many liberals cling to institutions like the FBI and NATO as guardians of their survival,” Blumenthal explains, “the dastardly record of America’s national security mandarins has been wiped clean.” The forever wars are “marketed to the Western public as clinical exercises in freedom-spreading” with a “dual layer patina of patriotic hoopla [for the right] and humanitarian goodwill [for the liberals].”

The refugee crises coming out of the Middle East, generated by the forever wars and accompanying economic sanctions (more accurately, illegal unilateral coercive measures), have consequently fueled xenophobia both in the US and abroad. This, in turn, has fostered an ascendant wave of rightists. “Trump’s election,” Blumenthal contends, “would not have been possible without 9/11 and the subsequent military interventionism conceived by the national security state.”  The national security state did not arise with Trump, but “has maintained a steady continuity between successive administrations.”

Unwanted refugees are not the only inconvenient byproduct of the forever wars in the greater Middle East. The US security state’s alliance with jihadists to overthrow the Soviet-friendly government in Afghanistan – a pattern which is has been repeated in each subsequent Middle Eastern misadventure – has created a “disposal problem” of what to do with these US-armed combatants.

For Americans, the tragedy of 9/11 was just the most dramatic example of the “disposal problem.” “The plague of international jihadism that the United States helped to unleash through its covert interventionism in Cold War-era Afghanistan,” Blumenthal warns, “was to expand and metastasize…”

The neoliberal imperial project, a symbiotic association of liberal “military humanism” and rightwing straight-up militarism, is now showing signs of undoing according to Blumenthal:

“Through covert operations and overt invasions, America’s national security state had destabilized entire regions, from the Levant to North Africa, unleashed a migration crisis of unprecedented proportions onto Europe and spurred an inevitable right-wing backlash that was unraveling the neoliberal consensus they sought to protect.”

In a critical review of Savagery, Louis Proyect finds himself “in agreement” on Afghanistan and Libya but not on Syria. Proyect rejects the analysis that the purpose of the US is or ever was regime change of the Assad government in Syria: “with the regime still intact, it might be obvious that this was never the goal.”  Proyect dismisses what otherwise the purpose of the US war effort might be with a “let’s leave that aside.” In contrast, regime change is the central thesis of Blumenthal’s book.

Proyect accuses Blumenthal of being “one of Assad’s biggest supporters on the left,” though a reading of Savagery would suggest Blumenthal is not an apologist for the governments targeted by the US for regime change. In an interview after his recent visit to Syria, Blumenthal commented: “Whether or not Syria is a dictatorship or a police state; I would not dispute that at all.” Rather, the focus of Savagery is on the policies and actions of the US and its allies, the deleterious effects it has had on the people of the region, and the blowback it has had at home.

A critique in the Times Literary Supplement, from a liberal “humanitarian imperialism” point of view, kvetches:

“It is easy to blame the United States for many of the world’s ills: easy because of the availability of evidence. It is also easy to overstate your case, with misleading or one-sided examples – the trap that Max Blumenthal falls into in The Management of Savagery.”

Which raises the question of why, given “the availability of evidence,” the TLS and its co-conspirators in the corporate media unerringly fall into the opposite trap of being sycophants of the Empire? Why have they failed to connect the dots, as Blumenthal has, and shown “how America’s national security state fueled the rise of Al Qaeda, ISIS, and Donald Trump”?

Roger Harris is a member of the TRANSCEND Network and the immediate past president of the Task Force on the Americas, a 33-year-old human rights organization in solidarity with the social justice movements of Latin America and the Caribbean. He is active with the Campaign to End US-Canadian Sanctions against Venezuela and is on the state central committee of the Peace and Freedom Party, the only ballot-qualified socialist party in California. He recently visited Syria for an international conference on the impacts of economic sanctions by the US and its allies on over 30 countries in the world.

Anticopyright: Editorials and articles originated on TMS may be freely reprinted, disseminated, translated and used as background material, provided an acknowledgement and link to the source, TMS: ‘The Management of Savagery’: Greater Middle East Project of Chaos, is included. Thank you.

One Response to “‘The Management of Savagery’: Greater Middle East Project of Chaos”