The Advance of Designer Viruses in Agriculture

Scientists believe designer viruses created in the laboratory can help the agricultural industry deal with pathogens and extreme weather. A vast experiment is currently being planned. But can the viruses be controlled? 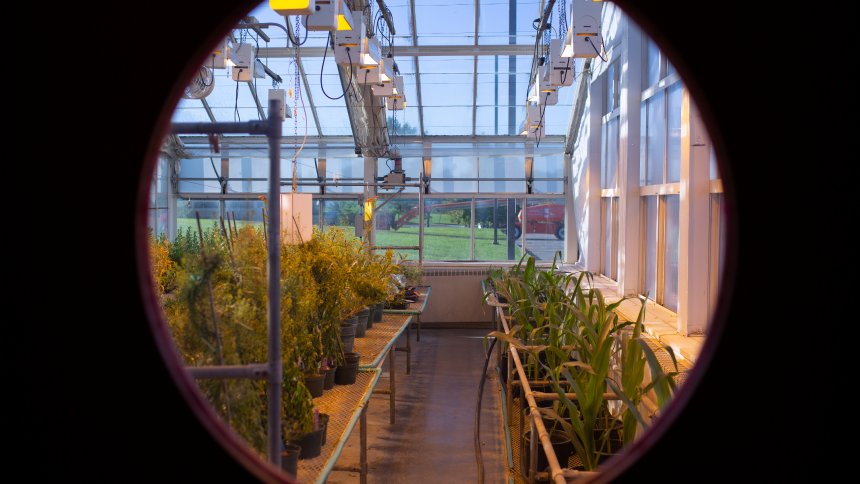 24 Sep 2019 – When the biologist Michael Irey was called out to a pomelo orchard on the outskirts of Miami in 2005, he had a feeling that a catastrophe was brewing. Irey, who worked for the U.S. Department of Agriculture at the time, had been sent out to confirm a suspicion. He took a look at the leaves of one of the trees and saw the spots and yellow leaf veins.

There was no doubt: Huanglongbing had spread to the United States.

Also known as citrus greening disease, huanglongbing is a bacterial plant disease wherein the bacteria disrupt the nutrient transport system, essentially starving the plant. Leaves change color first and then the tree produces stunted, bitter-tasting fruit. After a few years, many infected trees die. “And we knew from other countries how fast the disease spreads,” Irey says.

Just a few days after the initial discovery, USDA staff found two additional cases, this time in orange plantations. Soon, the disease had spread across Florida. Orange production in the state has plunged by around 70 percent since 2005. If the disease continues to spread, Florida may soon grow no oranges at all.

Orange producers, not surprisingly, went on war footing — including Southern Gardens Citrus, Irey’s current employer. The company is an industry heavyweight, producing orange juice for brands like Tropicana and Minute Maid. Workers felled the infected trees and began spraying twice as often as they used to. They also gave the trees additional nutrients and conducted tests with antibiotics. But nothing really helped.

Then, Michael Irey heard about designer viruses for the first time.

The creation of custom-designed biological assistants is among the greatest promises of synthetic biology. Scientists dream of one day being able to construct viruses or bacteria from a collection of building blocks. Like a molecular delivery service, the viruses would deliver their genetic material to the cells of plants, animals or even people, where they would then fulfill their mission: boosting the production of certain proteins or directly manipulating the cell’s genetic makeup.

The technology’s potential promise for agriculture is enormous. Plant viruses that pose no danger to humans could protect olive orchards and orange plantations from disease or shield staples like corn and rice from the effects of drought or strong rains. And they could be deployed rapidly. Viruses could help farmers prepare their plants for possible threats as early as the germination phase — and humans could get the upper hand on nature faster than ever before.

In Florida, Southern Gardens Citrus began working on the super-viruses together with other scientists. In Europe, an association of 17 research institutions and companies receive more that 3 million euros from the EU to study the potential of such viruses for the agricultural industry. And some scientists in the U.S. have even taken a step further: They are breeding aphids and leafhoppers that will have the ability to transmit the viruses to plants. The program, which receives financing from the U.S. government’s Defense Advanced Research Projects Agency (DARPA), is called Insect Allies.

But those allies, it is feared, could turn into unwanted enemies. 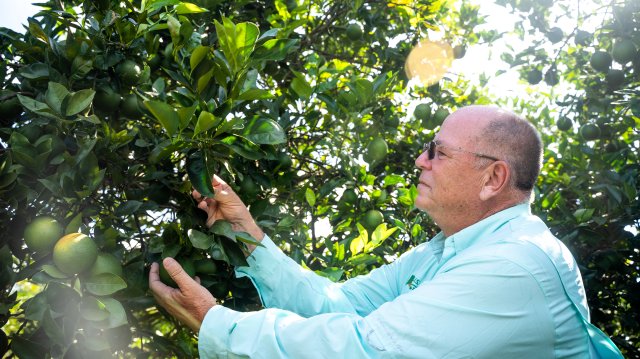 Experts are concerned that the gen-tech viruses could be transmitted to other plant species and begin spreading uncontrollably. Some scientists have also issued a warning aimed specifically at the DARPA program that the technology could fall into the wrong hands and be transformed into a dangerous biological weapon. Indeed, the line between high-tech helper and horrific threat appears to be a fine one.

On the shoulder of a four-lane highway in southern Florida, Michael Irey unlocks a gate with a sign: “Notice! This gate must be kept locked!” Irey drives his pickup down a dusty dirt track, which comes to an end after a couple of kilometers at an orchard with 12 rows of orange trees. Irey says the location of the orchard is secret “for reasons of security.”

Here, not far from the town of Clewiston, a unique type of orange tree is growing. They have been infected with a designer virus created in a laboratory. Irey says the trees represent his greatest hope.

A sturdily built man, Irey walks down the rows of trees, which are still young and only reach to his shoulders. The leaves on most of them are verdantly green and Irey points to the unripe oranges. “This is the first year that they are bearing fruit,” he says proudly.

Irey is working on the tree experiment with scientists from the University of Florida. The university researchers cloned a virus called citrus tristeza, which is present in almost all orange trees in Florida but is harmless to most of them. At the same time, Irey was experimenting with genes that produce antimicrobial proteins in spinach plants, so-called defensins. These proteins, which defend their hosts from threats, were able to stunt the huanglongbing bacteria in laboratory experiments by perforating its sheath.

The scientists then combined the genetic material and the virus. It was ready for use.

Trees transport carbohydrates through phloem, a tissue that is in the innermost layer of bark. To infect the trees with the designer virus, Irey’s team scored the bark of each individual tree in the greenhouse and inserted plant matter that had been treated with the virus. The virus then spread through the phloem and found its way into the cells of the trees, from the roots all the way to the leaves. The cells were able to read the information delivered by the spinach gene and construct the defensin, which then went after the huanglongbing bacteria in the phloem. The tree was essentially producing its own medicine, without its own genes having been manipulated.

The company hasn’t yet published any of its results. Michael Irey says the virus doesn’t kill all the bacteria, but the experiments have been promising thus far. As a result, Southern Gardens Citrus has applied to the USDA for permission to deploy the designer virus to a combined area three times the size of the Alps’ Lake Constance. Approval could arrive by the end of this year, which would make it the largest field study of genetically modified plant viruses ever. 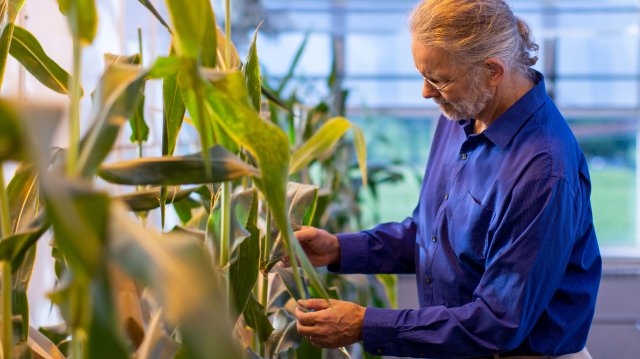 Michael Irey considers designer viruses to be ecologically unproblematic, even going so far as to say it helps protect the environment by reducing the amount of pesticides used against carriers of huanglongbing. He believes the risk of the designer virus spreading to other plants is virtually nil. According to studies, it neither finds its way into seeds nor do aphids, the only known carriers, pick it up. As proof, Irey planted at least one row of non-infected orange trees in each experimental orchard, a total of 8,814 trees. “We have yet not had a single incidence of (the virus) spreading in nine years,” he says.

Evolutionary biologist Guy Reeves from the Max Planck Institute has been following the research with genetically engineered viruses for several years. He isn’t the kind of person who rashly call for bans, preferring to carefully weigh possible benefits. His verdict: Of course there are dangers, such as the possibility that the virus clone from the laboratory could mutate or interact with a virus in nature and suddenly become transferable by insects. “However, under strict supervision, the risk may be manageable,” Reeves says. Still, he is concerned. “A license would set an unfortunate precedent for future technologies, particularly if they involve increasing tolerance to risk.”

On a recent day in September, the botanist Georg Jander, 54, is standing in the basement of a nondescript gray building in the state of New York, a windowless room lit only by a few neon lights. Fifteen corn plants are on a wheeled cart, each covered with a plastic bag. A handful of aphids crawl around on each plant. “We want to see how quickly the insects infect the corn with pathogens,” Jander says.

A professor at Cornell University and a researcher with the Boyce Thompson Institute, Jander has set himself a controversial goal. Indeed, he will soon have to move his aphids into a greenhouse with elevated security provisions, including a vestibule entry system. There, he wants to get the aphids to transmit genetically engineered viruses.

Georg Jander’s research is being funded by the Insect Allies program. Around a dozen universities are involved and DARPA has provided $27 million to the project. The scientists are hoping to reach their goal by 2021: swarms of insects transmitting designer viruses from plant to plant without humans having to do much of anything at all. Six-legged biotech soldiers.

DARPA says its main focus is food security in the U.S. and that the country must be prepared for introduced pests and extreme weather. There are, of course, already corn varieties that can withstand extended periods of low precipitation, but yields tend to be low. “The insects, though,” Jander says, “deliver the drought gene only when it is needed. It ensures, for example, that the corn plants close their pores on the leaf surface to reduce water loss.”

In contrast to the citrus researchers in Florida, Jander and his team are also working on viruses that can alter the genes of plants with a built-in editor known as CRISPR. That could have unintentional consequences if the viruses, contrary to Jander’s aim, manipulate the plants in such a way that they create genetically modified seeds. They could also theoretically jump to other species of plant. All of which raises the question as to whether such a powerful genetic tool should be put into the hands of an aphid.

The DARPA program includes a variety of security measures designed to prevent the spread of the viruses. They are not allowed to be transmissible. “We will also manipulate the aphids such that they will be unable to reproduce,” Jander says. Just a few days after they deploy, they will die — along with their dangerous cargo. The scientists refer to it as a “kill switch.”

But Reeves, the evolutionary biologist, says the measures only provide the illusion of safety. The priority, he says, should be on controlling the spread of the virus, not the insects. “If I’m shipping uranium by post, nobody would be reassured by how thick the paper envelopes were,” he says.

Blake Bextine, head of the Insect Allies program, says that releasing the insects into the environment is not foreseen “at this time.” But that isn’t enough to satisfy Reeves. In an article in the magazine Science, he and four co-authors warn that the technology, even in a primitive form, can be used nefariously as a biological weapon, with insects deployed to attack fields of corn, rice, wheat or cassava. “It is easier to destroy the genome of a plant with a pair of molecular scissors than to improve it,” Reeves says. “It is unclear whether the scientists at Insect Allies will ever be able to fulfill their promises. The risks that they are accepting, by contrast, are disproportionately high.”

Ultimately, a more fundamental issue is at stake: How forcibly should humans interfere in nature’s genetic code? How strongly should we alter plants and animals to suit our needs? Sometimes, it becomes quite easy to answer such difficult questions; sometimes the ethicists become pragmatists. In cases of an approaching catastrophe.

In 2014, a carrier of the disease was discovered for the first time on mainland Portugal and Spain, a winged insect named Trioza erytreae. Thus far, the presence of the bacterial pathogen sometimes carried by the insect has not been documented in Europe. But in a world in which 10 million people board aircraft every day and around 2 million containers are shipped out, its arrival seems inevitable. Indeed, the question is not if Europe’s orange orchards will become infected by huanglongbing. The question is when.