The Destruction of the Amazon, Explained 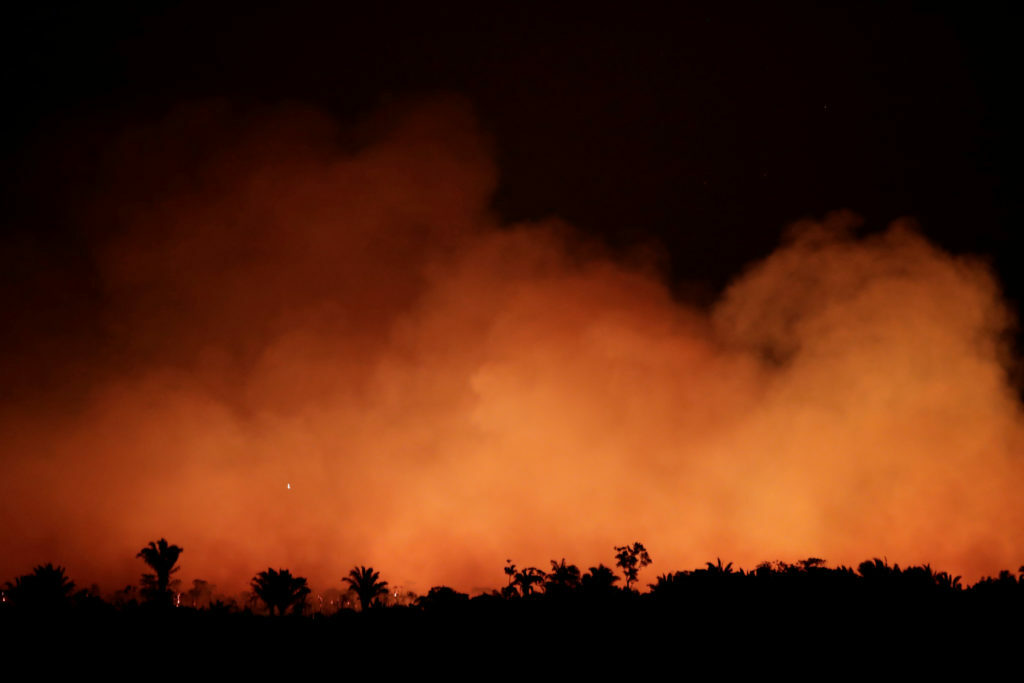 Smoke billows during a fire in an area of the Amazon rainforest near Humaita, Amazonas State, Brazil, Brazil August 17, 2019. REUTERS/Ueslei Marcelino

1 Sep 2019 –The “lungs of the earth” are on fire, and shrinking every day. What are the consequences for the planet? Here’s everything you need to know:

Tens of thousands of fires are burning across the vast Amazon basin, consuming 4.6 million acres of irreplaceable rain forest since the beginning of the year. Thick, black smoke, visible from space, wafts over the land, plunging Brazil’s largest city, São Paulo, into daytime darkness and filling hospitals with patients in respiratory distress. More than 36,000 of the 77,000 fires in the Amazon this year began in the last month alone. The Brazilian space agency, which monitors the blazes by satellite, says most of the damage is in the northwestern Brazilian states of Roraima, Acre, Rondônia, and Amazonas, where more than double the usual amount of acreage is on fire. This is not natural: More than 90 percent of these fires have been set by loggers and ranchers seeking to clear land. With the encouragement of the Brazilian government, deforestation of the Amazon has surged to the highest level in a decade and is now galloping along at three football fields every minute. Half of the clear-cutting and burning has occurred in protected lands.

Why is the Amazon so important?

Home to three million species of plants and animals, the vast rain forest is the most biodiverse region on the planet. Some 400 billion trees absorb millions of tons of carbon dioxide every year — crucial to slowing climate change — and emit about 6 percent of Earth’s oxygen. These trees also respire moisture, pulling fresh water from the ground and cycling it into the air, creating one of the atmospheric “rivers” of moisture that regulate rainfall across the planet. Rainfall in the American Midwest, for example, heavily depends upon water coming from the Amazon. Over the past half century, though, one-fifth of the rain forest — 300,000 square miles, an area larger than Texas — has been deforested. Scientists say if another 10 percent is lost, the ecosystem will reach a tipping point at which it will dry up irreversibly, converting the entire remaining rain forest into a savannah. The consequences for the planet could be devastating. 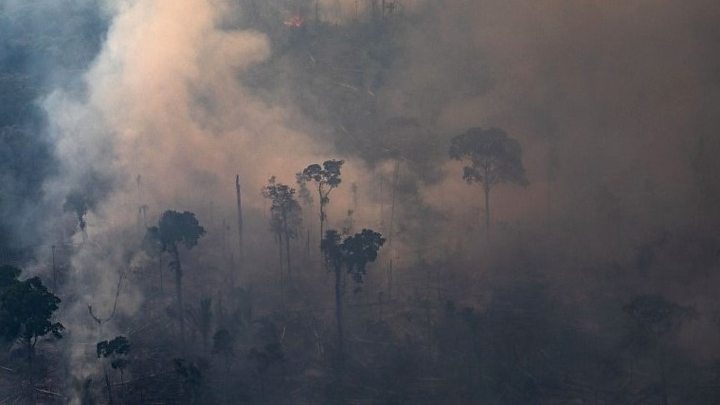 Why has it gotten so bad?

Brazil’s President Jair Bolsonaro, a far-right, pro-business former army captain, took office in January with a pledge to open the rain forest to development. “Not one centimeter” more, he vowed, would be set aside for the 1 million indigenous Brazilians who have lived in the rain forest for millennia. Bolsonaro packed his cabinet with climate-change deniers and agribusiness executives and transferred responsibility for indigenous territories from the Justice Ministry — which protected the rights of Amazon forest tribes — to the Agriculture Ministry, which promotes farming and ranching. One Brazilian lawmaker described the shift as “letting the fox take over the chicken coop.” Bolsonaro also slashed staff and funding for IBAMA, the agency responsible for enforcing environmental laws, firing 21 of its 27 state heads. Since he took office, the number of fires in the rain forest has risen by 84 percent.

Why is he doing this?

With Brazil’s economy struggling, Bolsonaro sees the Amazon as the country’s greatest exploitable resource, and he believes that environmentalists are a front for foreign “colonialists” who want to control Brazil. Last week he claimed that the fires were set by nongovernmental organizations trying to make his government look bad. Bolsonaro wants to boost the beef and soy industries — soy is the country’s biggest export, at $26 billion a year — and reclaiming land from the Amazon is the quickest way. Cleared of its lush vegetation, though, Amazon soil is nutrient-poor and quickly depleted, so cattlemen and farmers have to move on, claiming even more forestland, after just a few growing seasons.

What is the international community doing?

French President Emmanuel Macron, who has called the Amazon fires an “international crisis,” put the issue at the top of this week’s G-7 summit. Macron also said he would seek to pull the EU out of Mercosur, a massive trade deal 20 years in the making that is being finalized with Brazil and other Latin American countries. The deal was contingent on Brazil doing more to protect the rain forest, but now, said a spokesperson for Macron, “The president can only conclude President Bolsonaro lied to him.” A nationalist, Bolsonaro has favored economic protectionism and has also rejected international aid to fight the Amazon’s fires, saying countries “send it with the aim of interfering with our sovereignty.” With criticism mounting, he has sent in the army to help extinguish the blazes.

What else can be done?

If the fires burn out or can be put out, there is plenty that Brazilians can do to mitigate the damage. Indigenous leaders have proposed ways to open their lands to economic development without cutting down trees. They want to exploit the Amazon’s biodiversity for medical research and ecotourism. And they hope to partner with agribusiness to expand sustainable food crops like acai, Brazil nuts, and fruit. None of that will happen, though, as long as Bolsonaro is in office — and his first term doesn’t end until 2023. By then, if the current rate of deforestation doesn’t slow, the forest will be close to its tipping point.

A million indigenous people call the Amazon forest home, but Bolsonaro thinks their communities are a waste of valuable land. On his second day in office, he tweeted that Indians aren’t part of “the real Brazil,” saying, “We’re going to integrate these citizens and give them value as real Brazilians.” That means forcing tribes off their ancestral lands, where they have been stewards of the forests, and into cities. It’s the same assimilation policy that was pursued by the 1964–1985 military dictatorship that Bolsonaro openly admires, a junta that killed more than 8,300 indigenous people while pursuing Amazon development. Already, he has reversed a decades-long ban on mining in indigenous territory and halted the enforcement of logging bans. “With Bolsonaro, the invasions are worse and will continue to get worse,” Francisco Umanari, an Apurinã chief, told The Intercept. “It’s become a question of life and death.”