When Pyromaniacs Lead, the World Burns

As global crises are pushing the world towards disaster, the G7 could not even agree on a final communiqué. 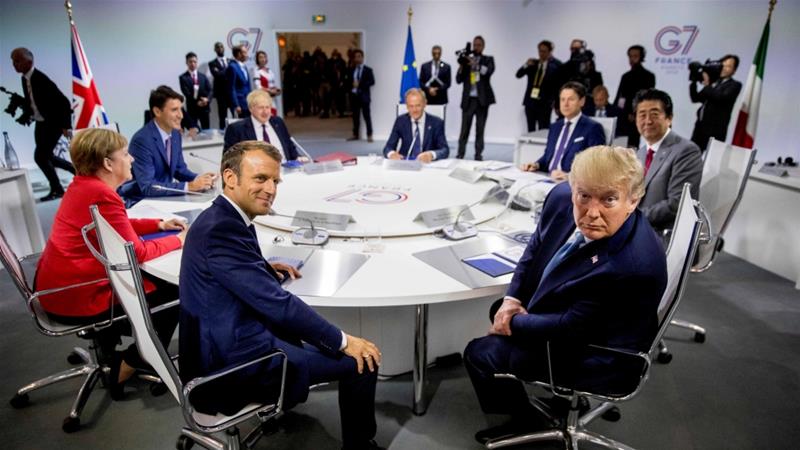 French President Macron and US President Trump at a G-7 working session in Biarritz, France, on August 25, 2019.  [Reuters/Andrew Harnik]

27 Aug 2019 – Watching the fires ravaging the Amazon rainforest ahead of the G7 summit, I cannot help but think that Mother Earth is trying to tell them something: to warn them of all the grave things to come if they continue to avoid collective action on the big challenges facing the globe, including climate change.

Certainly not the firecracker Brazilian president, Jair Bolsonaro. He first dismissed concerns about the gravity of the situation then went on, rather disingenuously, to accuse NGOs of starting the fires, while his supporters condemned the Western outcry as imperialist interference in sovereign Brazilian affairs. He even rejected the G7’s – albeit modest – pledge of $20m in aid to help put out the wildfires.

But Mother Earth is not addressing Brazil per se. Its message is to the world and it is loud and clear: Stop abusing nature and start living in harmony.

Fire may have always been part of life; something has always burned somewhere on Earth. And yes, climate activists may have “cried wolf” all too often, but recent fires in Europe, Asia, Africa, North and South America aren’t just “natural” – these are also man-made, brought about by political and economic irresponsibility.

Despite their concern for the Amazon forest, leaders of the richest liberal democracies are by far not doing enough to address global warming.

This is made even worse as the richest of the rich liberal democracies, the United States, walked away from the rather mild Paris Agreement on climate change action. At this G7, President Donald Trump made it a point to skip the climate change session. The US, China and India produce about half of global carbon emissions.

But the failure to tackle climate change is a symptom of a greater problem in world affairs. Apart from the Paris Agreement, the Trump administration has also pulled out of nuclear, trade and other international accords and institutions, setting new precedents and a bad example for other countries itching to abandon their commitments to international rules and norms.

Conflict, like fire, has been with us since the dawn of human civilisation. And new conflicts, like new wildfires, are caused by a “fire triangle”.

For wildfires, that is fuel (dry trees, etc), heat and dry wind. For new conflicts, that is inequality (in standard of living, human rights, etc), tribalism (populist nationalism, sectarianism, etc) and globalisation.

In her 2003 book, World on Fire, Amy Chua explains how exporting free market democracy breeds ethnic hatred and global instability. She argues that globalisation, contrary to post-Cold-War conventional wisdom, has been a disruptive and destabilising force around the world.

What Chua missed in her book is the degree to which globalisation has generated instability within liberal democracies as well, leading to new societal fissures and the rise of a new populist right. As French President Emmanuel Macron said at a press conference ahead of the G7 meeting, “We are living through a very deep crisis of democracy”.

Needless to say, globalisation has not invented tribalism or inequality. In fact, it has helped elevate countless people out of poverty and connected the world like never before.

But globalisation has highlighted inequality more starkly than ever before, locally and internationally. During this G7, leaders made inter- and intra-state inequality a priority on its summit agenda, but alas, they failed to agree or commit to real strategies to end it.

Likewise, hyper-sectarianism and populist nationalism have preceded modern globalisation by far, but the latter has galvanised and accentuated new local and international identities.

Internal tensions within the G7 over US foreign policy, Russia and global security, and over China and trade have undermined any collective action on regional conflicts, poverty, and of course, climate change.

In other words, despite the diplomatic spin over the weekend, there has been no agreement on the main challenges facing the globe. Even the commendable French attempt at mediation between the US and Iran may prove to be no more than an exercise in crisis management that falls short of bringing about a lasting solution.

Indeed, these presumably like-minded liberal democracies remain deeply divided and even lack a “common language” to address global challenges. They couldn’t even agree on a final communique at the G7.

They only agreed to disagree.

The world is still not worse off than it was, say, during the 2003 Gulf war, let alone during major 20th-century wars. But make no mistake, the economic and strategic conditions for conflict are stacking up, as they did before each of these horrific events.

With the G7 and international institutions paralysed, the leading world powers – China, Russia and the US – are seemingly embracing the foolish notion that “it’s best to fight fire with fire” in their reckless competition for power. If they persist unchallenged, they’re bound to set the world on fire.