Forecast suggests rainforest could stop producing enough rain to sustain itself by 2021. 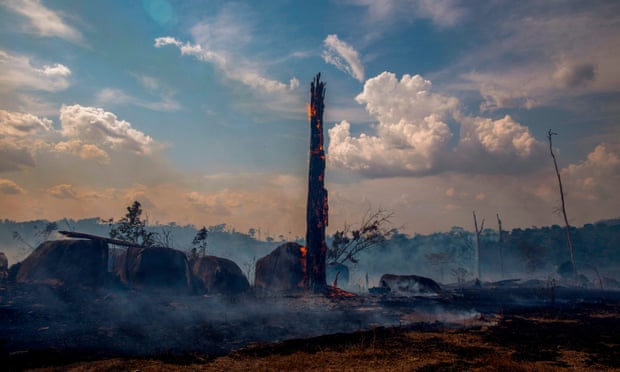 The forecast suggests the rainforest will degrade into a drier savannah, releasing billions of tonnes of carbon into the atmosphere. Photograph: João Laet/AFP/Getty

23 Oct 2019 – Soaring deforestation coupled with the destructive policies of Brazil’s far-right president, Jair Bolsonaro, could push the Amazon rainforest dangerously to an irreversible “tipping point” within two years, a prominent economist has said.

After this point the rainforest would stop producing enough rain to sustain itself and start slowly degrading into a drier savannah, releasing billions of tonnes of carbon into the atmosphere, which would exacerbate global heating and disrupt weather across South America.

The warning came in a policy brief published this week by Monica de Bolle, a senior fellow at the Peterson Institute for International Economics in Washington DC.

The report sparked controversy among climate scientists. Some believe the tipping point is still 15 to 20 years away, while others say the warning accurately reflects the danger that Bolsonaro and global heating pose to the Amazon’s survival.

“It’s a stock, so like any stock you run it down, run it down – then suddenly you don’t have any more of it,” said de Bolle, whose brief also recommended solutions to the current crisis.

Bolsonaro has vowed to develop the Amazon, and his government plans to allow mining on protected indigenous reserves. Amazon farmers support his attacks on environmental protection agencies. His business-friendly environment minister, Ricardo Salles, has met loggers and wildcat miners, while deforestation and Amazon fires have soared since he assumed office in January.

The policy brief noted that Brazil’s space research institute, INPE, reported that deforestation in August was 222% higher than in August 2018. Maintaining the current rate of increase INPE reported between January and August this year would bring the Amazon “dangerously close to the estimated tipping point as soon as 2021 … beyond which the rainforest can no longer generate enough rain to sustain itself”, de Bolle wrote.

De Bolle is also head of the Latin American studies programme at Johns Hopkins University and last month addressed a US Congress committee on preserving the Amazon. She called her prediction a “provocation”.

“If Bolsonaro is serious about developing the Amazon without paying any attention to sustainability or maintaining the forest’s standing, these rates would happen within his mandate,” she said.

Carlos Nobre, one of Brazil’s leading climate scientists and a senior researcher at the University of São Paulo’s Institute for Advanced Studies, questioned her calculation that estimated deforestation would quadruple from an estimate of nearly 18,000 km2 this year to nearly 70,000 km2 by 2021.

“It seems very improbable to me – the projected deforestation increase is more an economic calculation than ecological,” he said. However, he added: “We are seeing an increase in deforestation, I am not questioning this.”

Last year, Nobre argued in an article written with celebrated American conservation biologist Thomas Lovejoy that the Amazon tipping point could happen in eastern, southern and central Amazonia when 20% to 25% of the rainforest has been felled – not expected for 20 to 25 years. He has since brought forward his prediction by about five years.

But Lovejoy, a professor at George Mason University in Fairfax, Virginia, said that de Bolle’s projection could come true because global heating, soaring deforestation and an increase in Amazon fires have created a “negative synergy” that is accelerating its destruction – citing droughts in recent years as a warning sign.

“We are seeing the first flickering of that tipping,” he said. “It’s sort of like a seal trying to balance a rubber ball on its nose … the only sensible thing to do is to do some reforestation and build back that margin of safety.”

Among other commitments under the Paris climate deal, signed by leftist former president Dilma Rousseff, Brazil agreed to reforest 12m hectares and end illegal deforestation by 2030.

Mongabay reported last month that Brazil looks increasingly unlikely to meet its Paris targets. Deforestation began rising under Rousseff in 2013 after nine years of decline and has accelerated under Bolsonaro.

Claudio Angelo of the Climate Observatory – an umbrella of non-profit environmental groups – said he thought de Bolle’s calculations were too pessimistic, but praised her brief’s other recommendations.

These included expanding the Amazon fund, which finances sustainable rainforest projects to include the United States and other countries so that Brazil is not expected to fund rainforest protection virtually on its own. The Amazon Fund is currently financed by Norway and Germany, but both countries suspended payments in August.

De Bolle said Brazil should revive a resolution that made rural credit financed by public banks dependent on lenders proving that they complied with environmental and other laws. “That’s a big stick,” she said.

Angelo said “the points [de Bolle] made are quite real”. “For all the madness, Bolsonaro did manage to make people talk about the Amazon,” he said.