Death, Misery and Bloodshed in Yemen 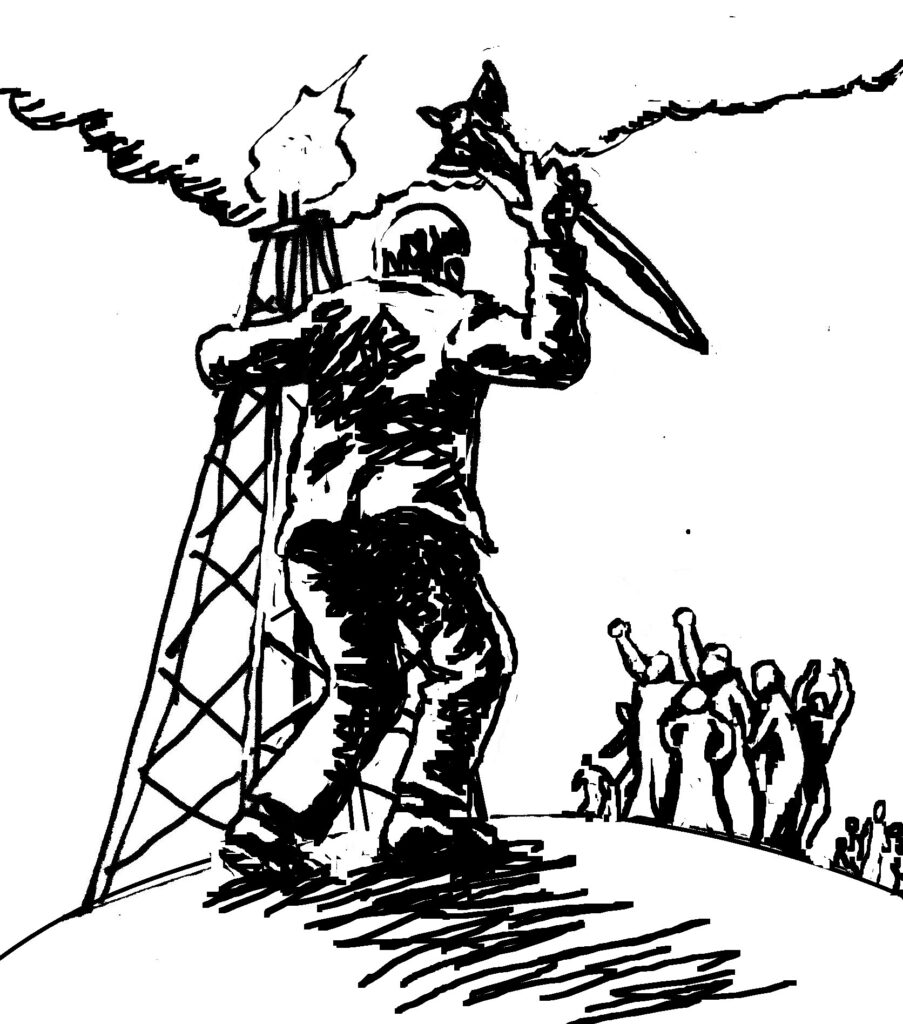 16 Oct 2019 – Writing about his visit to the world’s largest weapons bazaar, held in London during October, Arron Merat describes reading this slogan emblazoned above Raytheon’s stall: “Strike with Creativity.” Raytheon manufactures Paveway laser-guided bombs, fragments of which have been found in the wreckage of schools, hospitals, and markets across Yemen. How can a weapons manufacturer that causes such death, bloodshed, and misery lay claim to creativity?

Greta Thunberg, sitting alone outside her school as she initiated a movement of climate strikes, could properly invoke the words “Strike with Creativity.” She inspired Friday classroom walkouts, worldwide, by young people protesting destruction and death caused by climate catastrophe. Her admirable goal is to save the planet by promoting such strikes.

Consider the Raytheon weapons now demolishing Yemen. Fragments of Raytheon and other U.S. manufactured weapons dot blast sites where Yemeni survivors struggle to collect body parts and scattered bits of clothing, which are needed to compile lists of the dead.

In September, the Kingdom of Saudi Arabia (KSA) hit a detention center in the Dhamar governorate, in the northern highlands of Yemen with seven airstrikes that killed at least 100 people and “pulverized” the area, according to Bethan McKernan, reporting for The Guardian. “It took five days to remove all the bodies impaled on metalwork ripped from the walls in the blasts,” she wrote.

After the attack, McKernan interviewed Adel, a 22-year-old security guard  employed at the site. His brother, Ahmed, also a guard, was among those killed. Adel pointed to a blanket, visible on the second floor of a building where the guards had slept. “You can see Ahmed’s blue blanket up there,” said Adel. “There were 200 people here but now it’s just ghosts.”

Saudi Arabia and other countries in the Saudi-led coalition bombarding and blockading Yemen have killed tens of thousands, wrecking the country’s already enfeebled infrastructure and bringing Yemen to the brink of a famine that may kill millions. President Trump signaled additional support for Saudi Arabia on October 11 when the U.S. military announced it would send thousands more troops to the kingdom, bringing the number of U.S. troops there to 14,000.

Just as Greta Thunberg insists adults must become intensely aware of details and possible solutions regarding the climate catastrophe, people in the U.S. should learn about ways to end economic as well as military war waged against Yemen. For us to understand why Yemenis would link together in the loose coalition of fighters called Huthis requires deepening awareness of how financial institutions, in attempting to gain control of valuable resources, have pushed farmers and villagers across Yemen into debt and desperation. Isa Blumi writes about this sordid history in his 2018 book, Destroying Yemen, What Chaos in Arabia Tells Us about the World.

Blumi details how Yemen’s society, largely independent and agrarian, became a guinea pig for International Monetary Fund (IMF) “development projects” which, based on strikingly colonialist theories of  modernization, crushed grassroots institutions and amounted to “cost-effective ways of prying Yemen’s wealth out of its peoples’ hands.” 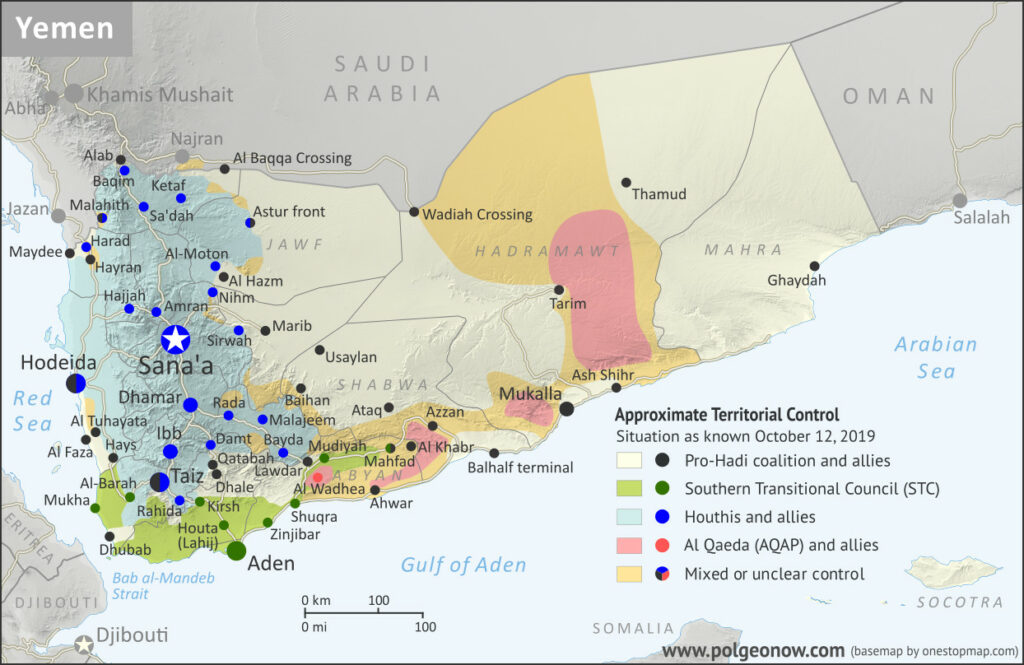 Local Development Associations, for example, were formed during the 1970s to help people hang on to their land, cooperatively determine what crops they would grow and decide how they would use the profits. But U.S. Agency for International Development “experts” pressured these groups to instead produce “cash crops strictly meant for export.”

“After all,” Blumi writes, “with the right kind of cash crop and the use of American labor-saving technology, pesticides and fertilizers included, Yemen’s villagers were no longer needed in the fields. Alternatively, they could work in cities in sweatshops producing clothes for a global market or the soon booming oil and gas projects.”

Blumi’s book documents the fiercely stubborn creativity with which, decade by decade, Yemenis kept surprising the West, exploring and pursuing countermeasures to resist its exploitative control, and risking the West’s destructive anger.

Yemenis resisted U.N. and IMF prescriptions of global integration and debt peonage. When farmers desperate for cash went to work in, for instance, Saudi Arabia, “they consistently sent remittances home to families that saved the cash and invested in local projects, using local bank transfers.” Imams and village leaders encouraged people to resist imperialist “modernization” projects, knowing that the West’s preferred “modern” role for them was as wage slaves with no hope of developing a better future.

The “Huthi” movement began when Husayn al-Huthi, an opponent of Yemen’s dictatorial (and Western-allied) Saleh regime, tried to defend the water and land rights of locals in the Sa’adah province in northwestern Yemen. Sharing what was then a porous and informal border with the KSA, they often found themselves in disputes with Saudi border patrols. They also resisted ‘structural adjustment’ demands by the IMF to privatize some of Yemen’s best farming and grazing land. When the dictator Saleh made criminal concessions to the KSA, al-Huthi and his followers persisted with protests. Each new confrontation won over thousands of people, eventually spreading beyond Sa’adah.

In 2008, an extremely wealthy member of the bin Laden family aimed to build a bridge across the mouth of the Red Sea from Yemen to Djibouti. The project could generate hundreds of billions for investors, and quicken the process of exploitative modernization; but it would also require building railways and roads where there are only villages now. People living along the coastline of the Red Sea would be in the way.

Since 2015, fighting has been concentrated in this area, called the Tihama. Control of the coastline would also allow financial takeover of potentially profitable Yemeni fisheries. Blumi says billions of dollars of annual income are at stake, noting with irony that a war causing starvation is being waged, in part, to gain control over food assets.

A recent United Nations report says that Yemen is now “on course to become the world’s poorest country” with 79 percent of the population living under the poverty line and 65 percent classified as “extremely poor.” The Yemen Data Project estimated 600 civilian structures have been destroyed, monthly, in Yemen, mostly by airstrikes.

“Staple food items are now on average 150 per cent higher than before the crisis escalated,” says a 2019 report by the Norwegian Refugee Council. “Teachers, health workers and civil servants in the northern parts of the country haven’t been paid in years,” according to the same report.

Mainstream media reports could convince concerned onlookers that Yemenis have been particularly vulnerable to violence and war because they are socially and economically backward, having failed to modernize. Blumi insists we recognize the guilt of financial elites from multiple countries within and beyond the Gulf states as well as institutions within the World Bank, the IMF and the UN. It’s wrong to blame “eighty percent of a country’s population currently being starved to death”

Greta Thunberg continues calling us to join her on an unfamiliar, unprecedented, and arduous path to change course as our world careens toward terrifying devastation. We’re offered a chance to resist destructive, albeit “modern” means of exploiting the planet’s resources. A true strike for creativity, necessarily challenging militarism and greed, will help prevent the hellish work of destroying Yemen.

A version of this article appeared in The Progressive Magazine

Anticopyright: Editorials and articles originated on TMS may be freely reprinted, disseminated, translated and used as background material, provided an acknowledgement and link to the source, TMS: Death, Misery and Bloodshed in Yemen, is included. Thank you.