UN Official’s Briefing on Torture of Assange Boycotted by Media 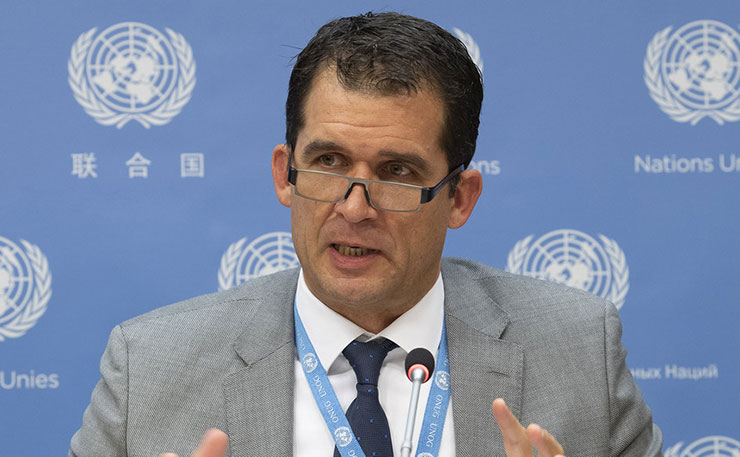 18 Oct 2019 – In a press briefing at the United Nations headquarters in New York on October 15, UN Special Rapporteur on Torture Nils Melzer restated his assessment that WikiLeaks’ publisher Julian Assange has been subjected to an unprecedented campaign of persecution that amounts to “torture.”

The UN finding, first issued in May, and updated by Melzer at the briefing, should have provoked banner headlines in the major newspapers in the US, Britain and internationally.

Melzer’s warnings carry the weight and authority of a UN official and an internationally-respected legal expert. They concern Assange, the world’s most famous persecuted journalist, who has done more than any publisher to expose the brutal realities of imperialist war, diplomatic intrigue and pervasive CIA surveillance.

As it was, footage aired by the Russian-funded RT outlet showed a grand total of four people in the audience, surrounded by rows of empty chairs. To date, the RT article, and an accompanying video, appears to be the only report on the briefing by any media outlet in the world.

If Melzer had been condemning the persecution of journalists in Iran, Russia, China, or another country in the crosshairs of US imperialism, he would have been surrounded by dozens of reporters from the New York Times, the Washington Post, the Guardian and other conduits for the intelligence agencies. They doubtless would have published stories, warning in sombre tones of an assault on the media and insisting on the necessity to defend press freedom.

Because Assange is being targeted by the US government and its allies, including Britain and Australia, for his role in revealing American war crimes, the establishment media simply did not show up.

The press boycott is all the more striking given that even corporate publications have acknowledged that if Assange is extradited from Britain to the US, it will establish a precedent for journalists anywhere in the world to be hauled before US courts for the “crime” of publishing true and newsworthy information that the American government sought to conceal.

The New York Times and the Washington Post, moreover, have noted that the 17 Espionage Act charges that have been levelled against Assange by the Trump administration pose a direct threat to the US Constitution’s press freedom protections, and could be used against other publications in the future—including their own.

The silence on Melzer’s remarks can therefore only be understood as a political decision, aimed at suppressing any public discussion on Assange’s persecution, in the lead-up to court hearings next February that will rule on his extradition from Britain to the US.

Melzer explained that when he visited Assange in May he was accompanied by two medical experts. “We came to the conclusion that he had been exposed to psychological torture for a prolonged period of time,” the UN rapporteur stated. “That’s a medical assessment.”

Speaking of his recommendations, addressed to the US, British, Swedish and Australian governments, Melzer said: “We asked for involved states to investigate this case and to alleviate the pressure that is being placed on him and especially to respect his due process rights, which in my view have been systematically violated in all these jurisdictions.”

Melzer stated: “Unfortunately none of those states agreed to conduct an investigation, although that is their obligation under the convention on torture.”

In official letters to those governments in May and June, Melzer had meticulously documented the way in which each of them had trampled upon Assange’s democratic and legal rights.

The UN official reviewed the way in which bogus allegations of sexual misconduct were seized upon by the Swedish authorities to blacken Assange’s name and to create a pretext for his prolonged detention in Britain.

In his letter to the Swedish government, Melzer wrote: “For almost nine years, the Swedish authorities have consistently maintained, revived and fuelled the ‘rape’-suspect narrative against Mr. Assange, despite the legal requirement of anonymity, despite the mandatory presumption of innocence, despite the objectively unrealistic prospect of a conviction, and despite contradicting evidence suggesting that, in reality, the complainants never intended to report a sexual offence…”

The rapporteur has condemned the British state for pursuing Assange relentlessly on the fraudulent pretext of a minor bail offense. Melzer has noted that since Assange’s illegal arrest by British police on April 11, the UK judiciary has denied his right to due process, as it prepares to hand the WikiLeaks’ founder over to his persecutors in the US.

Most recently, British judges have decreed that Assange will remain behind bars indefinitely, despite his custodial sentence on the bail offenses having expired on September 22. In other words, he is explicitly being held as a political prisoner at the behest of the Trump administration.

The ruling followed a warning from Assange’s father John Shipton that he fears his son may die in prison. Despite the deterioration of his medical condition, Assange has been held in conditions of virtual solitary confinement in the maximum-security Belmarsh Prison, without access to computers and legal documents necessary for preparing his defence.

Melzer has also warned that Assange has no prospect of a fair trial in the United States, under conditions in which senior US politicians have called for his assassination for exposing American war crimes and global diplomatic conspiracies. He has denounced the Australian government for failing to defend Assange, despite the fact that he is an Australian journalist and citizen.

All of the governments involved responded to Melzer with evasive letters, blithely dismissing his charges and asserting that their pursuit of the Assange was entirely lawful. The response underscores the extent to which the protracted persecution of the WikiLeaks’ founder has involved the trampling on international norms and institutions.

The media censorship of Melzer’s press briefing further demonstrates that the corporate publications are complicit partners in the attacks against Assange. For years, they have trumpeted every slander against him that has been concocted by the US government, its allies and the intelligence agencies.

In his report last May, Melzer noted that the corporate media bears its own share of responsibility for the torture inflicted on Assange, having enthusiastically participated in what the UN Special Rapporteur on Torture aptly described as “public mobbing.”