Amazon Rainforest Sees Biggest Spike in Deforestation in Over a Decade 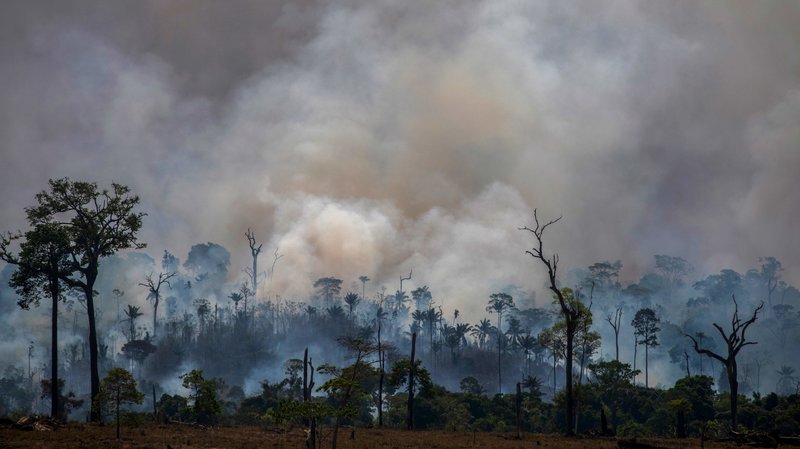 Smoke rises from the fires ravaging the Amazon basin in August. On Monday, Brazilian authorities released data revealing the highest rate of deforestation in the Amazon rainforest in a decade — partly due to a recent surge in wildfires throughout the region. Joao Laet/AFP via Getty Images

18 Nov 2019 – Picture, for a second, just how vast New York City is. All told, including Staten Island, the Bronx and every block in between, the massive metropolis takes up more than 300 square miles. Now, try to picture a hunk of land more than 12 times that size.

That’s about how much of the Amazon rainforest was destroyed in just the span of a year, according to Brazilian authorities.

The country’s National Institute for Space Research, or INPE, released data Monday revealing that 3,769 square miles of rainforest were lost to deforestation in a 12-month period ending in July. That marks the highest rate of deforestation since 2008 — and a nearly 30% spike over the rate recorded by INPE during the previous yearlong span. 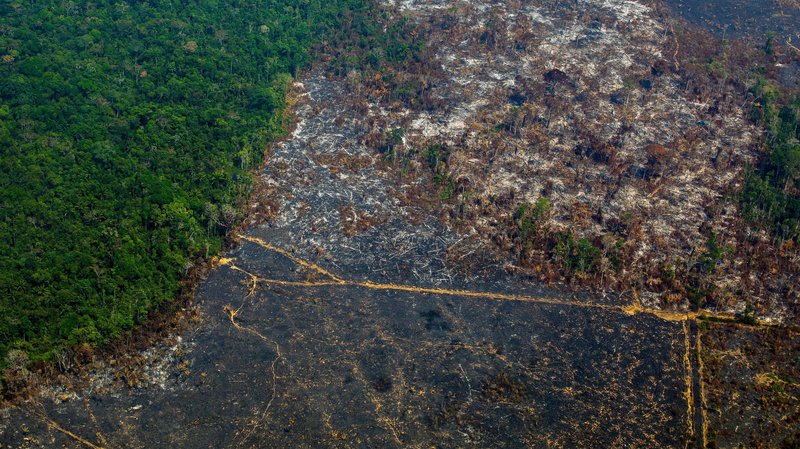 An aerial view of the Cachimbo Biological Reserve in Altamira, Brazil, reveals the scale of the burned land in the Amazon basin, back in August. Critics of Brazilian President Jair Bolsonaro trace the recent spike in fires to his administration’s lax environmental policies. João Laet/AFP via Getty Images

At a news briefing Monday, Brazil’s environmental minister, Ricardo Salles, vouched for the accuracy of the stark numbers and said authorities are considering new ways to combat the illegal logging and mining operations that he blamed for the rising tide of destruction.

Those comments are unlikely to inspire confidence among critics of Salles or his boss, Brazilian President Jair Bolsonaro, who has not yet commented publicly on the new set of numbers.

Since the right-wing politician took office at the start of this year, his administration has slashed budgets and sidelined staff at the environmental regulatory agencies responsible for targeting illegal logging and ranching in the rainforest. Bolsonaro has labeled these regulations impediments to Brazil’s economic growth.

But critics have pilloried these policies as a principal cause of the soaring deforestation rates recently. That criticism only grew louder over the summer, when a series of major fires ravaged large swaths of the Amazon and attracted international concern. By late August, researchers had already seen an 80% leap over last year in the number of wildfires that had erupted across the country.

Bolsonaro, a climate skeptic, has repeatedly cast doubt on the numbers put forth by the INPE, and earlier this year he fired the agency’s director, Ricardo Magnus Osório Galvão. The erstwhile agency leader told local media he was dismissed for questioning how the Brazilian president was using INPE’s data.

Disputes over the government’s environmental policies have also erupted between Bolsonaro and other world leaders, some of whom — including French President Emmanuel Macron — offered Brazil at least $22 million to help fight the wildfires. Bolsonaro angrily rebuffed that offer, demanding a personal apology from Macron as the condition for him even considering it. 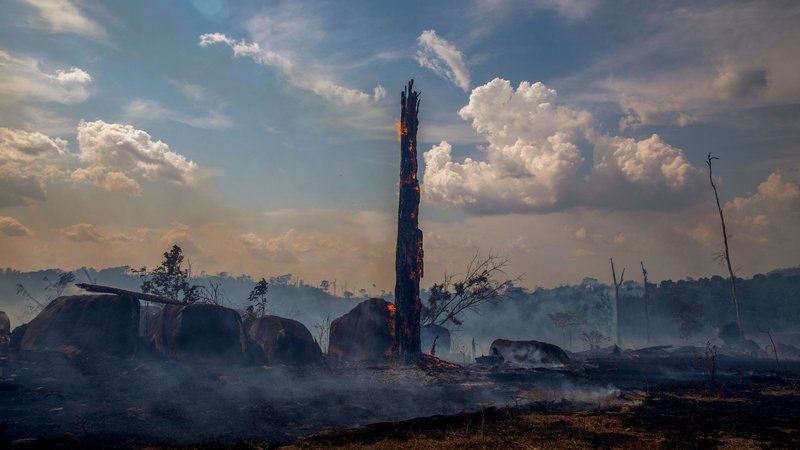 A burned trunk stands amid the devastation left after wildfires tore through parts of Brazil’s Amazon rainforest earlier this year. During the yearlong period ending in July, deforestation claimed a span of the Amazon 12 times the size of New York City. João Laet/AFP via Getty Images

“President Bolsonaro’s anti-environmental agenda favours those who practice environmental crimes, and encourages violence against forest people,” Cristiane Mazzetti of Greenpeace said in a statement released Monday. “His administration is trashing practically all the work that has been done in recent decades to protect the environment and end deforestation.”

Brazil’s Climate Observatory, a network of environmental advocacy organizations including Greenpeace, said the data INPE released Monday don’t just represent the highest rate of deforestation in Brazil in 11 years; the network says these numbers also mark the third-highest ever on record.

“The question that remains,” said Carlos Rittl, the Climate Observatory’s executive secretary, “is how long Brazil’s trading partners will trust the promises of sustainability and compliance with the Paris Agreement, as forests fall, indigenous leaders are killed and environmental laws are shattered.”

At his briefing Monday, Salles, the environmental minister, pledged to seek solutions at an upcoming meeting with leaders of local governments.

Colin Dwyer covers breaking news for NPR. He reports on a wide array of subjects — from politics in Latin America and the Middle East, to the latest developments in sports and scientific research.