14 Nov 2019 – The Marshall Islands say that plutonium is leaking into the Pacific Ocean from the concrete dome the U.S. built to dispose of its nuclear waste.  (Also see information below on Johnston Island plutonium contamination, etc.) 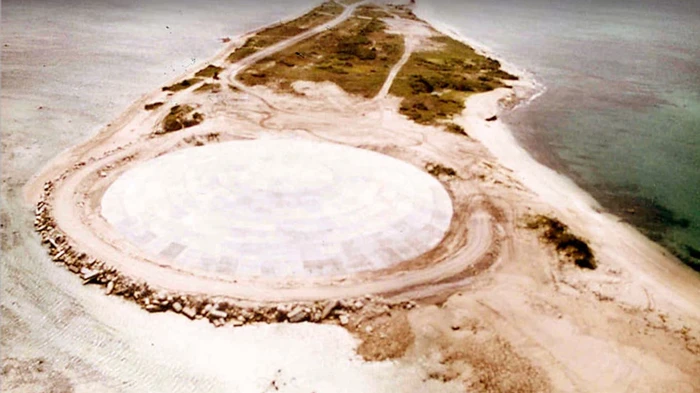 During the Cold War, the United States nuked the Marshall Islands 67 times. After it finished nuking the islands, the Pentagon dropped biological weapons on the islands. Once the U.S. was finished, it scooped the irradiated and ruined soil from the islands, poured it into a crater left behind from a nuclear detonation, mixed it all with concrete, and covered the whole thing in a concrete dome. They called it “The Tomb.” According to a report from The Los Angeles Times, climate change is breaking that dome open. Rising sea levels and temperatures are cracking open The Tomb, threatening to spill nuclear waste into the Pacific Ocean.

The Marshall Islands is a collection of 29 atolls across 1,156 islands. More than 50,000 people live on the islands. From 1946 to 1958, it was a proving ground for America’s nuclear arsenal. On March 1, 1954, the Pentagon conducted Castle Bravo and detonated a 15 megaton thermonuclear warhead over the Bikini Atoll. It was the largest nuclear weapon the U.S. ever detonated.

The fallout from the explosion rained down on the people of the Marshall Islands.

“It was only a matter of two or three years before women on the island started to give birth to things less than human,” a Marshall Islands woman told diplomats on a fact finding mission decades later. Birth defects are so common on the islands that the people have a number of words to describe them, among them marlins, devils, jellyfish children, and grape babies.

The U.S. has largely dismissed its responsibility to the Marshall Islands. It relocated many of its people and claims the cost of relocation and installation of The Tomb at the Enewetak Atoll covers its liability. As sea levels and temperatures rise, however, the Tomb is cracking. As it cracks, water rushes over it, leaching out plutonium and dumping it into the sea.

The U.S. has said The Tomb is now the Marshall Islands’ responsibility.

“I’m like, how can it [the dome] be ours?” Hilda Heine, the president of the Republic of the Marshall Islands, told The Los Angeles Times. “We don’t want it. We didn’t build it. The garbage inside is not ours. It’s theirs.”

And what about Johnston Island located 800 miles south west of Hawaii where 12 nuclear atmospheric tests were conducted.   Two nuclear weapons also blew up on the launch pad contaminating  the island with plutonium.  For years Johnston also was the storage and disposal site for chemical and biological weapons, many of which were incinerated there.  The original size of Johnston island was enlarged by dredging for the harbor there, but it is likely that the island will revert to it’s original size or even smaller as a result of climate change.  The big question is what will happen to all those nuclear, chemical and biological contaminants there that were put in a large hole and simply capped with dirt and a sign placed on the island — “Wildlife Refuge,” before the military abandoned the island.  There were reports that following the plutonium accidents on the launch pad that the plutonium was simply bulldozed into the lagoon  In 2018 Johnston took a direct hit from a hurricane.  I wonder what was washed off the island already with that and other storms and have the currents brought that toxic pollution to Hawaii’s shores and waters.

Below is a study of Plutonium fallout from atmospheric nuclear tests.  Please note that of all the soil samples tested, the soil sample with the highest level of plutonium contamination worldwide was from Papaikou, Hawaii, four miles north of Hilo.  The correlation seems to be the high rainfall bringing the fallout down on the east side of the Hawaiian Islands.  The upper jet stream winds which travel west to east (opposite the trade winds) would have brought the fallout eastward from Johnston to Hawaii.  I would suspect that all the windward sides of the Hawaiian Islands received plutonium fallout from Johnston Island tests in the late 50s and early 60s.  One of the atmospheric nuclear tests done at Johnston in 1962 resulted in street lights on Oahu and phone lines on Kauai being knocked out by the electromagnetic pulse of the atmospheric nuclear blast.

See — Just after 11 p.m. Honolulu time on July 9, 1962 the 1.45-megaton hydrogen bomb was detonated thirteen minutes after launch from Johnston Island. Almost immediately, an electromagnetic pulse knocked out electrical service in Hawaii, nearly 1,000 miles away. Telephone service was disrupted, streetlights were down and burglar alarms were set off by a pulse that was much larger than scientists expected….

The following letter is one of the most important ever published in the British journal Nature, providing baseline data about the dispersal of weapons testing-derived fallout plutonium as well as plutonium isotopes derived from the 1964 satellite accident.  Hardy, et. al. used the reporting unit of mCi/km2.  This can be converted directly to the more understandable (for the layperson) reporting unit of pCi/m2.  Few areas in the northern hemisphere contain less than 1000 pCi/ m2 of fallout 239Pu, 1/2 T 24,240 years.  Even though this fallout is stratospheric rather than tropospheric, the higher values in soils are correlated to some extent with locations having the greatest annual precipitation, as well as mid-latitude locations.  One to four thousand pCi/m2 of fallout 239Pu is the minimum baseline level of plutonium contamination in the northern hemisphere.  More recent research identifies numerous areas with much higher levels of plutonium in soils, see especially the data collected pertaining to the Rocky Flats facility in Colorado.

Below is a scan of page 444 followed by a more readable enlargement of the table.  See RAD 8:5 Anthropogenic radioactivity: Baseline data: Plutonium and Americium for more comments on this article and other information on plutonium fallout.  For more information on this satellite accident, consult RAD 11:9 Anthropogenic radioactivity: Major plume source points: Nuclear Powered Satellite Accidents. 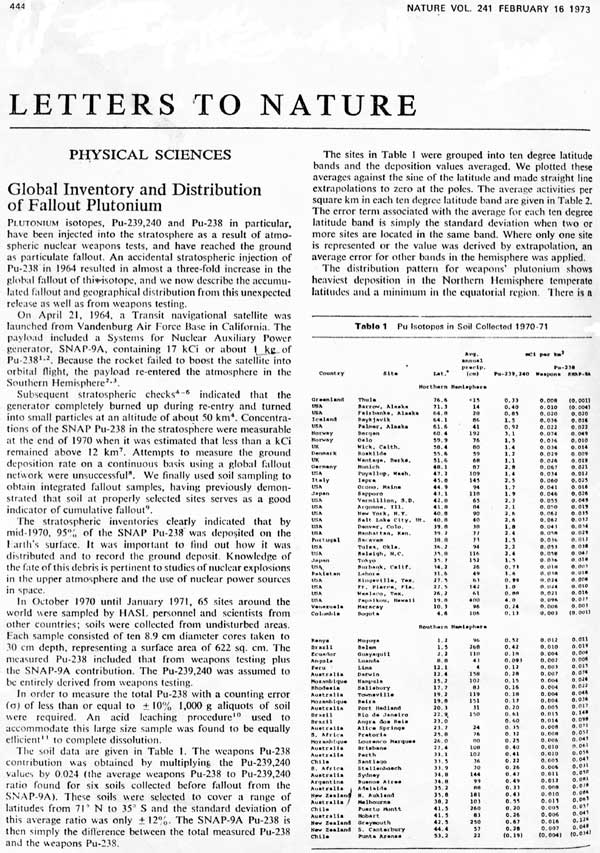 Below we have enlarged the table so it is readable: 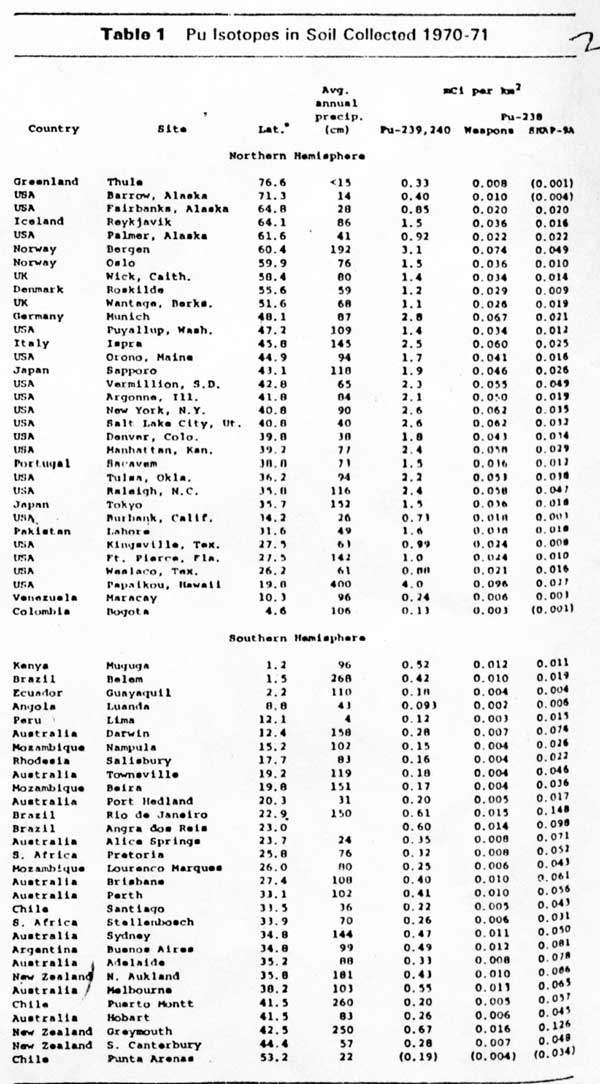