Gandhi after His Anniversary

The 150th anniversary of Mahatma Gandhi was celebrated this past 2nd October with great devotion and fanfare in many parts of the world. Of course in India there were countless events both prior to and on the particular date; there were newspaper reports, lectures, skits, documentaries, films all highlighting his memories, mostly positive but a few criticising him. One such was called Gandhi the Subversive.

The events were organised by the Indian Government as well as by some institutions such as Gandhi Bhawan of Delhi University and Gandhi Museum and Library and several other institutions. A few statues of the great man were also installed in those places that already did not have one. It would be difficult if not impossible to know how many statues or busts of Gandhi are already installed. Most countries have these in their prominent places as well as in several museums and art houses. The town Pietermaritzburg in the province of Zulu-Natal in South Africa became notorious since Gandhi was thrown out from a first class coach of a train that he was travelling along that town in 1893. This town has also installed a statue of Mahatma Gandhi a few years back.

Gandhi himself was not happy with the erection of his statues or busts— he said he would feel happier if people followed his ideals of truth, nonviolence and simplicity. Today people are being urged to lead simple lives in order not to pollute our environment beyond repair.

Apart from installation of statues or busts and having lectures or films etc, some unusual events have also been organised. One such was a small skit by blind children depicting some important event of Gandhi’s life. It was amusing to see eight or ten year olds dressed like Gandhi and bending forward with a stick in the hands of the child. They also sang some favourite songs of Gandhi especially Raghupati Raghav that promotes religious tolerance and amity. This song is sung everywhere but the singing by blind children added a sense of peace, harmony and nostalgia.

Artist Debanjan Roy from Kolkata, West Bengal, has depicted Gandhi in a different light. He feels that Gandhi has often been misused by some persons including politicians to publicise their own narrow agendas, rather than follow Gandhi’s ideals. At political events, Gandhi is promoted as the means for development and harmony. But Roy feels that the sacrifices that Gandhi made, the Satyagraha that he discovered in S Africa and widely used subsequently in India,  is largely forgotten. His practices — Maun Vrat— remaining silent and fasting for political principles, are not followed by many of today’s political figures.  Roy’s paintings have been shown in an exhibition named ‘Toying with Gandhi’.

Roy has depicted Gandhi and his wife Kasturba as a set of Russian dolls. He feels that Gandhi learnt many aspects of his politics from Kasturba. Gandhi was also influenced by his mother Putli Bai   — for his religious amity and regular fasting.

The Gandhian anniversary is formally over, but various events — skits, exhibitions, reports of some of his relatively unknown relationships with various personalities continue to be documented. It was the famous scientist Albert Einstein who had once said that the future generations will hardly believe that a man called Gandhi ever walked in flesh and blood on this planet. 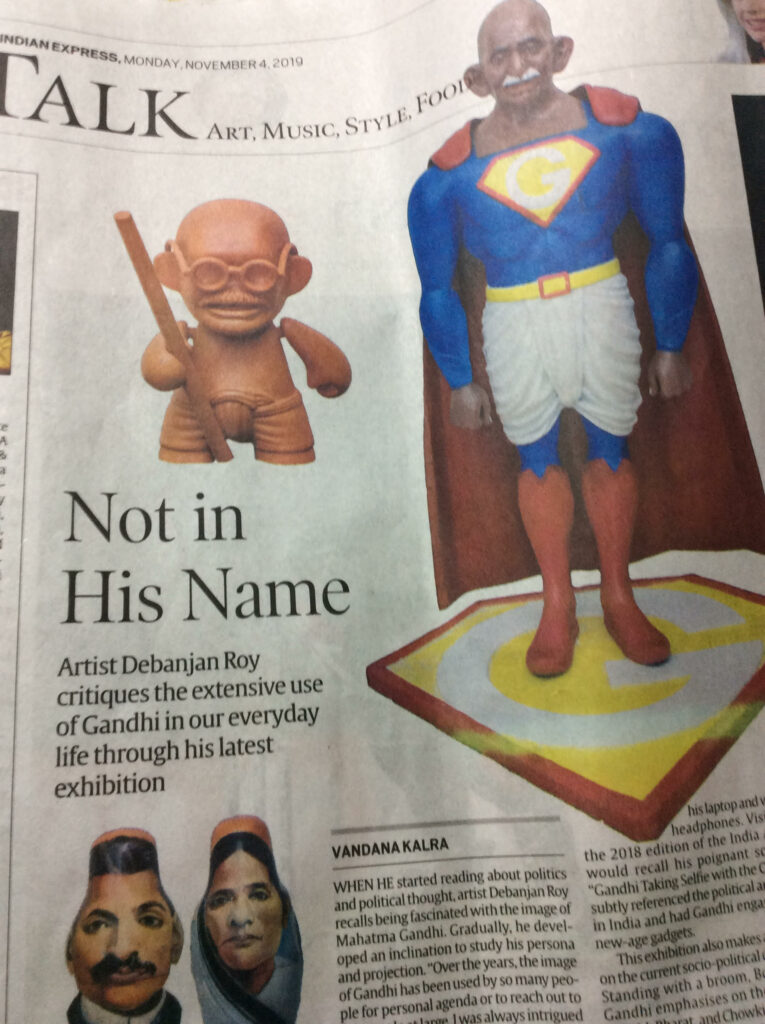 Anticopyright: Editorials and articles originated on TMS may be freely reprinted, disseminated, translated and used as background material, provided an acknowledgement and link to the source, TMS: Gandhi after His Anniversary, is included. Thank you.