Number of Areas Impacted Could Be Bigger, as New Reports of Oil Stains Emerged over the Weekend 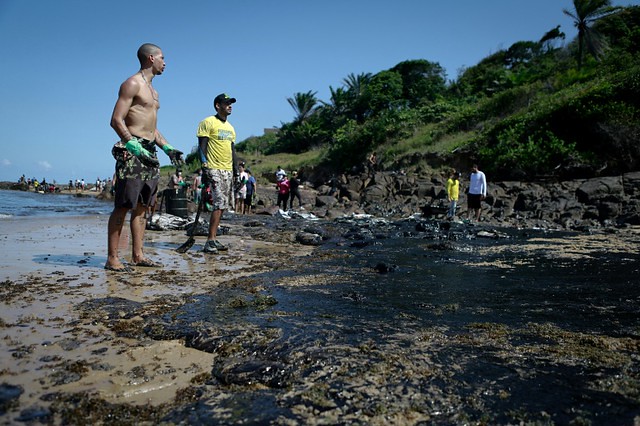 19 Nov 2019 – A report disclosed by the Brazilian environmental agency Ibama shows that 643 areas have been hit by an oil spill that has been washing up thousands of kilometers of the country’s coastline since early September.

Reports of oil stains have been found in 116 cities in all northeastern states, as well as Espírito Santo, in the Southeast of Brazil.

Nevertheless, the number of areas impacted could be bigger, as the Parnaíba Delta Ecological Sanctuary, in Piauí state, was also hit by oil stains on Saturday, and it is not included in Ibama’s list.

Six areas were reportedly hit in the Parnaíba Delta, a sanctuary that encompasses 70 islands and beaches.

The Brazilian Army, the Navy, and the Chico Mendes Institute for Biodiversity Conservation (ICMbio) have launched a massive operation to stop the oil from getting to the Parnaíba River. The Navy reported that 5,000 agents were deployed to clean-up operations, as well as 37 ships and 11 aircrafts.

Another conservation area that could be hit is a manatee sanctuary in Porto das Pedras, Alagoas. Aquatic Mammal Foundation (FMA) agents are concerned about Astro, a rare manatee who lives on the coast of Sergipe state since 1998. The agents are monitoring it, but it is at risk of contamination. Mangroves and beaches nearby have been hit by the oil.

The country’s Federal Police believe that a Greek-flagged ship could have caused the oil spill on Brazil’s coastline.

The police reported that the tanker docked in Venezuela on Jul. 15, and set off to Singapore three days later.

The spill probably happened between Jul. 28 and 30, authorities said, 700 kilometers (430 miles) off the Brazilian coast, in international waters. The Federal Police informed that only one oil tanker was navigating near the suspected origin of the spill.

However, the Federal University of Alagoas announced on Sunday that researchers found another vessel that could be the source of the leak. The name and the flag of the tanker were not disclosed.

The Brazilian government has been decried for initially disregarding the oil spill. On Nov. 6, the Environment minister, Ricardo Salles, tried to explain the government’s inaction by blaming previous administrations.

“A lot of the problems regarding equipment or budgetary issues are the result of one thing: we were handed over a State that is broke. It’s broke thanks to the policies of some parties that are represented here, which ultimately resulted in the imprisonment of president Lula and so many other political leaders of this doctrinaire current,” Salles said.

A week later, on Nov. 11, after new oil stains were reported in Sergipe state, the federal prosecutor’s office requested that the federal courts in the state ordered the government to hold an extraordinary meeting to discuss actions for protection, recovery, and compensation for the social and environmental damage resulting from the spill.

The prosecution requested that the meeting was held last week, and the government could pay a R$1 million (US$250,000) fine a day in case of delay, and the money should be used to fund social and environmental actions in the nine states of Brazil’s Northeast.