Warning of ‘Untold Human Suffering,’ Over 11,000 Scientists from Around the World Declare Climate Emergency

“Scientists have a culture of reticence when it comes to making statements like this, but the emergency is rapidly accelerating, and the scientists are very clear: this is an existential emergency.” 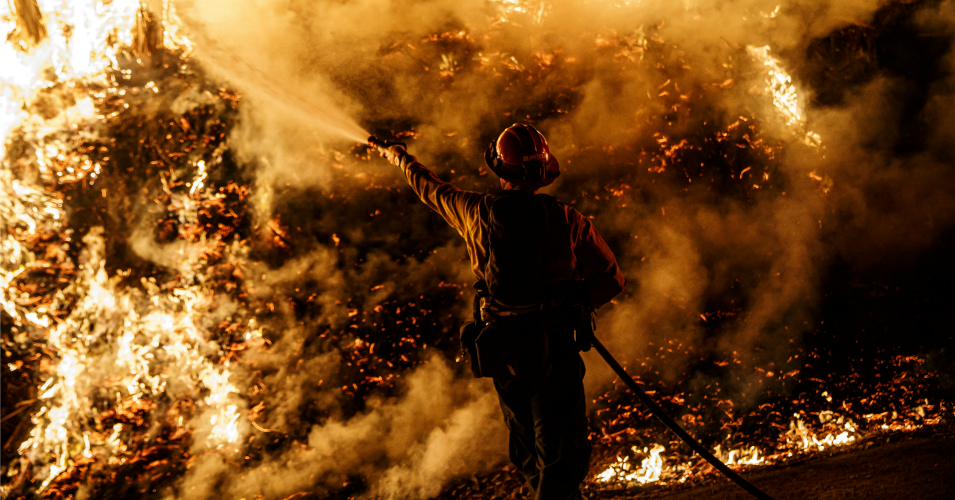 Firefighters sprays water on a back fire while battling the spread of the Maria Fire as it moves quickly towards Santa Paula, Calif., on Nov. 1, 2019.
(Photo: Marcus Yam/Los Angeles Times via Getty Images)

5 Nov 2019 – More than 11,000 scientists from 153 countries today officially declared a climate emergency and warned of “untold human suffering” if immediate bold action is not taken to stop the warming of the globe.

In a paper published in BioScience, researchers at Oregon State University said they have a moral duty to “tell it like it is” and warn people about their findings about indicators of the rapidly changing climate over the last 40 years.

The scientists’ research shows significant rises in carbon in the Earth’s atmosphere, the planet’s surface temperature, sea levels, and land area burned in the United States. 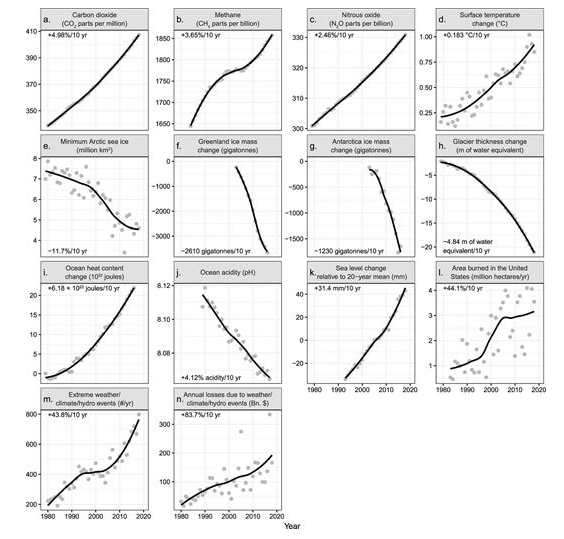 “Global surface temperature, ocean heat content, extreme weather and its costs, sea level, ocean acidity, and area burned in the United States are all rising,” William Ripple, who co-authored the study and led the worldwide coalition of scientists who warned of the climate emergency, said in a statement. “All of these rapid changes highlight the urgent need for action.”

Climate action advocates applauded the report and urged policy-makers and the public to take heed of the findings:

11,000. 11,000 scientists. Not a few nutcases. Not a single shady think tank. A clear and immediate warning, with multiple indicators. If you're not listening now, you are simply singing loudly with fingers in your ears. But your ignorance won't save you. https://t.co/JQKk5R70br

If we wait for things to get really bad, it will be too late. When things get really bad, the corporations and billionaires who caused this will use the crisis as pretext to bleed working people dry while our environment collapses around us… (1/2) https://t.co/aUnZNxSCNA

Scientists around the world are clear: this is an emergency and we need transformative action by our governments.

We need a #GreenNewDeal.
https://t.co/XasL7VFRAe

U.S.-based group Climate Mobilization expressed hope that the unequivocal demand for action from the science community would be “the final nail in the coffin of climate deniers who lie to the public about the extent to which climate emergency threatens our nations and families.”

“Scientists have a culture of reticence when it comes to making statements like this, but the emergency is rapidly accelerating, and the scientists are very clear: this is an existential emergency, and we need to rapidly transform our economy and society right now to protect humanity and the living world,” Klein-Salamon said.

Echoing the calls of climate campaigners, the scientists urged a number of steps that must be taken “to avoid untold suffering due to the climate crisis,” including:

In recent months, the grassroots movements Extinction Rebellion, Fridays for Future, and the Global Climate Strike have demanded the world governments declare a climate emergency in order to push the immediate action needed to combat fossil fuel emissions and the warming of the planet.

The scientists wrote that they’re “encouraged” by the recent display of concern by millions of people around the world and that they “stand ready to assist decision-makers” as more of them listen to Extinction Rebellion’s demand that they “tell the truth” about the climate crisis.

“We believe that the prospects will be greatest,” they added, “if decision-makers and all of humanity promptly respond to this warning and declaration of a climate emergency and act to sustain life on planet Earth, our only home.”

Read the scientists’ paper and call to action: HERE

One Response to “Warning of ‘Untold Human Suffering,’ Over 11,000 Scientists from Around the World Declare Climate Emergency”