“Cause how many times can you wake up in this comic book and plant flowers?”
— Rodriguez, “Cause”

It’s not funny, that’s for sure.

When I went to see Joker, the new Todd Philips’ film, there were five other people in the theater in the liberal, up-scale tourist town populated by wealthy second-home owners, exiles for the most part from Gotham City (NYC). When the cave’s wall lit up, there was a string of shadows projected onto it, advertisements looping repetitively for the town’s “advantages,” specifically “living and working in the same community,” something next to impossible in the town except for the affluent people who didn’t want to see Joker, the story of a guy in New York City whose penurious and fragile existence belies the false innocence of the wealthy elites who deny succor to the suffering poor, as the obscene gap between them grows apace.

It occurred to me that Joker, with his keen eye for the ironic hypocrisies of all that surrounds him, would get a laugh out of these preliminary promotions, for he himself has a bit of a problem and no advantages living and working in NYC.  And he would understand why the rich would shun his story, having no doubt heard that it was violent, since they are squeamish about violence directed toward their kind, but great supporters of violence directed toward the poor around the world by the American military and at home by the police, both of whom work for them.  Such official violence, of course, is something that they never have to see because they live in doll houses constructed out of a vast tapestry of lies and illusions, where the windows don’t open out onto the wider suffering world but reflect inward their self-absorbed lives where people like Joker are invisible.

The repetitive shadows on the wall in the theater were advertising local services.  Real estate, landscaping, high-end jewelry and furniture, life style companies, architects – all the amenities of the rich and famous.  Like those who absented themselves from the theater so as to avoid a painful confrontation with truth, I knew violence was on the horizon and had to laugh at the services being offered before Joker made his first appearance.  It was my last laugh.  I imagined him laughing also. 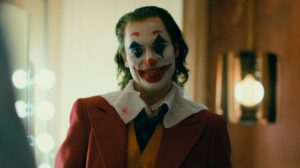 Then he was there, big as life, Joker, a man emaciated like a Giacometti sculpture portrayed by Joaquin Phoenix, who from the moment he appears, brilliantly makes you realize that a poor and suffering thin man exists and attention must be paid. The viewer is mesmerized from the start as Joker, aka Arthur Fleck – fleck: a small particle, a stain – tells us that “I just don’t want to feel so bad anymore,” despite the seven medications he takes to ease his pain.  This “stain” on the social illusion of fairness and decency is a guy with no money or jewels to believe in, no real estate, no amenities, a guy who has no grass to be cut or beautiful plants to be tended to in his sad concrete apartment where he barely exists with his ill and deeply depressed mother whom he cares for. “I don’t believe in anything,” he tells us, ironically echoing the unacknowledged nihilism of the upper classes.  But he has good reasons, while theirs are rooted in their worship of power and money that undergirds the capitalist system of exploitation that creates suffering souls like Arthur, whose mental illness reflects a social system that is insane and violent to its core.  It is no joke.

As I watched his story unfold, I recalled the time frame of the movie, the late 1970s or early 1980s, when my wife and I lived in NYC, subletting various apartments.  When we first arrived in our old car, friends put us up at their apartment.  We had little money, and the first night when we stayed with our friends, we parked on the street and left most of our suitcases with all our belongings in the car overnight. In the morning, all the suitcases had been stolen.  Welcome to Gotham City.  While it felt like a liberation to me, as if now I could start a new life, my wife felt otherwise, as might you.  But it was our introduction to NYC.  And while we were young and educated and had the wherewithal to get jobs to pay the rent and live reasonably well, unlike Arthur Fleck, our time there was a wearing one.  The city seemed dirty, unsafe, depressed, depressing, and teetering on the edge of some sort of death.  Hope seemed to have died along with the radical dreams of the 1960s when I lived there.  After moving from one apartment to another all around Manhattan and Brooklyn, we had our sublet on West 103rd street broken into in broad daylight.  We were worn down by it all, and when we took a walk one day along the Hudson River in Riverside Park, we saw ahead of us three very large cats cross the walkway and a woman scream in terror at the sight.  As we got closer, we realized the cats were rats, and we took it as a sign to make our exit, as if Camus’ plague were encroaching. So we did so shortly thereafter, borrowing a tent and heading to the country, never to return. 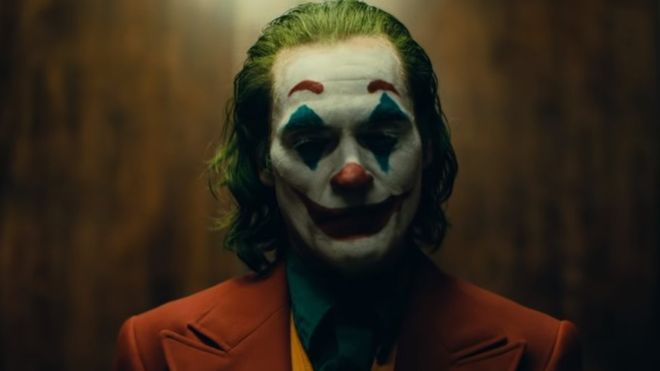 Poor Joker had no such option.  He was trapped.  Fired from his day job as a clown at children’s parties and store closings, ridiculed and bullied by co-workers, friendless, he continues to dream of being a stand-up celebrity comic as he and his mother laugh at a late-night television talk show they are addicted to.  They revere the host, and Arthur dreams of appearing on his show and making his breakthrough in comedy.  Laugh or cringe as we may, their reverence for the host, played by Robert DeNiro, reflects American’s dirty open secret: the adoration of celebrities and the wealthy.

Life goes from bad to worse for the two of them, becoming a total nightmare, and the viewer is drawn into its dream-like confusion, never being sure what is real and what are Arthur’s hallucinations.  Fact and fiction meld in a transmogrification that is film’s specialty.  Like life today in a screen culture, one’s mind vacillates and one wanders through it – or is it Arthur’s mind – wondering if what is happening in society is actual or virtual.  The viewer feels like he is Arthur/Joker while observing him, a perfect experience of the schizophrenic state of American life today.

The suffering Arthur Fleck is abandoned by a cruel American society whose political order cares not a whit for its regular people, and in a penultimate scene when Arthur is appearing on a late-night television show where the snide and condescending host mocks him and his attempt at comedy, Joker says to the host:

In that quote lies our current fate, the relativistic dark night that has descended on our world since Nietzsche issued his warning about the encroaching nihilism. The system that knows and controls so much decides human truth and what is good and evil, always of course, deciding in its own favor, even to suggest that all is woe and all hope is gone while heading to the bank with its ill-begotten lucre.

This is the void that frames the film, the nihilistic void that so many wish to avoid. To question. To ask themselves where their culpability lies and what is it, beyond creature comforts and social acceptance, that they truly believe.  To understand why jokers like Arthur pop up everywhere.

But people like Arthur get pushed and pushed to the brink, and they look over and see nothing, not even their own reflections in the water, and conclude that that their only hope is to strike back at the people who personify the systemic violence that reduces them to non-entities.

After being tormented by three Wall St. types on the subway while in his clown costume, he finally strikes back and kills them after they sing “Send in the Clowns” to harass him. This gains him anonymous notoriety which he starts to relish. “For my whole life I didn’t know I even really existed,” he says, “but I do. People are starting to notice.”

Of course they aren’t noticing Arthur, but the masked clown whom they now fear. For Joker is the ultimate ironist, a man without a face, the faceless modern, just as all those who hide behind their wealth and public performances are masked actors in a bad play, one they try to control but which sometimes gets out of hand.

For those who say the film encourages violence, I say no; it holds a mirror up to the violence that undergirds the system of economic and political exploitation that already exists. Of course this too is ironic for a Hollywood movie.  Like the films that it echoes – Taxi Driver, The King of Comedy, Network – Joker, like all good works of art, is open to polysemous interpretations.  It encourages introspection and extrospection.  It asks viewers to question themselves and their part in the social charade that passes for a just and equitable society. It asks viewers to contemplate Dr. Martin Luther King’s statement that is as true now as when he uttered it:

“The greatest purveyor of violence in the world: My own government.  I cannot be silent.”

The joker’s joke is no joke at all.  It is deadly serious.

When Arthur Fleck says, “I used to think my life was a tragedy, but now I realize it’s a comedy,” and unleashes his murderous violent rage with a Joker’s smile, he was turning into those he condemned as his oppressors.  Their nihilism became his own; their violence his.

The film asks us to contemplate such a marriage of seeming opposites, its dialectic, and not turn away from the faces in the mirror.

“Have you ever noticed that it is the most civilized gentlemen who have been the subtlest slaughterers, to whom the Attilas and the Stenka Razins could not hold a candle, and if they are not so conspicuous as the Attilas and Stenka Razins it is simply because they are so often met with, are so ordinary and have become so familiar to us,”

But where are the rats?
Quick, send in the rats.
Don’t bother, they’re here.

They have taken complete ownership of Gotham City.

Edward Curtin is a writer whose work has appeared widely. He is a member of the TRANSCEND Network for Peace Development Environment. Website: Behind the Curtain

Anticopyright: Editorials and articles originated on TMS may be freely reprinted, disseminated, translated and used as background material, provided an acknowledgement and link to the source, TMS: What’s Joker’s Joke?, is included. Thank you.