10 Dec 2019 – For indigenous communities on the Bering Sea, a way of life is at risk as climate change hits fish populations and ricochets through ecosystems. 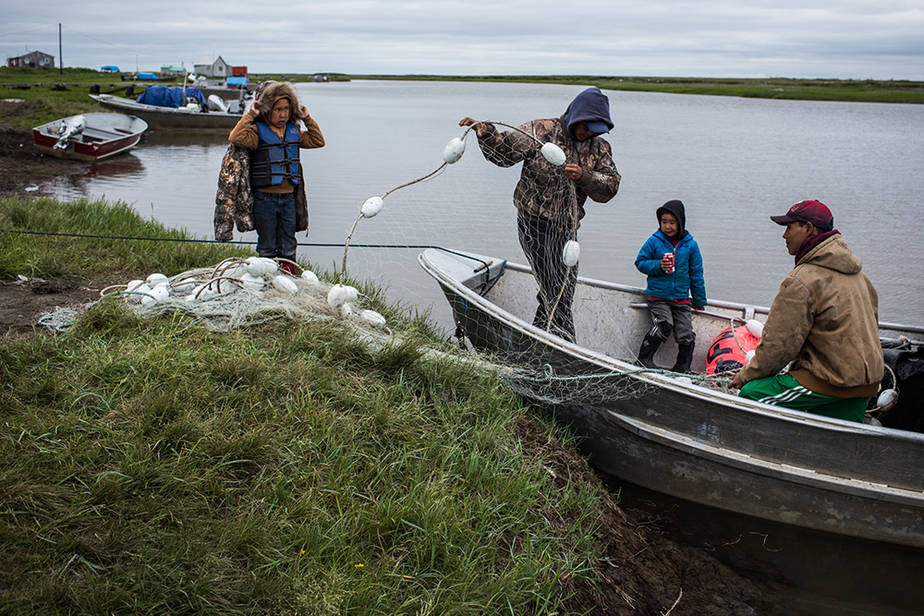 Yupik men prepare a boat to fish for salmon on the Bering Sea. Rising temperatures are affecting their lives in many ways, from the impact on the sea life they depend on for food to sea level rise and erosion that is damaging their coastal communities.
Credit: Andrew Burton/Getty Images

When dead salmon wash ashore along the coast of the Bering Sea, the problem is much bigger than dead fish. It’s a sign of deeper trouble cascading through the Arctic’s ecosystems.

It’s been happening more and more the last few years—fish, dead or dying, rolling in with the tide, said Mellisa Johnson, executive director of the Bering Sea Elders Group. “The seals, they don’t want to eat those types of fish. They know they’re unhealthy for consumption. So then they don’t have enough fat reserves to last them.”

As the Arctic warms roughly twice as fast as the rest of the planet, the effects are reverberating far beyond any single species. Massive systems—from the sea ice and permafrost to the jet stream—are beginning to behave in unexpected ways.

The changes are impacting species, fishing industries and local communities, including the people who have long called Bering Sea communities home. Indigenous hunters are working harder than ever to find the food they have long relied on, and they’re sometimes making macabre discoveries: sea birds dying en masse, nets filled with fish that have rarely been seen in those areas.

These lost, dead and dying species are sending a message, loud and clear: the Bering Sea is sick, Johnson said.

Climate change is playing out across the Arctic in dramatic ways. The National Oceanic and Atmospheric Administration (NOAA) and its partners describe many of them in their annual Arctic Report Card, released Tuesday. Among the 2019 report’s findings:

The report walks through changes taking place across the region—how warming global temperatures lead to melting sea ice and decreased snow cover, which then contribute to further warming. How a warmer ocean is having myriad effects, like causing species to shift their ranges and making it harder for sea ice to form, as well as impacting weather at the mid-latitudes. 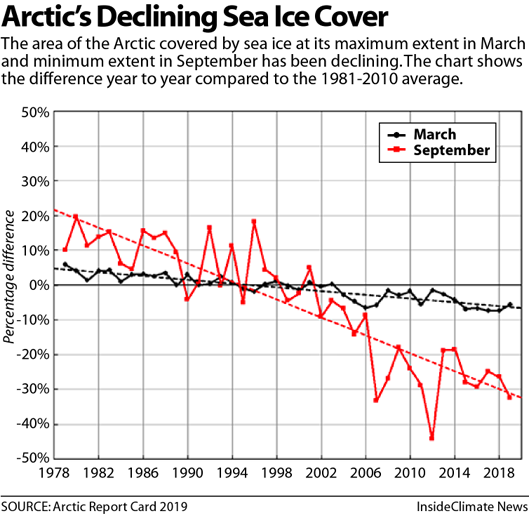 What’s abundantly clear: the various systems at work in the Arctic are connected, and what happens in the Arctic does not stay there. As the globe’s refrigerator, when the Arctic warms up it can have impacts on the mid-latitudes, from rising sea level due to melting in Greenland to changes to the jet stream.

The word “Arctic” may trigger a fairly uniform image—ice covered water, maybe a polar bear—but the region contains very diverse areas, all of which are experiencing climate change in different ways. The global picture of what’s happening in the Arctic, defined by less sea ice, warming permafrost, and higher temperatures on land and in the ocean, is actually more extreme when zeroed in on in certain places.

This year’s Arctic Report Card had a special focus on regions that are being hit the hardest, including the Bering Sea.

“Recent conditions in the Bering Sea offer an excellent, albeit disquieting, example of the strong connections within the Arctic marine environment,” wrote the authors of the report. The last two winters have seen dramatic lows in sea ice in the Bering Sea—roughly 30 percent the average from 1980-2010. And parts of the region that historically saw ice in the winter haven’t seen any in years.

That’s having ripple effects throughout the region and globally. Open water can absorb more heat from the sun, heating the ocean and then feeding that heat back to the atmosphere. As the ocean heats, it can have dramatic impacts on the biological timing of microscopic species, which are the base of the food chain. Then there are impacts to the fish—some dying, some moving north in search of colder water—that seals, walrus, sea birds and other species need to survive. 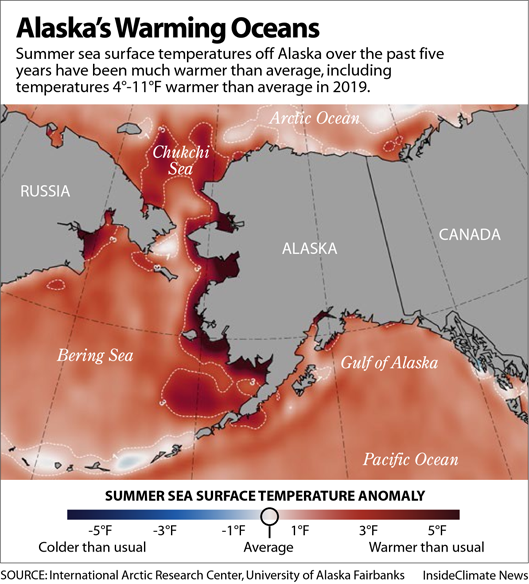 The elders in Johnson’s group represent 38 communities on the front lines of those changes. Bering Sea communities rely on the ocean for sustenance and for economic survival. The fisheries there provide more than 40 percent of the U.S. catch of fish and shellfish, valued at more than $1 billion annually.

“The summer distribution of fishes and invertebrates living near the seafloor on the Bering Shelf is tied to the extent of the cold bottom water temperatures as determined by the southern extent of sea ice during the preceding winter,” write the report’s authors.

It’s not just the Bering Sea that has experienced anomalies. Along Alaska’s northern coast, the Chukchi Sea has seen extraordinary warmth, leading to far less ice than usual.

“We’ve seen low extents in the Beaufort and Chukchi seas, but this year for the Chukchi, it’s extreme even compared to other years,” said Walt Meier, a senior research scientist at the National Snow and Ice Data Center, and an author of the report.

“It’s the slowest to freeze up on our record,” he said. “Is that just an extreme this year? Maybe. Or is it indicative of a bigger change?”

In recent decades, sea ice has experienced a massive shift. The extent of the sea ice—how much area it covers—has seen a downward trend. At the end of summer 2019, when the ice had melted to its smallest point of the year, it was tied with 2007 and 2016 as the second lowest in the satellite record (1979-2019). At the end of the winter, when it grew to its largest extent, it was the seventh lowest on record.

In any given year, the ice may rebound a bit—growing back a little more than it had the year prior. But what’s significant is the trend. The 13 lowest events in the satellite record have all occurred in the last 13 years (from 2007-2019) and the September ice extent has not returned to pre-2007 levels.

The age of that sea ice has also fallen. Old ice can grow to 9-12 feet thick. It used to be that about a third of Arctic sea ice was old, said Meier. “Now, that makes up just 1 percent of the ice cover,” he said. “That’s been going on for a few years, and we’re not seeing any recovery in that.” 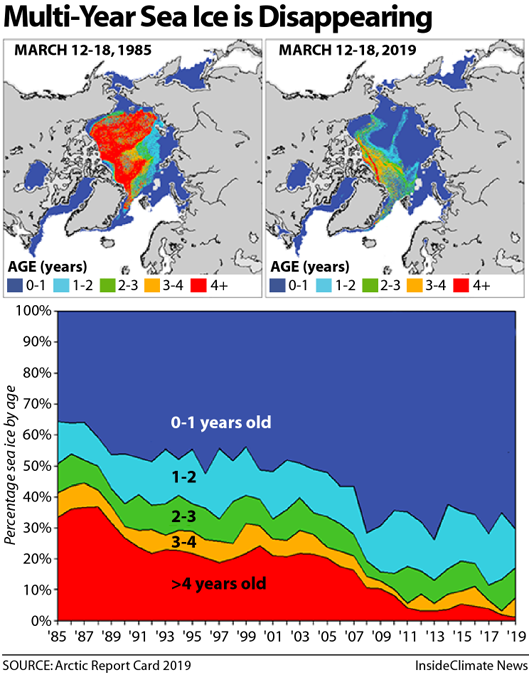 When new ice forms, it’s not as thick—it can grow to a maximum of about 6 feet in the course of a winter—and it’s more vulnerable to breaking up or being pushed around by heavy winds and waves.

This movement may explain a curious statistic: During the time that sea ice age and extent has declined, its volume appears to have increased. Measurements of sea ice volume are fairly new. Data only goes back to 2010, so Meier said he’s wary of reading too much into it. But what it may indicate is that the thinner ice is getting pushed onto the shore in places like Greenland, where it piles up.

Meanwhile, in Greenland, the ice sheet has been experience rapid melting. In 2019, melting started earlier than usual and covered roughly 95 percent of the ice sheet.

When ice on land melts, it contributes to sea level rise. From 2002 to 2019, the report’s authors found that global sea level has risen at a rate of 0.7 millimeters per year due to the melting on Greenland alone.

A separate study in the journal Nature, also released Tuesday, found that the ice losses from Greenland resemble the highest sea level rise scenario that climate change planners have been considering—far higher than previously thought. 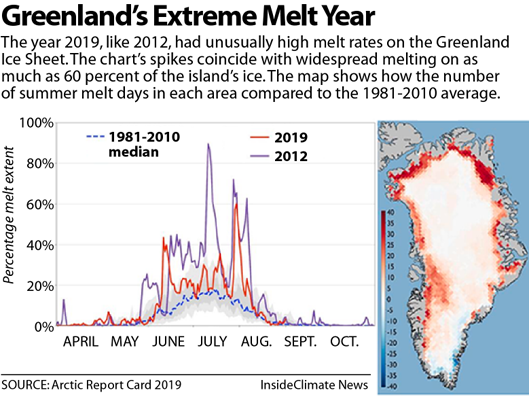 Greenland has lost nearly 4 trillion tons of ice since 1992, the Nature report’s authors found, and the rate at which it is melting has nearly doubled each decade since 1990.

As Arctic ice on the sea and land melts, exposing darker surfaces below, it is continuing to warm the atmosphere and contributing to a trend in which the Arctic is warming significantly faster than other parts of the world.

A study published last week in the journal Science Advances found that the Arctic has warmed 0.75 degrees Celsius (1.35°F) in the last decade alone. It took the Earth 137 years to warm roughly the same amount.

As the Arctic sea ice continues its downward trend, it’s expected that within the next few decades, the Earth will see an ice-free Arctic in the summer, said Meier. That projection alone is significant. Before 2007, the models projected that an ice-free summer could possibly happen by the end of the century.

“I’m 50 years old,” Meier said. “I look at that and I think, I’ll be long gone when that happens, but maybe my grandkids will see it.” Now, since the losses in 2007 and the years since, that has changed. “There’s some wide variation, but the better models converge around the 2040 to 2050 range” for an ice-free summer, he said.

“That’s a half century earlier—something I may live to see,” he said. “It’s a really remarkable and rapid change.”

Sabrina Shankman is a reporter for InsideClimate News focusing on the Arctic. She joined ICN in the fall of 2013, after helping produce documentaries and interactives for the PBS show “Frontline” since 2010 with 2over10 Media. She is the author of the ICN book “Meltdown: Terror at the Top of the World,” and was named a finalist for the Livingston Awards for Young Journalists for that work. Shankman has a Masters in Journalism from UC Berkeley’s Graduate School of Journalism.