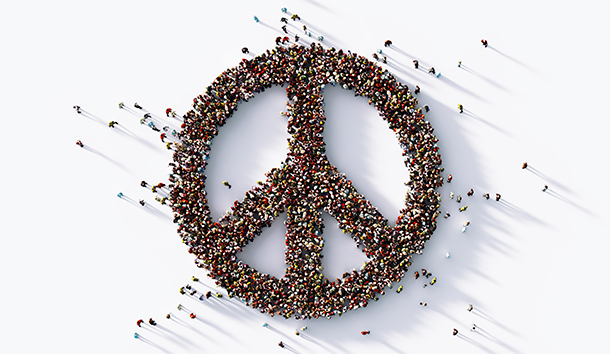 Human crowd forming the ‘Symbol of Peace,’ the logo designed by Gerald Holtom for the British ‘Campaign for Nuclear Disarmament’ in 1958–immortalized as the ‘Hippie Peace Sign’ in the 1960s. The symbol is a super-imposition of the semaphore signals for the letters “N” and “D”, ‘nuclear disarmament.’

Most of us think we know what peace is, but people often have very different definitions of this apparently simple word. And although almost everyone would agree that some form of peace—however it is defined—is desir­able, there are often forceful, even violent, disagreements over how to obtain it.

Frequently, there is an unstated assumption in peace discourses that peace is universal and unchanging. This premise underlies much peace talk, both Western and non-Western. But few if any peace scholars and activists provide reasons and arguments to justify this belief. And most conversations about peace prior to the past century have been among Western and East Asian men of privilege. This is gradually changing, however, as female, non-Western, and previously unempowered peace advocates and peacemakers make their voices heard.

An additional belief, especially in Occidental peace theories prior to the twentieth century, has been that peace is “the absence of war.” In other words, peace has been defined “negatively,” almost always in the context of inter-state political violence. This binary opposition between peace and war entails the further belief that peace and war are mutually exclusive—e.g. nations are either “at peace” or “at war”—and that there is no continuum between war and peace. It also implies that nations (at least from the 17th century on) and empires (through the end of World War I) have been the major peacemakers and belligerents.

However, since, roughly, the mid-twentieth century and the end of the Second World War, other actors, including multinational corporations, non-governmental organizations, peace and related social justice movements, spiritual and religious leaders, and groups labeled “terrorist” by states, have become important players on the global stage. Also, since 1945, intra-state conflicts and proxy wars (especially in the “developing” world) have replaced wars between great powers.

Additionally, there are often significant conflict zones within nations formally “at peace” and without declared civil wars. For example, perhaps the three most powerful nation-states—the United States, Russia, and China— while officially “at peace” among themselves, are riven by internal conflicts and “terrorist” attacks, as in southern parts of Russia, some American cities, and Western parts of China. Systemic racism still lingers in the U.S.; there is widespread lack of freedom for Christians in China and for Muslims in Russia; and all three countries have endemic and increasing inequities of income and power. These and other factors catalyze violent intra-national conflicts, including eruptions of violence between “alt-right” and “anti-fascist” fringes (as in Charlottesville, Virginia) and atrocities committed by disaffected jihadists, labeled “terrorists” by government officials and the mass media, who attack civilians and officials in the superpowers and elsewhere.

During their Cold War from 1945 to 1991, the U.S. and Russia were involved in many belligerent ventures, particularly in Central America, Africa, and Southeast Asia, and more recently in proxy wars, most noticeably in Syria, resulting in the loss of millions of lives, mostly people of color. And China, whose current political posture is consistent with its long history of internal consolidation rather than overseas military adventurism, has recently expanded its global economic presence (particularly in Africa and Southeast Asia), and, while reluctant to do so, may become directly involved in international conflicts, especially those involving the United States, South and North Korea. Even in such failing states as Iraq, there are regions largely immune (such as its Kurdish region) from the civil wars raging through the rest of the country. Hence, there is a peace-war continuum between great powers and within many nations.

The notion of nuclear peace refers to the assumption that the existence of nuclear weapons contributes to international peace and stability. While Steven Pinker presents evidence suggesting the historical decline of interstate wars and other forms of collective violence contributing to the surprising contemporary state of “global peace,” there are others who go as far as to claim that the peace (aka the absence and/or decline of officially declared interstate wars between great powers) Earth has enjoyed since the end of World War II can be attributed primarily to the presence of nuclear weapons.

Nuclear peace, so it is claimed, results from the costs of war being too high—in a confrontation between nuclear powers, the cost of war (national, regional, and/or global annihilation of life) is unacceptable and thus serves as a deterrent. Following this line of thought leads to the desirable outcome of controlling the proliferation of nuclear weapons. An analysis by Victor Asal and Kyle Beardsley indicates that the presence of states with nuclear capabilities reduces the likely levels of violence. But is the alleged 37% decline in the probability of war between nuclear powers worth the numerous risks associated with proliferation of nuclear weapons? (For example, a nuclear arsenal at the disposal of a lunatic president?) Research by Robert Rauchhaus reveals that the odds of war decline in the presence of so-called nuclear symmetry. However, in cases of nuclear asymmetry, the probability of military conflict is actually higher.

Nuclear peace proponents often struggle to explain the risks, tradeoffs, and costs (to health, ecosystems, other government programs) associated with developing, testing, maintaining, and disposing nuclear weapons and materials. According to The Bulletin of the Atomic Scientists, mismanagement and security threats at nuclear sites in the United States continue to occur despite the country’s advanced technologies and capacities.

The US spends almost $6 billion annually to restore the environment and manage the waste related to its nuclear weapons. Costs for compensating affected workers are also extremely high, and the total cost of cleanup is estimated to reach an amount that is far beyond the actual cost of producing the weapons. Furthermore, as David Barash and I have argued, there are numerous “skeletons in the closet of deterrence,” which, taken together, cast doubt on the claim that nuclear deterrence has “worked” to prevent wars between great powers. Finally, should deterrence “fail,” there may be no one left to assess why.

On July 7, 2017, 122 nations voted at the United Nations to approve a global treaty to ban nuclear weapons. While a landmark achievement, none of the nine states with nuclear weapons voted for the treaty; they boycotted the meetings. And therein lie some of the problems with nuclear peace. While most countries voted to ban nuclear weapons, the nuclear powers remained committed to their nuclear programs, and instead of backing a global ban and nuclear disarmament, continue to support nuclear non-proliferation.

Deterrence, therefore, does not apply globally, and the legitimacy of decisions already made about who can own nuclear weapons continues unchallenged. These factors are threats to peace rather than contributors to stability. In addition to the diversion of resources from peace, and the environmental and health damage caused by nuclear weapons programs, Richard Falk also warns of the “moral depravity of relying on genocidal capabilities and threats to uphold vital strategic interests of a West-centric world.”

In his 1964 Nobel Peace Prize acceptance speech, Martin Luther King Jr. declared: “Somehow we must transform the dynamics of the world power struggle from the negative nuclear arms race which no one can win to a positive contest to harness man’s creative genius for the purpose of making peace and prosperity a reality for all of the nations of the world. In short, we must shift the arms race into a ‘peace race’…”. Since King spoke these words, at least 11 nations have abandoned their nuclear weapons programs.

Given human history and the current parlous state of our world, one might understandably be tempted to be skeptical about the prospects for enduring peace on Earth in an era of potential instantaneous global war with weapons of mass and vast destruction.

But it is worth recalling that other political ideals once thought unachievable also came to pass. It took millennia to outlaw slavery and legitimize human rights. It might take at least as long to delegitimize political violence, both from above (by the state) and from below (by non-state actors). Although irreversible “peace on Earth” might be unachievable, at least for a sustained period of time, this does not invalidate the struggle to achieve a world with greater justice and equity and without violence, or at least with significantly less violence, injustice, and inequity. On the contrary, the nonviolent struggle to liberate humanity from its means of self-destruction and self-enslavement is its own end. The absence of a guarantee of “success” in the effort to bring peace to humanity, and the real possibility of the failure of the human experiment, do not undermine the effort to pacify existence but instead bestow on it existential nobility and moral virtue.

Peace is like the human project itself—a work (and a word) in progress. 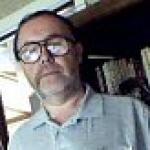 Charles Webel, Ph.D. is a member of the TRANSCEND Network for Peace, Development, Environment. In addition to teaching at UNYP-University of New York in Prague, Dr. Webel has also recently taught in the honors program and peace studies at Chapman University and the University of California at Berkeley. He has also lectured at Harvard, Oxford, and Stanford, among other distinguished universities, and is a five-time Fulbright Scholar, most recently at universities in New Zealand and Burma (Myanmar). He has published many scholarly articles as well as eight books, including the 4th edition of Peace and Conflict Studies (with David Barash) the standard text in the field, The Politics of Rationality, and three books on terrorism.

One Response to “Is Peace Possible?”