19 Dec 2019 – Throughout Portugal, people are organizing to stop a boom in lithium mining, as the government rushes to become Europe’s top supplier of the valuable mineral. 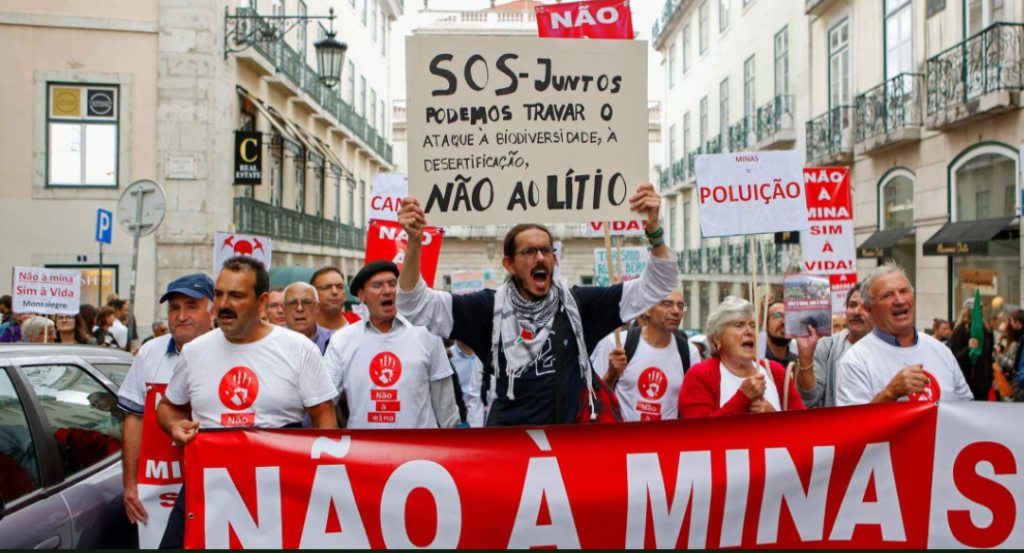 A protest against lithium mining in Lisbon on Sept. 21. (WNV/Lusa/António Pedro Santos)

The global transition to renewable energy and electric vehicles — technologies that are currently powered by lithium-ion batteries — is creating a high demand for lithium, popularly known as white gold, among other minerals. In Portugal, where some of the largest reserves of lithium in Europe are located, the government recently launched a strategy to increase mining and supply of the mineral for this emerging market. However, residents and organizations throughout the country are questioning the impacts of that large-scale mining plan and who will really benefit from it.

“Lithium mining in Portugal involves large open-cast mines that rip open huge tracts of land-destroying soils and ecosystems,” said Laura Williams, a resident based in central Portugal, who is having to deal with lithium mining activities on her doorstep. “It uses huge amounts of water in the processing, which then contaminates ground and river water. The huge machines that are used have a massive impact in terms of noise and vibrations on local communities.”

In August, Williams helped to organize a creative protest at the highest point in mainland Portugal, on Serra Da Estrela Mountain. About 400 residents gathered to create an art image with their bodies — of a tree and water circle — to send a collective message: “No to Mines, Water is Life.” The demonstration was filmed with drones and distributed across the media to raise awareness about the environmental and social impacts of mining for lithium and other minerals, which are often not officially disclosed.

“I do not campaign on this issue simply to get mines out of Portugal and send them somewhere else,” Williams explained. “For me, the real issue is that attempting to solve an ecological problem with a solution that involves more extraction — in this case, mining for lithium to make electric cars to reduce CO2 emissions — is not a solution. In fact, it is heading in the opposite direction of what is called for at this time: to protect and restore ecosystems.”

In the last three years alone, Portugal has received hundreds of requests for prospecting and exploration of lithium by national and foreign companies. Today it is estimated that lithium prospecting already covers more than 10 percent of the country’s territory. And in some cases, proposed areas of exploration are adjacent to protected or classified sites, which is fueling opposition.

In the Serra da Estrela region, for example, several requests for the prospecting of lithium and other minerals were recently made. However, the area is surrounded by sites of cultural, ecological and geological importance, such as the Serra da Estrela Natural Park, which is in the process of being classified as a Global Geopark by UNESCO. As a result, four local organizations issued a joint written statement to express their “deep concern” and reasons for opposing the mining interests in that area. The groups also declared that they are preparing to give “more rigorous and detailed technical advice on this issue” and urged the local authorities to make their position clear as well.

“We have been working in unison with other associations that are struggling with the same problem,” said Maria do Carmo Mendes, a member of the Guardians of Serra da Estrela, one of the groups confronting mining in sites of community importance. She said that the group has already sent a letter of complaint to the Directorate General for Energy and Geology, the administration that oversees mining developments in Portugal. And together with other local organizations, they are pressuring the directorate for “absolute transparency in the process of granting mining licenses,” in addition to having an outside entity conduct environmental impact studies before a decision is made.

In the north of Portugal, in a rural town called Covas do Barroso, a group of residents has united to defend their land and livelihoods from big mining interests. They came together after finding out about requests for open-pit lithium mining in their area, which is classified as a Globally Important Agricultural Heritage System by the United Nations Food and Agriculture Organization. A spokesperson from the Association United in Defense of Covas do Barroso, announced that the local community realized they would have to fight “powerful economic and political interests.” Therefore, they decided “to unite and speak in unison” to ensure that the rights and needs of the community are respected.

The group has been working to educate the community and has organized protests to persuade the national government to withdraw lithium prospecting concessions in Covas do Barroso, which is already causing environmental and social problems. Last month, after a visit from the state secretary for energy in the City Hall of Covas’ municipality, dozens of residents surrounded the secretary’s vehicle making it difficult for him to leave. As they held posters with messages against lithium mining in the area, protesters shouted: “No to the Mine, Yes to Life.” 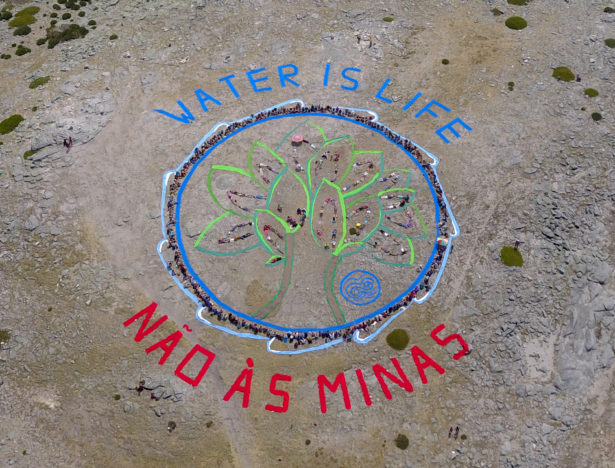 Also, citizens from two neighbor municipalities in central Portugal have united to defend the preservation of the Serra da Argemela region and to “protect the environmental, health, economic and cultural heritage” of its community. The Group for the Preservation of Serra da Argemela, or GPSA, has organized several demonstrations, public meetings and interventions against mining for lithium and other minerals in the region since 2017. This year, following a petition that gained the signature of many residents, organizations and representatives of local government, the group persuaded the national authorities to reject current mining requests in the Argemela (at least, until an Environmental Impact Study is officially presented by mining companies).

“A big victory would be if citizens could rest assured that their rights will always be defended by the state,” GPSA member Ana Morão said, when asked if the Portuguese government’s move was a victory for them. “Until then, in addition to the right to demonstrate, the GPSA will exercise its rights of reply and contestation, particularly in the context of the public consultation that will be carried out alongside the Environmental Impact Study.”

Residents across the country have also been organizing online, through Facebook groups, for instance, to exchange information about the mining development plans and their implications, and to mobilize offline demonstrations.

The Movement Against Mining Beira Serra, is one of the Facebook groups created this year in response to the lithium mining boom, which now has over 5,000 members. Nik Völker, an administrator of the group, said that they are currently focusing on raising awareness around the issue, but have already taken part in local and national demonstrations, information sessions and campaigns in cooperation with other similar movements.

“Our main demand is the right to free, prior and informed consent of any local community being considered for any new mineral exploration or exploitation project,” Völker said. “As long as these conditions are not met, both companies and government will have to deal with our local and national peaceful protest, and possible legal interventions in the near future.”

Vítor Afonso, one of the members from the Movement Against Exploitation of Mineral Resources in the Municipality of Montalegre, a Facebook group with more than 3,600 members, created in May 2019, explained that he is against open-pit mining for lithium and other minerals not only in his area but throughout the country. “It’s not a desirable or sustainable development model,” he said. “The planet has no capacity to regenerate if it continues to be exploited the way it has been.”

As a form of protest against the lithium mining plans for Montalegre, residents decided to boycott the European elections in May and the local elections in October. In addition to demonstrating on the streets during election day, they also placed banners that read “No to the Mine, Yes to Life” in front of the City Hall and across public spaces.

A national platform called Say No To Mines was recently created to facilitate the learning and cooperation between activists and movements that oppose the mining plans, especially for lithium, adopted in Portugal. Yet the Portuguese people are far from being alone in this endeavor. Yes to Life, No to Mining is a global network of and for communities that are battling against destructive mining projects and seeking life-sustaining alternatives.

The exploitation of lithium — considered a fundamental step for an “energy transition” by the Portuguese government — has been systematically contested by the National Association for Nature Conservation, called Quercus. The organization publicly requested an “immediate suspension of the government’s strategy for lithium,” after conducting a study that concluded the process of mining for lithium, a non-renewable resource, will result in “high levels of CO2 emissions.” They estimated that each lithium mine will emit an additional 1.79 million tons of greenhouse gases per year, which means it’s an energy development plan that’s still environmentally unsustainable.

Quercus also organized the first National Forum on the Environment and Lithium, on June 22, that was attended by several representatives of movements, organizations and political parties, who are concerned about the consequences of lithium mining. The event was developed in partnership with the organization Environment in Uraniferous Zones, which has been fighting for the environmental recovery of abandoned uranium mines that still affect the health of local populations in various parts of the country, since 2002.

Alternatives to lithium mining were also discussed in the forum, including the various technologies that can support a sustainable energy transition and electric mobility, such as the use of hydrogen and biogas fuel, which are renewable and generate low or zero carbon emissions. The next steps agreed upon at the event include organizing a formal meeting with all political parties, the minister of environment and energy transition, and Portugal’s president to debate problems with the lithium mining strategy and potential alternatives.

The anti-mining movement that is emerging in Portugal, and growing globally, is a clear sign that a “business as usual” development model — oriented to the ever-increasing exploitation of natural resources and unfair economic practices — is no longer accepted by society. And decision-makers will have to respond accordingly.

“Article 66 of the Portuguese Constitution states that ‘everyone is entitled to an environment of human life, healthy and ecologically balanced, and the duty to defend it,’” Afonso said. “The duty to defend our territories will certainly be exercised [by the people].”