Why Myanmar’s Genocide Denial Will Come Back to Haunt It 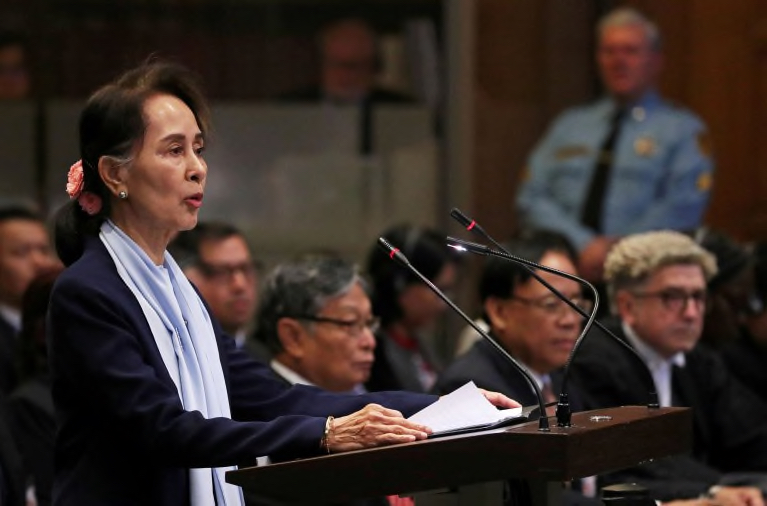 17 Jan 2020 – Last month, Myanmar’s de facto leader Aung San Suu Kyi took the stand at the International Court of Justice (ICJ) in The Hague to rebut allegations that her country’s systematic persecution of its Rohingya population amounts to genocide. Aung San Suu Kyi, once lionized for her stand against an oppressive military dictatorship, strenuously denied the charges — despite reams of evidence and the presence of nearly 1 million Rohingyas in refugee camps in Bangladesh. They ended up there after fleeing a so-called counterterrorism campaign by the Myanmar military in 2017 that left uncounted thousands dead.

The ICJ has announced that it will issue a preliminary judgment in the case on Jan. 23. Yet one outcome is already clear: Aung San Suu Kyi’s defiant genocide denial generated an outpouring of approval back home, bolstering support for her as well as for anti-Muslim nationalism. This is chilling not only for the Rohingya and other Muslims inside the country. It is also extremely dangerous for the multiethnic and multi-religious state of Myanmar as a whole.

The case against Myanmar, which was filed by Gambia, draws on reports filed by United Nations investigators. They found that Myanmar has committed “gravest crimes under international law.”

Pending a final decision in the case, Gambia’s legal representatives have asked the judges to issue binding provisional measures in order to ensure the protection of 600,000 Rohingya who remain trapped in Myanmar, given that the head U.N. investigator warned of “a serious risk of genocide recurring.” Aung San Suu Kyi urged the court to dismiss the case, arguing that the U.N. investigators’ investigations are not credible and that Myanmar should be left to investigate its own wrongdoing.

As I attended the hearing, I found Aung San Suu Kyi’s defense of the military disconcerting enough. But the real shock came during her televised address to the nation on her return from The Hague.

Aung San Suu Kyi used her speech to play to Buddhist nationalist sensibilities. Many in Myanmar believe that Western powers, following instructions from the oil-rich nations of the Islamic world, are ganging up on a poor little Buddhist country. Aung San Suu Kyi tried to capitalize on these attitudes by assuring her listeners that “we will overcome every challenge with our seamless unity, solidarity and bonds of blood.”

Since Myanmar won its independence from Britain 72 years ago, nationalist sentiments among the ruling elite have proved to be one of the greatest obstacles in building a peaceful post-colonial nation out of a rich diversity of ethnicities, religions, cultures and political histories.

Successive generations of politicians and generals, most of them from the country’s overwhelmingly Buddhist Burmese majority, have used nationalism to bolster their rule. From almost the moment it achieved independence in 1948, Myanmar has confronted a long series of armed rebellions waged by the country’s national minorities.

These groups — often inhabiting resource-rich regions along the country’s periphery — have commonly experienced Myanmar independence as another form of alien rule, even more repressive than British colonialism.

After a landslide victory in the 2015 general election, Aung San Suu Kyi took office as state counselor, making her the country’s de facto leader. She promised nationwide peace and genuine reconciliation but has signally failed to deliver. The cease-fire process has stalled. This bodes ill for the future of the entire country — including the Burmese majority, which remains far too complacent about the desperate need for peace.

Meanwhile, Aung San Suu Kyi’s government has failed to create a “conducive environment” for the repatriation of the exiled Rohingyas. Violent clashes continue to plague Rakhine state, the home of most of the Rohingya. No wonder only 415 of them — out of the nearly 1 million living in the camps in Bangladesh — have returned to Myanmar.

In 2012, just a few weeks after a widely reported bout of organized violence against the Rohingya, I took part in a roundtable with Aung San Suu Kyi and Sir Geoffrey Nice, who led the prosecution of former Yugoslav dictator Slobodan Milosevic. At the time, Aung San Suu Kyi maintained a conspicuous silence on the subject. Nice subsequently wrote, “Suu Kyi should know that inactivity in the face of genocidal actions can carry moral, legal, and even criminal responsibility.”

Those words were printed one year before the military embarked on its 2017 ethnic cleansing campaign. Its genocidal purge included the physical destruction of at least 390 villages, including thousands of mosques, schools, clinics, warehouses, shops, village halls and homes.

Aung San Suu Kyi has now publicly flung open the floodgates of militant nationalism — a version as virulent as the anti-British nationalism of her father’s formative era in the 1930s and 1940s. This resistance to foreign rule often led to communal violence, since some ethnic nationalists viewed other groups as the beneficiaries of colonization.

As the International Criminal Court proceeds with its own separate investigation  into Myanmar’s crimes against the Rohingya, it is imperative that the prosecutor name Aung San Suu Kyi, along with the generals, as partners in crime. The international community must stand firm in holding her to account.