“This verdict is just the tip of the iceberg.” 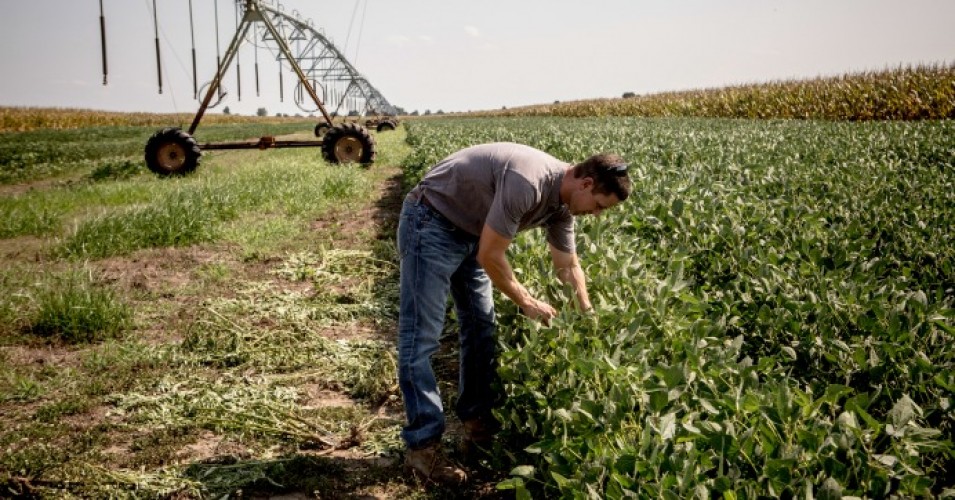 Brad Rose looks at rows of soybean plants that show signs of having been affected by Dicamba use on Aug 9, 2017. He doesn’t use it on his crops and he’s assured by neighbors within a mile and a half that they haven’t used it either. According to him, that means that the chemical had to travel about two miles to reach his crops. Dicamba, a weed killer that has been used for over 50 years, is now having a devastating impact in Arkansas and neighboring states because because the Monsanto is now selling new soybean and cotton varieties that have been genetically altered to tolerate dicamba.  (Photo: The Washington Post)

17 Feb 2020 – German chemicals giant Bayer announced today its intention to “swiftly appeal” a U.S. jury’s decision to award a Missouri peach farmer over $265 million in compensation for years of crop losses as a result of drifting dicamba weedkiller.

The legal challenge was the first dicamba suit to go to trial and was brought forth by Bill and Denise Bader, owners of Bader farms. Dicamba is produced by Monsanto, which Bayer acquired in 2018.

“Monsanto sold the seeds before the Environmental Protection Agency (EPA) approved the herbicides for market,” said the complaint.

The Baders, who did not use dicamba, said they lost over 30,000 trees due to Monsanto’s actions, as journlist Carey Gillam wrote earlier this month:

Bader claims Monsanto sold GMO dicamba-tolerant soybean and cotton seeds despite knowing the actions would trigger chemical damage to farm fields that were not planted with the new seeds. The intent, the Bader Farms’ lawsuit alleges, was to induce farmers to buy the specialty seeds as a means to prevent crop damage from herbicide drift coming from neighboring farmers who were planting the GMO crops and spraying them with dicamba.

Testing showed that leaves of his dying peach trees carried traces of dicamba. The 5,000-acre family farm, which produced 5 million to 6 million pounds of peaches annually along with corn, soybeans, various berries, apples, and tomatoes, is now struggling to survive, according to Bader.

The jury sided with Bader Farms on Friday and awarded them $15 million in damages, as St. Louis Public Radio reported:

Monsanto and BASF were found liable for negligent design of the products and negligent failure to warn regarding the products.  The jury also found that the two companies created a joint venture to manufacture and sell dicamba-resistant seed and low-volatility herbicides, and that they conspired to create an “ecological disaster” to increase profits.

The jury followed up Saturday with a determination that Monsanto and BASF pay $250 million in punitive damages.

The National Family Farm Coalition wondered if the verdict represented the “start of dicamba demise.”

In a Saturday tweet, the group called the decision a “victory for farmers which courts will hopefully uphold. Bayer bought #Monsanto with knowledge of these issues and should pay for #dicamba damage.”

“This verdict is just the tip of the iceberg — there is a long queue of farmers who have been impacted by dicamba drift and deserve their day in court,”

“The internal Monsanto (now Bayer) documents uncovered in this case show that the company released a highly destructive and intentionally untested product onto the market, and used its influence to cheat the regulatory system.”

“While farmers who don’t use the Xtend system are hit with crop damage and yield loss from dicamba drift, Bayer and BASF are reaping the financial gains of an increase in acreage planted to dicamba resistant soybeans, and an increase in use of dicamba formulations,” Wells continued. “Bader Farms’ victory in this case signals a turning tide, and opens opportunities for farmers to hold Bayer and BASF legally accountable for the dicamba drift crisis more broadly.”

As Bloomberg noted Monday, Bayer’s legal woes continue “in the face of a hurricane of lawsuits claiming that best-selling weed killer Roundup causes cancer,” over 140 cases related to dicamba, upcoming suits related to safety risks of its Essure birth control device, and challenges over PCB-contaminated waterways.