What Does the Myanmar Provisional Measures Order by the International Court of Justice Mean for ASEAN?

It is long overdue for ASEAN to sync its policies towards Myanmar with international opinion, legal and human rights, and the global public. 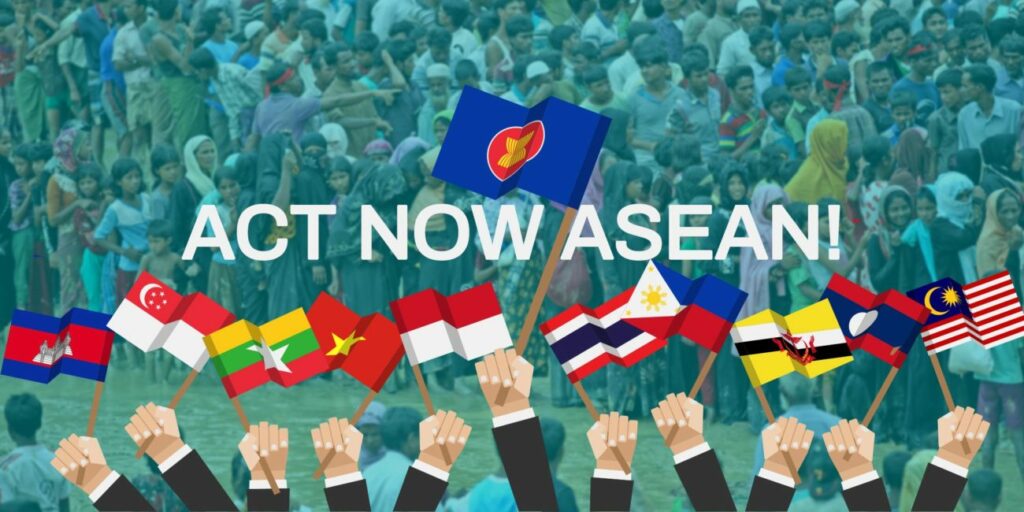 12 Feb 2020 – On January 23, 2020, the International Court of Justice, the UN’s highest judicial authority which handles legal disputes among the member states, announced its decision to proceed with The Gambia vs Myanmar and issued the provisional measures aimed at preventing (further) genocidal acts against Myanmar’s Rohingya people and at protecting the evidence of the past atrocities which Myanmar troops committed against the ethnic minority community in 2016 and 2017.

This is the 3rd application of the international treaty known as the Convention on the Prevention and Punishment of the Crime of Genocide or Genocide Convention since the Convention was first adopted in 1948, following the Nazi Genocide.

Damningly, this twofold decision was unanimous among the 17-judges. It was also extraordinary in that the German judge, handpicked by Myanmar as its ad hoc judge, and the Chinese judge whose position was unsure – Beijing’s approach is to treat the Rohingya crisis as merely a bilateral humanitarian issue between Bangladesh and Myanmar ­– cast their votes with the rest of the judges.

Since the two bouts of organised violence in Myanmar’s Rakhine in 2012, ASEAN on its part has adopted a similarly humanitarian perspective to what has increasingly come to be viewed legally as international crimes against Rohingyas by Myanmar. In this, Malaysia has emerged as a principled and compassionate voice for the persecuted minority, notwithstanding certain policy shortcomings, (for instance, denial of educational access), as the single largest ASEAN host of Rohingyas – over 100,000.

The international human rights community – and the Rohingyas themselves – view ASEAN’s exclusively “humanitarian” approach to the crimes of Myanmar as nothing short of a whitewash for the well-documented and solemn crimes in international law including war crimes, crimes against humanity and genocide in Rakhine.

The ICJ’s decision last month to proceed with the case despite Myanmar Agent Aung San Suu Kyi’s official request to dismiss it was based significantly on the weight of the evidence which prima farci led the judges to conclude unanimously that there is a real plausibility that the court will in due course find that Myanmar commissioned the crime of genocide or certain acts of genocide when the merits of the case are examined.

The above-mentioned genocide plausibility established by the world’s highest court and the court’s order to institute the periodic reporting regime solely targeted at Myanmar while the case proceeds, and the issue of Myanmar’s compliance are issues which frontally challenge ASEAN’s policy orthodoxy of “Non-interference”.  It calls into question the business-as-usual approach by the group as a bloc as well as respective policies of the individual member states.

Worse still, ASEAN states such as Singapore have taken advantage of this founding principle by investing most heavily in Myanmar – the city-state is now the largest foreign investor in Myanmar – while in effect serving as Myanmar’s public relations platform for genocide denials by its senior most leaders including Aung San Suu Kyi. As a matter of fact, Singapore’s role in propping up and defending the criminal Burmese leadership predated the genocidal purge of 2016 and 2017. Myanmar’s former chief of military intelligence and Prime Minister ex-general Khin Nyunt thanked the late Lee Kwan Yew for the strategic advice the latter offered on how to improve the Myanmar regime’s negative image, in the 40-minutes Al Jazeera English documentary Exiled. 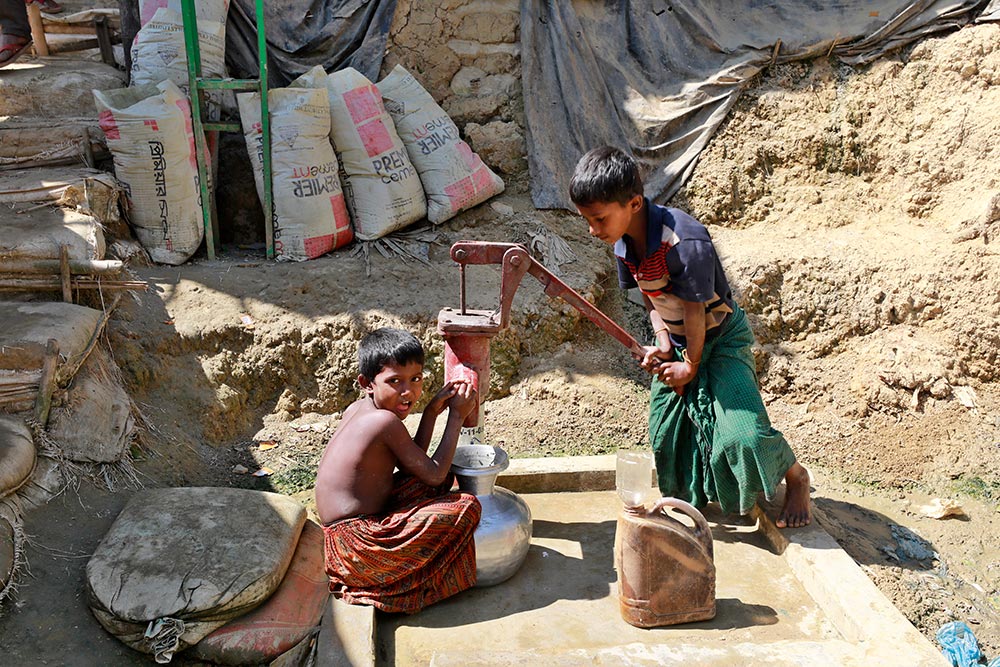 “They are forced to lead sub-human lives, with no freedom of movement, no prospect for third country resettlement, no Internet, no electricity, no proper schooling or livelihood opportunities.” Daily life of Rohingya refugees at Balukhali Camp in Cox’s Bazar, Bangladesh on February 02, 2019.
Photo: Sk Hasan Ali / Shutterstock.com

Meanwhile, Rohingya survivors in deplorable subhuman conditions in the camps in Bangladesh – estimated at 1 million including both the new arrivals from the 2016 and 2017 waves, and the generation left from the earlier waves between 1992 and 1995 – continue their attempts to reach third countries, particularly Malaysia. As recently as this week, a Malaysia-bound boat carrying 125 Rohingya refugees including women and children capsized in the Bay of Bengal killing at least 16.

Myanmar’s persecution of Rohingya people is not a product of the country’s democratic transition nor is it a “communal violence or conflict” between the Buddhists in Rakhine and primarily Muslim Rohingya community. These early spins to help cover up the systematic and intentional destruction of the Rohingyas have been proven to be untrue by the turn of events over the last 8 years.

Myanmar’s disenfranchisement, denial of their right to a nationality, displacement and large-scale deportation of the Rohingya minority are now a well-documented institutionalised policy of ethnic group persecution. The policy has resulted in a devastating impact on the Rohingya community, which the ICJ explicitly stated in its 28-page decision last month as a protected group under the Genocide Convention.

In its final report to the United Nations in 2019, the UN-mandated International Independent Fact-Finding Mission officially warned against the possibility of recurring genocide against the group. There are an estimated half-million Rohingyas trapped inside Myanmar’s Rakhine state where 100,000 have remained locked up in the so-called Internally Displaced Persons camps since 2012, ostensibly for their own protection. It bears pointing out that the Nazis rounded up their Jewish victims and put them in camps and ghettos under the banner of “protective custody”.

The rest of the Rohingyas – about 400,000 to 500,000 – are languishing in the apartheid conditions in what Rohingya residents themselves describe as “vast open prisons”, not unlike the conditions of the Palestinians trapped in Gaza and West Bank.

As ordered by the ICJ, Myanmar will be submitting the initial report in the last week of May – 4 months from the date of the ICJ order on 23 January. It is widely expected that Myanmar will not comply with the court’s order in good faith: it will manipulate the absence of specificities in the ICJ order in terms of protecting Rohingyas and preventing genocidal acts, for instance, incitement to further attacks.

Concurrently, the International Criminal Court has officially embarked on the full investigation of Myanmar’s crimes against Rohingyas. And the Myanmar government of Aung San Suu Kyi has remained defiant against the ICC’s calls for cooperation over the criminal court’s official investigation.

In light of these ground-breaking developments within the international accountability mechanisms at both the ICJ and ICC, concerned states within the ASEAN region – particularly Malaysia need to provide the much-needed push for the bloc to discuss the implications of the ICJ ruling. Even Myanmar leadership evidently knows that the blanket denial of the international crimes has zero credibility when it made a rare admission of its crimes a week before the ICJ ruling. Suu Kyi Government’s official Independent Commission of Enquiry revealed its new legal and media narrative: yes, war crimes may have been committed by Myanmar against Rohingyas but no evidence of genocide was found.

The January 23 ICJ order was anchored in the court’s unanimous opinion about the genocide plausibility in Myanmar. It is, in effect. a blow to ASEAN’s sacrosanct principle of “non-interference” and the disingenuous framing of the persecution and destruction of Rohingya.

In addition, ASEAN ought to be concerned about a parallel development within the global accountability space. The International Criminal Court has embarked on its full investigation of crimes against humanity and other associated crimes plausibly committed by Myanmar. Although Myanmar is not a signatory to the Rome Statute which midwifed the ICC and has repeatedly dismissed any claim of ICC’s juridical authority over its conduct, the ICC has established the extended jurisdiction over Myanmar’s violent treatment of Rohingyas, 730,000 that were deported in 2017 alone onto the soil of a state that is a party to the Rome Statute.

Malaysia has also felt the direct impact of Myanmar’s crimes as it is forced to host over 100,000 Rohingya refugees with no prospect for third country resettlement or repatriation back to their homeland of Western Myanmar.

It is long overdue for ASEAN to sync its policies towards Myanmar with the international opinion, legal, human rights and global public.

ASEAN needs to prove that it is a part of the solution, rather than being a Bystander in yet another genocide in its backyard after Khmer Rouge genocide four decades ago.