The Final Chapter Has Still Not Been Written: Remembering the 2004 Coup in Haiti 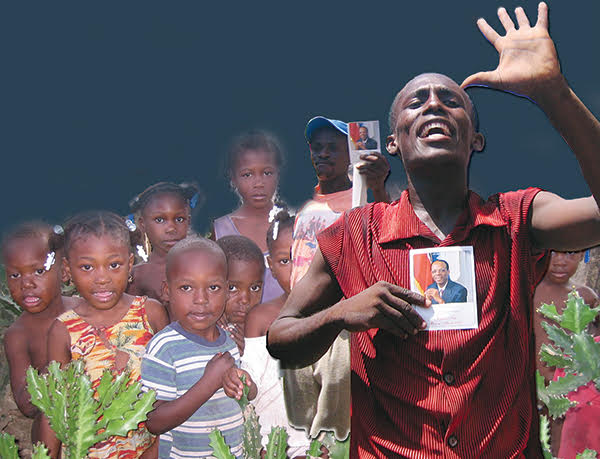 On February 29, 2004, the democratically elected government of President Jean-Bertrand Aristide of Haiti was overthrown by a violent coup.  This was the second U.S.-sponsored coup against a popularly elected Aristide government, the first one taking place in 1991 after he had served only eight months in office.

Orchestrated by the United States, France and Canada, and then sanctioned and enforced by a United Nations military occupation, the 2004 coup forced President Aristide, his wife and colleague, Mildred Trouillot Aristide, and their two children into exile, and removed more than 8,000 elected officials. Thousands more were killed, raped or forced to flee their homes.  The country has still not recovered.

The coup shattered the work of the most progressive government in Haiti’s history.  In the period of governance by Fanmi Lavalas, the party founded by President Aristide, more schools were built than the total constructed between 1804 and 1994. Twenty percent of the country’s budget was mandated for education.  Women’s groups and popular organizations helped coordinate a literacy campaign that brought over 320,000 people, mostly women, into literacy classes in over 20,000 literacy centers. The minimum wage was doubled. A powerful initiative was undertaken to combat the spread of HIV/AIDS.  Health clinics were established in the poorest communities.  The government also launched an aggressive campaign to collect unpaid taxes owed by the wealthy elite.  Aristide disbanded the notorious Haitian military, and empowered women’s and victims’ groups to bring cases against the military for its use of rape as a political weapon.

In the months after the 2004 coup, hundreds of thousands of Haitians courageously demonstrated their support for Aristide and his Fanmi Lavalas political party, raising five fingers in a dramatic call for him to complete his five year term. Their resistance has never stopped.

The current upheaval in Haiti stands as a sharp rebuke to those who plotted and carried out the coup in 2004.  The value of the gourde has plunged, the price of gasoline and kerosene (used for lamps and cooking in most Haitian homes) has soared, food insecurity has spiked, and the current president, Jovenel Moise, now rules by decree.  He and his PHTK party have overseen the theft of more than 4 billion dollars from Venezuela’s Petrocaribe program, in which Haiti was able to purchase oil from Venezuela at a discount and then sell it at market price.  The resulting funds were to be targeted for infrastructure, health care, and education; instead, billions ended up “missing” or in the overseas bank accounts of government officials. The despised Haitian Army has been reconstituted, readying itself to commit yet more human rights violations.

Add to this a wave of kidnappings and insecurity that has staggered the nation. When kidnappers killed a teenager on February 8th, thousands of students and community members chanting “Down With Kidnapping” took to the streets to denounce the lack of government action or accountability.  As the government prepared for Mardi Gras festivities in the midst of this crisis, demonstrators showed their indignation by destroying stands set up for the celebrations as police fired tear gas into the crowds. One 34-year old man summed up the mood of the protest: “We are not going to stop. Jovenel has to leave office, the country is not moving anywhere…Look around, it’s nothing but guns and people being kidnapped.”

When mainstream media reports reference the crisis in Haiti, they most often reduce the issue to one of “gang violence” without pointing to the role of the Haitian government. The reality is that some members of Haiti’s government and its U.S.-trained police force have weaponized and directed criminal elements to terrorize communities, creating what are in essence death squads, and then some of these same groups kill, kidnap and rape with impunity.

One horrific example of this was the massacre that took place in the community of Lasalin — a stronghold of the Lavalas movement and a staging point for opposition demonstrations — in November 2018. Police and paramilitaries invaded the area and opened fire, killing and wounding hundreds of people, sexually assaulting and raping women, and forcing hundreds more to flee from their homes.   In a more recent case, in November 2019, a Haitian government functionary was reported to have offered a  $50,000 payment to organizations in the pro-Lavalas community of Bel Air if they would remove barricades and stop protests against the government. Ex-police officer Jimmy Cherizier (known as Barbeque throughout Haiti), who played a central role in the Lasalin massacre, then came to Bel Air and was said by witnesses to have warned activists that they had better meet the request. When people in Bel Air refused, heavily-armed men in masks shot up the area, burning homes and instituting a three day reign of terror.  Police ignored numerous requests for help from community members. At least three people were killed and many more injured.  No one has been called to account.

These crimes have taken place under the watch of the PHTK and the so-called Core Group — composed of the United States, the United Nations, Brazil, Canada, France, Germany, Spain, the European Union, and the Organization of American States — that controls Haiti’s political life.  Without the firm backing of this imperial network, called the “Core Gang” by Haitian activists, the Moise government would already have fallen as a result of popular outrage and years of persistent and massive demonstrations in which millions of Haitians have taken to the streets, braving police bullets, clubs and tear gas.

Nine years after President Aristide’s return from exile in March 2011, Fanmi Lavalas stands at the center of this sustained mass upsurge.  Despite all attempts to marginalize and destroy it through systematic repression and a series of fraudulent elections — deemed “electoral coups” by grassroots activists –Lavalas remains pivotal in the fight for fundamental, progressive change in Haiti.

The Lavalas movement has always stressed the concept of dignity.  The slogan of UNIFA, the university established by the Aristides in 2001, then shuttered during the coup and reestablished and reinvigorated upon their return is, “If you do not safeguard your dignity, your dignity will leave you.” On the 16th anniversary of the 2004 coup, it is clear that the dignity of the Haitian people is under attack, battered by a U.S.-sponsored regime that has made life unlivable and is overseeing the destruction of civil society.  Yet a dynamic resistance perseveres, birthed in the struggle to uproot the Duvalier dictatorships and steeled in the fight back against two coups, military occupation, stolen elections and terror.

As we commemorate this terrible day in Haitian history, we should remember that the final chapter in this story has not yet been written. And that our solidarity is more critical than ever.

For first-hand investigative reports on the Lasalin Massacre, see https://www.nlg.org/report-the-lasalin-massacre-and-the-human-rights-crisis-in-haiti/

To support the grassroots movement in Haiti, please donate to the Haiti Emergency Relief Fund at www.haitiemergencyrelief.org

Anticopyright: Editorials and articles originated on TMS may be freely reprinted, disseminated, translated and used as background material, provided an acknowledgement and link to the source, TMS: The Final Chapter Has Still Not Been Written: Remembering the 2004 Coup in Haiti, is included. Thank you.