Vigil for Peace in Yemen, a New Norm

27 Mar 2020 – For the past three years, several dozen New Yorkers have gathered each Saturday at Union Square, at 11:00 a.m. to vigil for peace in Yemen.

Now, however, due to the coronavirus, the vigil for peace is radically altered. Last week, in recognition of the city’s coming shelter in place program, participants were asked to hold individual vigils at their respective homes on the subsequent Saturday mornings. Normally, during the public vigils, one or more participants would provide updates on the humanitarian crisis in Yemen, the ongoing war, and U.S. complicity. As COVID-19 threatens to engulf war-torn Yemen, it is even more critical to raise awareness of how the war debilitates the country. 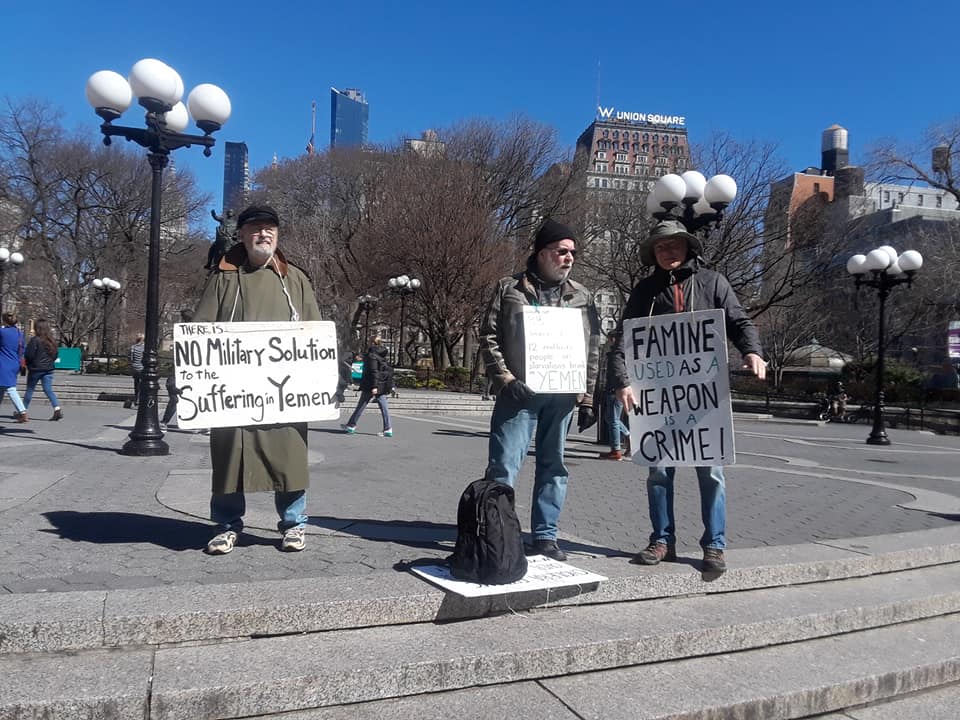 If the vigil for peace were to gather in Union Square this Saturday, activists most certainly would draw attention to how Turkish officials  indicted 20 Saudi nationals for the murder of the dissident writer, Jamal Khashoggi. Turkey’s investigation of the murder and dismemberment of Mr. Khashoggi indicts 18 people for committing the murder and names two officials for incitement to murder. One of them, General Ahmad Al-Asiri, a close associate of the Kingdom of Saudi Arabia’s Crown Prince Mohammed bin Salman, was deputy chief of intelligence when Mr. Khashoggi was murdered.

Numerous news reports over the past five years establish a pattern of Mr. Al-Asiri responding to inquiries about Saudi-led coalition military attacks against Yemen civilians with misleading statements, outright denials and attempted cover-ups.

For example, On August 30th, 2015, according to Human Rights Watch, a Saudi coalition led airstrike attacked the Al-Sham Water Bottling Factory in the outskirts of Abs, in northern Yemen. The strike destroyed the factory and killed 14 workers, including three boys, and wounded 11 more.

Later on August 30, after the airstrike, Gen. Al-Asiri told Reuters that the plant was not a bottling factory, but rather a place where Houthis made explosive devices. However, all of the individuals Human Rights Watch interviewed concurred:

…that plant was being used to bottle water and was not used for any military purposes… A group of international journalists traveled to the site of the blast two days after it was hit and reported that they could not find evidence of any military targets in the area. They said that they carefully examined the site, and took photos and videos of piles of scorched plastic bottles melted together from the heat of the explosion. They could not find any evidence that the factory was being used for military purposes.

Meanwhile, Yemenis were desperately trying to contend with rising cases of cholera caused by shortages of clean water.

In October, 2015, when eyewitnesses declared a hospital in northern Yemen run by Doctors Without Borders was destroyed by Saudi-led coalition warplanes, Gen. Al-Asiri told Reuters coalition jets had been in action over Saada governorate but had not hit the hospital.

On August 15, 2016,  a Saudi-led bombing campaign again targeted a hospital in northern Yemen supported by Doctors Without Borders. 19 people were killed.

Yet Saudi officials continued to insist they struck military targets only. Commenting on the August 13 school attack, Gen. Al-Asiri said the dead children were evidence the Houthis were recruiting children as guards and fighters.

“We would have hoped,” General Al-Asiri said, that Doctors Without Borders “would take measures to stop the recruitment of children to fight in wars instead of crying over them in the media.”

In one of the deadliest attacks of the war, on October 8, 2016, the Saudi-led military coalition’s fighter jets repeatedly bombed a hall filled with mourners during a funeral for an official in the capital city of Sana. At least 140 people were killed and 550 more were wounded.

General Al-Asiri, still a spokesman for the Saudi-led coalition, suggested there were other causes for the blast and later reported the coalition had not carried out any strikes near the hall. But outraged U.N. officials, backed up by videos on social media, insisted that airstrikes had massacred the mourners.

The U.S. has steadily sided with Saudi Arabia, including supplying it with weapons, training its armed forces and covering for it in the United Nations Security Council. But “Defense One,” a U.S. news agency intending to provide news and analysis for national security leaders and stakeholders, recently issued a stinging rebuke to the Kingdom’s Crown Prince, Mohammed bin Salman. They denounced the “humanitarian abomination ushered by Riyadh’s war in Yemen,” and called his leadership “as destabilizing to the Middle East as its Iranian rival.” Defense One urged Washington to discontinue enabling “Riyadh’s most reckless behavior.”

Turkey’s indictment of 20 Saudi nationals for murder and their insistence that Mr. Al-Asiri bears responsibility may help move the court of public opinion to resist all support for the Kingdom’s ongoing war in Yemen.

Particularly now, with intense focus on U.S. health care, it’s timely to recognize that in the past five years U.S. supported Gulf Coalition airstrikes bombed Yemen’s health care facilities 83 times. As parents here care for children during school closures, they should be reminded that since December 13, 2018, eight Yemeni children have been killed or injured every single day. Most of the children killed were playing outdoors with their friends or were on their way to or from school. According to the Yemen Data Project, more than 18,400 civilians have been killed or injured by Saudi Arabia and its Gulf allies since the initial  bombing campaign in 2015.

U.S. national security leaders and stakeholders in war, as they shelter in place, have an extraordinary opportunity to set a new norm and link with the vigil for Peace in Yemen, virtually. And, some may even join Yale students on April 9, from sunrise to sunset, in their National Fast for Peace in Yemen. They invite us to pledge support for Doctors Without Borders and other relief groups in Yemen.

Anticopyright: Editorials and articles originated on TMS may be freely reprinted, disseminated, translated and used as background material, provided an acknowledgement and link to the source, TMS: Vigil for Peace in Yemen, a New Norm, is included. Thank you.