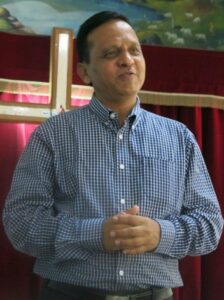 Central India has been one of the most fertile belts for several unique experiments undertaken by missionaries in the field of education and healthcare. The result is a network of several well-known schools, colleges and hospitals that have woven themselves into the social landscape of the region. They have also become a byword for quality and affordable services delivered to all sections of the society. These institutions are characterised by committed and compassionate staff driven by the selfless pursuit of improving the well-being of society. This is the reason why the region has nursed and nurtured so many eminent people who occupy high positions in varied fields across the country as well as beyond.

One of the fruits of this legacy is a more than century old iconic hospital that nestles in the heart of Nagpur city. Named as Mure Memorial Hospital after a British warrior who lost his life in a war while defending his country, it was made possible by a precious donation from the soldier’s two sisters who thought the best homage to their valiant brother was to set up a hospital.

The hospital remains wedded to its credo of delivering quality and affordable healthcare to low income populations. With commercialisation denuding society of its humanist content, this hospital is a veritable island of compassion for the sickly poor in a desert of hopelessness and despair. The hospital now finds its mission under strain as rising costs of equipment and medicines and dwindling funds pose daunting challenges.

The hospital has its genesis in Scotland. The Lord Provost William Henderson made an endowment to his daughter Dr. Agnes Henderson (born on 24 September 1865) in memory of his late wife to enable her to become a medical missionary.

In 1890, at the age of 25, Agnes Henderson arrived in Mumbai and stayed for six months to learn Marathi and to study health services in the city. 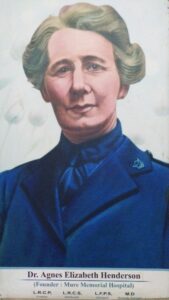 In 1891, Henderson started her work in Nagpur, then a small British village, with three Indian helpers, a dispenser and a woman interpreter. Ratnabai Stevenson from Tamil Nadu, was the first senior colleague of Henderson.

On 17 May 1896, the foundation stone was laid for Mure Memorial Hospital. Sir Andrew Henderson Leith Fraser who was the Chief Commissioner of Central Provinces at Nagpur, leased 12.75 acres of land at Sitabuldi, the current campus.

A generous donation of 2000 pounds was made by Helen & Mary Mure from Scotland in memory of their brother.

On 26 June 1896, the hospital became operational with 24 beds. Henderson shepherded her team through famine of 1896-97 saving many lives.

The foundation for the new hospital building was laid on March 2, 1985 and started functioning from January 15, 1987. What started as a small rural clinic has now branched out into a multi-specialty hospital. The infrastructure of the hospital includes general, semi-private and private wards, 8-bedded well equipped ICCU, 4 fully equipped Operation Theatres, 24-hours pharmacy and ambulance services.

The hospital has been stewarded in its long and successful journey of almost 125 years by 14 committed leaders who have zealously guarded the purity of its mission and its founding values. Its current director, Vilas Shende, who is heading it since June 2006, has all along devoted his life to the welfare of marginalized communities. He has been very actively involved in tribal rehabilitation work and has worked in tough geographical and social terrains. 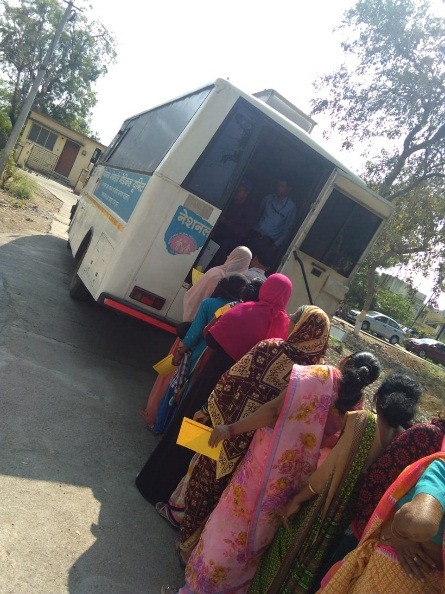 In 1897, Henderson and staff members began visiting the local villages for medical and missionary work, taking healthcare to the poor and marginalized. Her well known “Off to Camp” slogan later became the foundation for the community health activities of the hospital. The village work of the hospital was revived in 1970 under the leadership of Dr. S. N. Mukherji, the then Director. A base center was established at Shivangoan village, 13 kms from Nagpur, with 24-hour medical and delivery facilities. In addition to it, four sub-centres were established in different villages, each having an auxiliary nurse midwife and a social worker.

The Sure Start project for Mother and Child Health which was funded by PATH International reached out to 1,50,000 women and children and helped in increasing the institutional deliveries and decreasing the maternal and neonatal mortalities.

The hospital has an extensive community health outreach program. It has been organising medical camp and home /area visits for promoting awareness among local people. 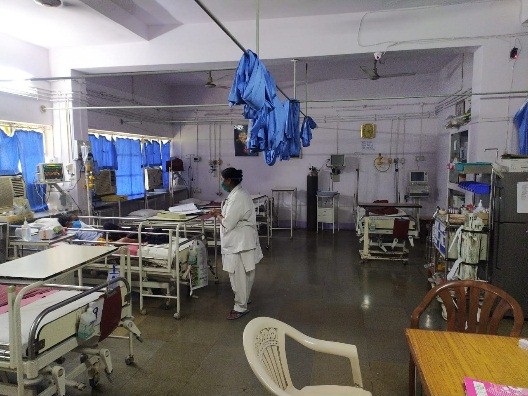 Mobile Medical Unit was set up under National Health Mission in 2011. Its aim is to reach those people who cannot afford medical treatment, and also to reduce infant and mother mortality rates in these areas. It operates in 47 different rural blocks which are spread over 60 to 150 kilometres away from Nagpur and caters to people who lack access to basic healthcare. 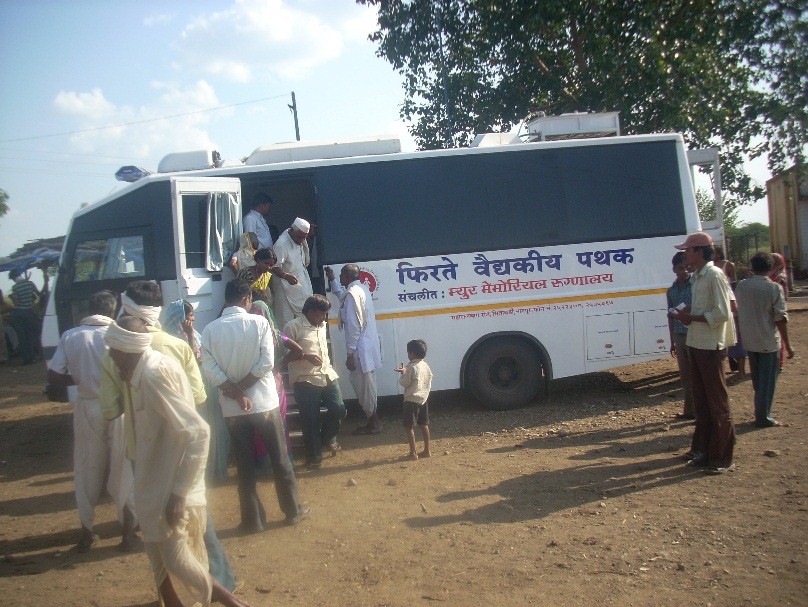 Helen Home for Aged was started in 2008 by Rev. Victor Anglo, for rehabilitating the elderly who do not have a stable home. The hospital offers both medical and emotional support to them.

This centre is a joint venture of the hospital and Harvest Mission for Christ in India and provides support to HIV patients. It provides patients with emotional and spiritual tools to cope with the painful misery. The patients gather every first and third Monday for prayer meeting where they share their experiences and their individual coping mechanism. The forum helps in emotional catharsis and builds mutual bonding and collective emotional resilience to face their ordeal. 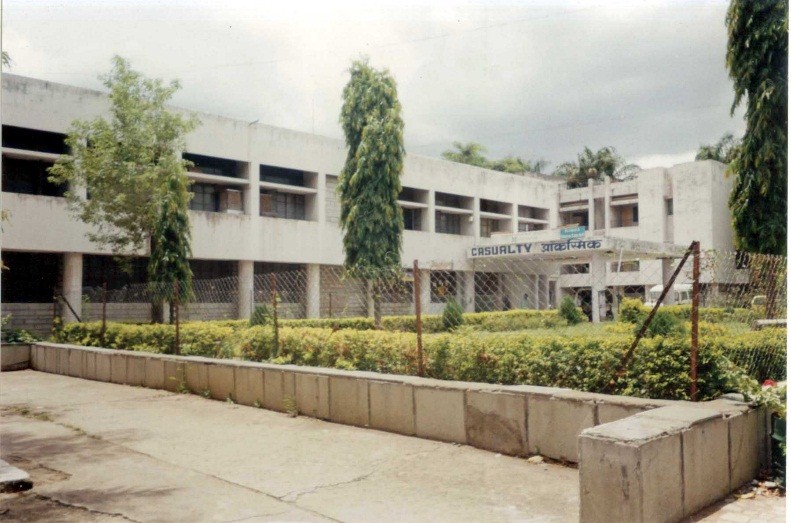 Hospitals like Mure Memorial are India’s most trusted allies and hope in its efforts at making universal healthcare a reality. But sadly such hospitals are also the last bastions against the marauding forces of commerce. These hospitals will need to reinvent their model – may be have a hybrid of philanthropy and business to sustain them. One of the prime causes of poverty is illness. Several medical tragedies are the number one route for poor families to bankruptcy. India’s public healthcare is in a dismal state and private healthcare is out of reach of most people. If we have to win the war against poverty, a sound healthcare system is the primary shield. It is in the nation’s interest that hospitals like Mure Memorial are renewed through committed partnership between the state and social investors and blended with the compassionate zeal of the missionaries.

Anticopyright: Editorials and articles originated on TMS may be freely reprinted, disseminated, translated and used as background material, provided an acknowledgement and link to the source, TMS: Celebrating the 125-Year-Old Legacy of Healthcare Work of Missionaries in Central India, is included. Thank you.