April 3, 2020 – Trident nuclear disarmament activist Steve Kelly, a Jesuit priest, begins his third year imprisoned in a county jail as he and his companions await sentencing.

On April 4, 2020, my friend Steve Kelly will begin a third year of imprisonment in Georgia’s Glynn County jail. He turned 70 while in prison, and while he has served multiple prison sentences for protesting nuclear weapons, spending two years in a county jail is unusual even for him. Yet he adamantly urges supporters to focus attention on the nuclear weapons arsenals which he and his companions aim to disarm. “The nukes are not going to go away by themselves,” says Steve.

The Kings Bay Plowshares 7 now await sentencing for their action, performed two years ago inside the Kings Bay Trident Submarine base in southern Georgia. They acted in concert with many others who take literally the Scriptural call to “beat swords into plowshares.”  Commenting on their case, Bill Quigley, a member of their legal team, told me “their actions speak louder than  their words and their words are very powerful.” Bill encourages us to remember each of them in our thoughts, prayers, and, hopefully, through our actions. “The legal system is not big enough for the hearts, minds and spirits of these folks,” he adds. “The legal system tries to concentrate all of this down to whether you cut a fence or sprayed some blood.” Bill believes we should instead look at the impending disaster nuclear weapons could cause, and the continuing disaster they do cause by wasting crucially needed resources to potentially destroy the planet.

“You’ve got eight numbers just like everybody else.” Jailers sometimes use this line to subdue or humiliate a prisoner who complains or seems to ask for special treatment. I learned this during a two-month stint in a Missouri county jail, (for planting corn on top of nuclear missile silo sites).

Once inside the prison system, your number is more useful to the Bureau of Prisons than your name, and you grow accustomed to responding when your number is called. The eight numbers help blur personalities and histories. 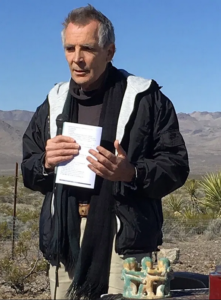 I think jailers have a hard time finding any instances when Steve Kelly tries to pull rank or claim extra privileges. He’s a well-educated Jesuit priest who has traveled the world. Outside the prison, he’d often be found walking alongside people who migrate from one difficult situation to the next, blending in, trying to help. Inside a jail or prison, he has often preferred solitary confinement to “general population” which requires obedience to all rules. The cramped confines of the Glynn County Jail don’t have a more punitive space in which to put him. Amid the jail’s crowded, noisy, unhealthy conditions, he uses his time remarkably well. I surmise this from reading his weekly post cards which are always humorous, thoughtful, and encouraging.

From his vantage point, amid people immiserated by poverty and mass incarceration systems, he yet sees the nuclear threat as the one that most endangers people. When “nuclear states” insist on superiority because they can menace non-nuclear states, a dangerous nationalism arises. Using arsenals to back up a fortress mentality undermines our capacity for international cooperation now massively needed to tackle the major problems we face. “You’ve got eight numbers just like everybody else” could point to a humbling yet helpful reminder that we are confined together on this planet and constrained by the prospect of real crises like the pandemic we’re now weathering.

I can recall walking through wet markets in far-away places and shuddering at the sight of slaughtered, bloody carcasses hanging from hooks in the open air. I imagine Steve would catch me, with a certain glance and nod, and ask what could be more savage and destructive than a lab creating nuclear weapons to incinerate people.

At the end of World War I, soldiers emerged from trenches in the front lines and felt puzzled by the silence. Realizing the terrifying, horrific explosions had ended, that the war was over, they didn’t clap or cheer. Exhausted, they slumped over their packs, awaiting migration back to their homes.

When the COVID-19 pandemic ends, global silence may be appropriate. A new biological threat will still be conceivable, one that could equal climate change and a nuclear meltdown or nuclear winter. Climate catastrophes could exacerbate our human immunological vulnerability. It’s grim to reckon with the potential for a new, mutated wave of coronavirus or another virus altogether to cause further sorrow and death.

We’ll all need to pick up our packs and go back to work, determined to be far better prepared for life saving actions as we move into an uncertain future. Ideally, nuclear weapon arsenals will be recognized as a crazed burden we must finally shed if we’ve any hope of surviving our past recklessness.

At some point, hopefully, my friend Steve Kelly will hear a voice over a loudspeaker telling him to pack his belongings. He’ll have survived this chapter of punishment. He won’t very likely be released, as there is a warrant for his arrest for a previous protest action, but he’ll carry a small pack beyond the confines of the Glynn County Jail. More importantly, he’ll carry the challenge to continue dedicating his life to ridding the world of nuclear weapons. In these challenging times, those eight numbers distinguish him as a fine and invaluable leader to follow.

Kathy Kelly is a member of the TRANSCEND Network for Peace Development Environment and a co-coordinator of Voices for Creative Nonviolence, which has long-standing roots in active nonviolent resistance to U.S. war-making. Begun in the summer of 2005, Voices draws from the experiences of those who challenged the brutal economic sanctions imposed by the U.S. and U.N. against the Iraqi people between 1990 and 2003. Members of Voices led over 70 delegations to Iraq to challenge the economic sanctions and were present in Baghdad in resistance the 2003 U.S. military invasion. Since 2009, Voices has led delegations to Afghanistan to listen and learn from nonviolent grassroots movements and to raise awareness about the negative impacts of U.S. militarism in the region. We are on the precipice of a full blown world war if one is not already under way. And we ask: what must our response be? And our answer- as tentative, grappling, searching and seeking as it may be- is that it falls upon us as citizens of the country initiating this world war to utilize all nonviolent means available to turn off war- to engage the electoral and legislative process, most definitely; to protest, of course; and to march and demonstrate. We must also move from protest to active nonviolent resistance. We must withdraw our collaboration and complicity with this system and use our bodies and lives as a means to bring the machinery of death to a grinding halt. Nonviolence cannot be a single day event- it must be a commitment we make and act upon every day of our lives.

Anticopyright: Editorials and articles originated on TMS may be freely reprinted, disseminated, translated and used as background material, provided an acknowledgement and link to the source, TMS: He’s Got Eight Numbers, Just like Everybody Else”, is included. Thank you.