A philosopher, a yogi, a linguist, a nationalist, a writer, a poet and a recognised spiritual person, these are some of the qualities of a person named Aurobindo (1872-1950) who was born in Calcutta, Bengal and died in the French colony of Pondicherry in South India.

Calcutta at that time was the capital of India but during summer months, it was difficult for the Britishers to adjust themselves to the torrid weather. They had built a hill station named Darjeeling which had a pleasant climate.

Aurobindo’s father was a surgeon. He was rich and ambitious and   sent his children including Aurobindo to study in the Loreto House Boarding School in Darjeeling to learn English and receive the best western education that was possible at that time. 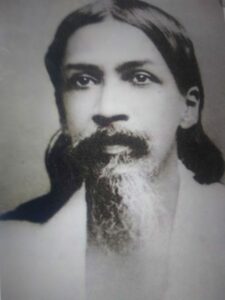 Afterwards in 1879, he sent him and his two brothers to England for acquiring western culture and education and learning several classical languages including Greek and Latin, apart from English, German, and French. Some years later it was said that Aurobindo knew 12 languages. These included apart from the classical western and modern ones such as English, French, German and Italian, Bengali, Sanskrit, Hindustani, Gujarati, Marathi, etc.

Aurobindo stayed for 13 years in England. His father wanted him to appear for the ICS-Indian Civil Service examination that was a prerequisite for working as a senior officer in India under British Rule. He passed the written examination but somehow, deep within his mind, there was a distaste for this type of service and he deliberately did not appear for the horse riding skills that were also essential for becoming an officer in India.

It was a lucky break for him to be invited by the Maharaja of Baroda (Gujarat) to work there. He left England in 1893. Unfortunately, his father died before Aurobindo could reach Baroda. There he worked sincerely and strenuously for the State and its people. He learnt the language Gujarati of the common people. He would also often go to Bengal to meet his relatives.

In 1906, he formally left Baroda to stay in Calcutta. There he met several people who were opposed to the British rule, and that resulted in his joining some resistance groups that worked for Indian independence. He also came in contact with several leading personalities such as Dadabhai Naoroji, Bal Gangadhar Tilak and others who were struggling for independence of India. He was even jailed in Alipore Prison for about a year on the charge that he was indulging in politically criminal activities. He was later acquitted and released from jail in 1909.

However, during his solitary confinement his views on life changed radically. He was drawn towards spirituality partly under the influence of Swami Vivekananda. In prison and afterwards he started learning Yoga, which brought in him an inner peace and quietness.

A year later in 1910, Aurobindo decided to move to Pondicherry in South India at the time a French colony. He and his colleague Mirra Alfisa, born in Paris in 1878 and who is generally known as The Mother, started an ashram in 1926 in Pondicherry that attracted a large number of followers in the years to come.

There he isolated himself from duties of running the ashram and continued with his spiritual quest and started writing on several philosophical topics and on Yoga. His major works include Life Divine, Letters on Gita, and The Hour of God. He also corresponded extensively with his followers . There he added the prefix Sri (meaning Holy in Sanskrit language) to his name.

When Sri Aurobindo breathed his last in 1950, his death was condoled by several Indian leaders including the first Prime Minister of free India Jawaharlal Nehru and the first President Rajendra Prasad.

Such was Aurobindo’s image as a spiritual leader and a nationalist who was against the British rule that Mahatma Gandhi wanted to meet him in 1934 in Pondichery. But Aurobindo declined to meet Gandhi for two main reasons — Aurobindo’s strict adherence to spiritual isolation and secondly because he did not completely agree with Gandhi’s practice of Satyagraha and the latter’s method of struggling for independence from British rule. He felt that although the British yielded to an extent in the face of Satyagraha, the conditions of the poor and victimised people did not change for the better subsequently. This happened also at the time of partition of the country in August 1947, according to him.

A few years ago, I along with my wife had the unique opportunity of going to the Aurobindo Ashram. There we saw the samadhis of Aurobindo and the Mother. An unusual view could be seen — several people were present, many of whom were touching their heads on the samadhis. When we ascertained the reason for this, we were told that the people could sense the vibrations of the two departed spiritual souls. Their vibrations were giving their devotees a sense of peace, joy and harmony.

A museum of Aurobindo’s photographs, his books and other memorabilia are now being exhibited in a new museum named Auroville, a short distance away.

Truly a great personality, Sri Aurobindo attracts millions of followers for his devotion to spirituality, peace, bliss and harmony in the ashram in the town that is now renamed Puducherry.

“There are no true and false religions, but rather all religions are true in their own way and degree. Each is one of the thousand paths to the One Eternal.”

“Others boast of their love for God. My boast is that I did not love God; it was He who loved me and sought me out and forced me to belong to Him.”

Anticopyright: Editorials and articles originated on TMS may be freely reprinted, disseminated, translated and used as background material, provided an acknowledgement and link to the source, TMS: Sri Aurobindo — Philosopher, Nationalist, Spiritual Leader, is included. Thank you.