22 Jul 2020 – It’s hard to know exactly where the Trump Administration found the inspiration for its newest set of draconian asylum rules. Might it have been a National Geographic special where a giant anaconda encircles its prey, squeezes it to death, and then swallows it whole? Or perhaps a late-night, B-grade horror film in which some evil mastermind drowns his victims by slowly filling a sealed room with water? Regardless, these proposed changes cannot camouflage the racism, xenophobia, and nativist politics behind them. We’ve seen the Muslim travel ban, the attempted rescission of the Deferred Action for Childhood Arrivals (DACA) program, and the terrorizing of communities by Immigration and Customs Enforcement (ICE) agents. Now we’re witnessing an assault designed to suffocate the hopes and life prospects of asylum seekers. 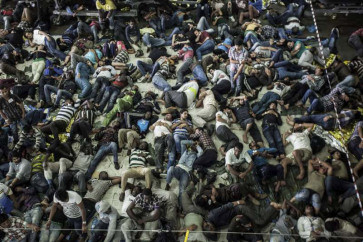 Asylum-seekers and economic migrants take to the seas, waiting out the dangerous journey in the boat’s cramped cargo space.
Photo: UNHCR/A. D’Amato

The changes under consideration would upend the decades-old and internationally embraced standards of the Refugee Act of 1980, created to protect refugees who have a “well-founded fear of persecution on account of race, religion, nationality, membership in a particular social group, or political opinion.” Despite the frequent misleading and malicious characterizations from the White House, with rare exceptions asylum seekers leave their homes with few resources other than the keen determination to endure the risks, hurdles, and hardships they inevitably face in reaching and living in the United States. But their motivation is simple: failing to do so is quite possibly the prelude to grievous harm and even death in their country of origin.

Consider several representative cases: a Cameroonian man tortured for exposing government corruption; a Guatemalan woman repeatedly beaten and raped by her gang member husband; a gay man from Afghanistan at risk of execution for his sexual orientation; a political dissident who fled detention in Eritrea; or a Mexican family whose sons are being recruited by the drug cartels. Sadly, these accounts are not unusual. But escaping such dire circumstances will become exceedingly difficult if the Department of Justice and Department of Homeland Security move forward with plans to adopt a much narrower definition of who’s eligible for asylum in the U.S. Moreover, with these proposed rule changes every asylum seeker not thoroughly versed in our immigration laws will face increasingly insurmountable odds when it comes to meeting the revised and deliberately impenetrable application and screening requirements.

Ever since the election four years ago, Trump Administration officials have worked overtime to undermine the longstanding view of the United States as, in John F. Kennedy’s words, a “nation of immigrants.” Much of that effort has involved portraying those seeking entry into this country—including asylum applicants fleeing persecution—in starkly negative terms meant to discourage our compassion toward them. With manipulative psychological appeals contrived to confuse and divide us, we’ve been told that immigration imperils our security; that wall-building, cages, and other punitive measures are all ways to fight injustice; that men, women, and children who want to enter the U.S. are devious and different; that cracking down on immigration is a necessary step in the pursuit of national greatness; and that unless we block entry we’ll lose control over our country’s future. Such claims are readily debunked, but their skillful packaging regrettably draws adherents nonetheless.

During the recently concluded public comment period for these proposed new rules on asylum, tens of thousands of comments were submitted by concerned citizens, human rights organizations, former immigration judges, faith-based groups, medical humanitarian organizations, legal rights groups, and others. From a diversity of backgrounds, they offer a unifying message: immigrants strengthen our communities and we must never become numb to the pain and suffering of others. At the same time, we’re also reminded that the real Boogeyman—heartless and eager to destroy what’s best about America—isn’t lurking at our border. He’s sitting in the Oval Office.

Anticopyright: Editorials and articles originated on TMS may be freely reprinted, disseminated, translated and used as background material, provided an acknowledgement and link to the source, TMS: Asylum, Now an American Horror Story, is included. Thank you.