Education for Peace and Geopolitics 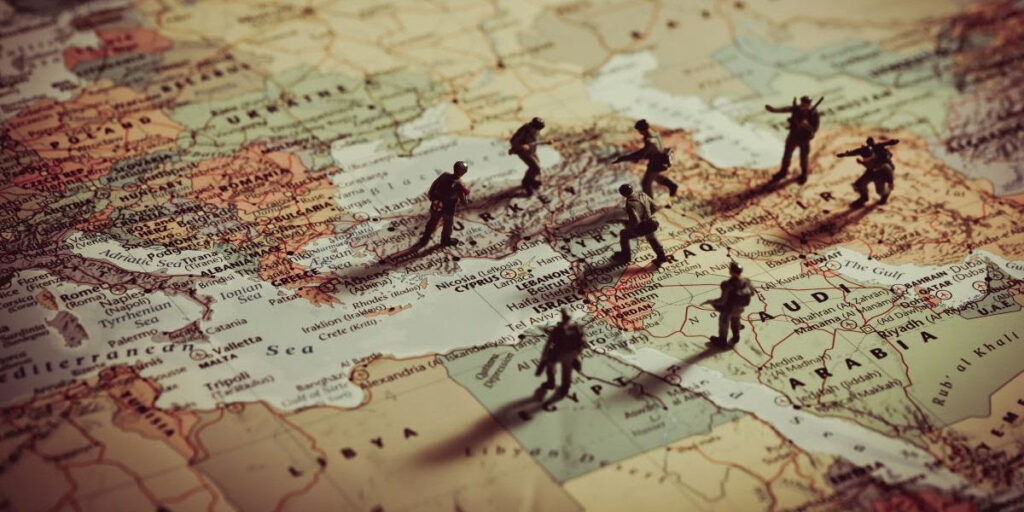 60 years of peace theory and peace practice can be summarized in:

Any true education should prepare for practice, guided by general theory.

Moving from denominator right to numerator left, this means:

Mediation is verbal, based on dialogues with the parties, but the four tasks are very concrete, practical.  For doers not only talkers; for practical people like officers.  Hence the Big Question:

Is peace theory-practice-education compatible with the military mind–however defined, and there are many military cultures in the world–or not?

Thinkers so diverse as Nietzsche and Gandhi saw the military as exemplary because of the ésprit de corps and willingness to sacrifice, even their own lives.  For Gandhi the kshatriya (military) caste was a model: he wanted non-violent warriors, with the same perseverance, also indispensable in mediation. Advance, but secure the retreat, has a mediation parallel: do not propose any solution, any action that cannot be reversed.  However well intended, you may be wrong.

The leading military genius of the last century: Vo Nguyen Giap, a historian who just passed away in Hanoi at the age of 102. In late 1989 I had a long conversation with “mon général” about the victory over the French, then the Americans, and a draw with the Chinese.  His answer: against the Vietnamese an enemy has to fight the whole population, not only “military age males”; against Vietnam an enemy has to conquer every self-sufficient part, no domino effect from a “capital” only; and Vietnamese history is 2000 years of training with the Chinese.  Well, he had to coordinate all that; ending with much peace.

Second Big Question: is peace compatible with the civilizations?

Problematic for a West that colonized the world and for US global hegemony; problematic for all empires, including the Soviet and the han Chinese to their neighbors.  And for Japan slow on reconciliation.  Less for Islam–islamism can be seen as defensive against Western secularism. And much less for buddhism, except as state religion. But states, except for the largest, are declining in salience, so is blind patriotism willing to fight any war. Still problematic is a West and USA, seeing itself as too superior, exceptional for civilization dialogues among equals. They will learn; the alternative is isolation.

Like military, mediators think in terms of the intentions, capabilities and circumstances for all parties, adding to violent behavior and attitudes of hatred the incompatibilities between their values and interests; goals, in short.  Our experience: there is no party without some legitimate value or interest; even if it collides with somebody else’s, our own for instance.  Build on it, creatively.

The mediation road passes via the search for some minimum changes in reality so that the legitimate goals of all parties are reasonably met for better relations; the military road often passes through a maximum change in the other party–death–so that he gives up his pursuit of goals standing in our way.  Mediators try to connect, to bridge the good on all sides; the military mind may try to force incapacitation in the other. A key problem: mediators build on the good, legitimate in all parties, searching for new bridges, to cement relations. However, military bullets are not smart enough to hit only the bad and save the good. They kill the whole person; irreversibly, by the way.  Hence, if some violence is deemed indispensable, make it non-lethal, please.

Yet more recently the military has also stood in-between to prevent killing, keeping peace. Peacekeeping bridges mediation and military mindsets, all civilizations being in it.  A great learning experience.

Add police, nonviolence, mediation skills to the military expertise; make them so numerous as to constitute a blue carpet between the parties not only blue caps; 50 percent women, add nurses, doctors, food delivery, add humanitarian components to the R2P. But all such skills have to be taught and trained and learned; the skills are not innate.

Now, a second look at the formula in view of the above.

Peace is based on equitable, relatively horizontal, relations. Can a traditional vertical army be good at that? The question underestimates the huge amount of horizontal military cooperation; between allies, branches of the forces, commanders at the same level, between rank and file soldiers; in real crisis between all of them.

Peace is based on empathy, deep understanding of all parties. Sun Tzu made this a basic part of the military mind; what is new would be the search for strengths, the good, rather than for weaknesses, the bad, in others–and the other way around for oneself. Very similar.

Peace is based on reconciliation, on clearing the past, on building a future. Recent experience points to veterans on both sides being better at this than politicians, sharing how it looked from the other side, questioning the wisdom of the war. Veterans, go ahead!

Peace is based on identifying the underlying conflict, searching for solutions rather than engaging, taking on the other side in a violent search for victory. Solution-orientation rather than victory-orientation. But in this there is also victory; of peace over war. The military on all sides could engage in dialogue about the problem in a joint search for solutions rather than in violent encounters. The enemy may not be the other side but the idea of an enemy. There are gaps, but they are not unbridgeable. Dedication is needed, added to skills and knowledge, training; very well known to the military.

The UN has opened for the same person to wear two caps: a blue UN beret, and the helmet of his own army.  Generals: we are on the way.

Anticopyright: Editorials and articles originated on TMS may be freely reprinted, disseminated, translated and used as background material, provided an acknowledgement and link to the source, TMS: Education for Peace and Geopolitics, is included. Thank you.

5 Responses to “Education for Peace and Geopolitics”