The Principle of Nonviolence: A Philosophical Path

The Principle of Nonviolence: A Philosophical Path, by Jean-Marie Muller, Honolulu: Center for Global Nonkilling, pp. 273 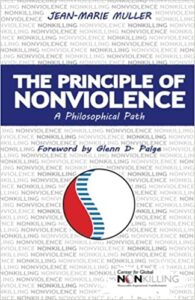 This English translation of Le principe de non-violence: Parcours philosophique by French philosopher -writer-activist is a rare book commissioned by the Center for Global Nonkilling (CGNK).  CGNK founder Glenn D. Paige decided the translation was important as the ethic of “nonkilling” underlies all discussions of nonviolence in the text.

Muller notes that we as citizens today do not keep enough distance from the events happening before our eyes in real time anymore.

“Without this distance, there is no more space for thought. The mass media does not inform us of the reasons and stakes of violence, but of the violence itself. It does not arouse public opinion, but public emotion.”

The goal of the book is to seek a philosophical concept of nonviolence; it challenges all ideology that violence is necessary, legitimate and honorable.

Muller’s work with detailed references and index, takes the reader into the world of conflict, followed by thoughtful reflection on violence, provides an insightful discussion of Nonviolence as a philosophical imperative and principles of nonviolent action. It delves into how violence became a necessity, and the State a symbol of institutionalized violence. The possibility of nonviolence as a political requirement and a counterpoint to prevalent institutionalized killings is analyzed, as well as the nonviolent resolution of conflicts, including alternatives to war.

The last four chapters of the book are devoted to a discussion of causative history of violence and nonviolence, according to Eric Weil; and the shaping of nonviolence as a political requirement by Mahatma Gandhi.  Gandhi’s evolution as the pioneering architect of nonviolence is examined. His principled nonviolence has unique clarity:

“If India is to evolve towards democracy, there should be no compromise with violence or untruth.”

The concluding part of the book is a thoughtful discussion on the chances of a Culture of Nonviolence in the 21st Century.

Muller shows that violence is responded to with counter-violence, each leading to greater violence in order to defeat it.  He writes:

“Admittedly, in the short-term counter-violence can successfully put an end to the drive of opposing violence, and have us believe that we have gained a victory. But in reality, the victory is likely to be illusory, for we have ultimately reinforced violence’s hold over history; we have contributed to confining history to the logic of violence, we have made violence a necessity.”

There is no end to nonviolent imagination and creativity. Violence has been constrained by its own perverse logic in its inability to find possibilities for conflict transformation.

“To resort to counter-violence in the struggle against violence increases the risk of stretching the string of violent acts indefinitely”.

“The violence/nonviolence combination aims to break that string. Of course nonviolent action also seeks to interrupt the effects of violence, but it starts by attempting to fight against its causes.  Rather than seeking to hold back the torrent, one should seek to dry up its spring.”

An erudite work with rich discussions on the relevance of nonviolence in western political thought, politics, and social psychology.

The PDF file can be downloaded for free HERE.

Anticopyright: Editorials and articles originated on TMS may be freely reprinted, disseminated, translated and used as background material, provided an acknowledgement and link to the source, TMS: The Principle of Nonviolence: A Philosophical Path, is included. Thank you.