Wait, How Much Microplastic Is Swirling in the Atlantic?

Scientists calculate that the top 200 meters of ocean alone contains up to 21 million metric tons of plastic. And that wasn’t even counting microfibers. 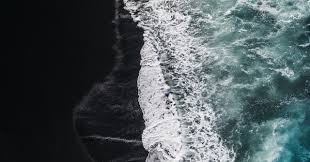 18 Aug 2020 – Scientists reckon that something like 99 percent of the plastic that should be out in the environment is missing—that is, given what we know about the rates of pollution, it should be more conspicuous. But instead, all that trash seemingly disappears when it reaches the oceans. So over the past few years, researchers have been piecing together at least part of the answer to this mystery: The trash isn’t vanishing, it’s simply getting ground down and dispersed in the sea. Macroplastics like bags and bottles are breaking into microplastics (defined as bits less than 5 millimeters long) that swirl in the water column and sink down to the seafloor.

Writing today in the journal Nature Communications, scientists from the National Oceanography Centre in the United Kingdom say they can account for that missing plastic, and in the process reveal the stunning scale of the microplastic pollution problem. Sampling 12 sites in the middle of the Atlantic between the UK and the Falkland Islands, they calculate that between 12 and 21 million metric tons of microplastic pack into just the top 200 meters of that ocean. In a single cubic meter of seawater, they found up to 7,000 plastic particles. And they were searching just a tiny fraction of an ocean that can be over 5 miles deep for only the three most common types of plastic—polyethylene, polypropylene and polystyrene. That means the total microplastic count in the Atlantic is likely to be far higher.

“This is one of the messages of the paper, because we only looked at three polymers within a very limited sized range, and within just 6 percent of the Atlantic Ocean,” says Katsiaryna Pabortsava, an oceanographer at the National Oceanography Centre and a coauthor on the paper. Extrapolate these microplastic tallies and you start to build a picture of an ocean positively corrupted with synthetic particles.

This research is part of a larger effort among environmental scientists to sketch out the “microplastic cycle,” or how the tiny particles move between land and sea and air. So far, the results have been troubling, to say the least. While scientists used to think microplastics stayed in the ocean, which acts like a kind of sink, they recently showed that seawater burps up particles that then blow onto land, and likely into our lungs. Wind is also scouring cities and carrying microplastics into the atmosphere. Then the particles can fall as plastic rain into protected areas downwind.

In the oceans, the big question is how the water’s natural processes are moving microplastics around the world, as well as up and down the water column. Earlier this year, researchers showed how deep-sea currents transport the particles and spit them out on the seafloor, tainting ecosystems. Last year, another group of scientists found that baby fish are mistaking microplastics for food. The food chain might act as a sort of ecological transport for the particles: Bigger fish eat baby fish, and still bigger fish eat those predators, and so on up the line. If microplastics are bioaccumulating in the seafoods we eat, that could be a human health concern; indeed scientists have found that commonly consumed species like oysters and sardines are loaded with plastic.

This new research concludes that the top 200 meters of the Atlantic Ocean are positively packed with microplastics, with serious implications for the rest of the water column. For instance, microplastic particles are known to accumulate a biofilm of organic matter as they float around, which could weigh them down until they fall to the sea floor. This means that the plastics don’t stay at the top of the ocean—they have a chance of raining down into ocean ecosystems at all depths. “Another mechanism is plastic particles can be mistaken for food, and organisms at the very bottom of the food chain will be consuming it,” says Pabortsava. “As they excrete the material, that fecal material is very dense and it sinks, carrying plastics all the way down.”

Pabortsava thinks that one of the reasons why the millions of metric tons of plastic bags and bottles that humanity unloads into the sea each year seem to disappear is due in part to sampling techniques. Pabortsava filtered down to a resolution of 25 micrometers (25 millionths of a meter). But because this field of research is so new, there isn’t a standardized technique both for the fineness of the filters used to collect the particles, and the methods for counting them in the lab. So one group of researchers might be counting smaller particles than another, giving them different quantifications of microplastics in a given part of the sea.

“The reason we previously were not able to account for about 99 percent of what we have been putting in,” says Pabortsava, “is either because we haven’t been collecting the right size of particles in the surface ocean, or because it actually fragments and is transported down below the surface as a result.”

By scaling up their counts of microplastics across those dozen sample sites, Pabortsava says they can account for all that missing plastic, and even revise that figure upwards. “Our small microplastics alone, with just those three polymer types, can actually balance the inputs for the past 65 years and even surpass it,” Pabortsava adds. That is, Pabortsava says that even more plastic might have flowed into the environment than scientists previously believed.

But hold up, says Jennifer Brandon, a researcher at the Scripps Institution of Oceanography, who studies microplastics but wasn’t involved with this research. “There are some big leaps in their calculations,” she writes in an email to WIRED. “One of the largest is that they took their transect that curves right through two subtropical gyres (the most densely polluted areas of the Atlantic Ocean) and extrapolated those numbers for the entire Atlantic Ocean. You can’t get an accurate number doing that: It’s like taking the eye of a hurricane and saying that that is what the whole hurricane’s pressure field is like.”

“There is a lot of variability even within the subtropical gyres in terms of plastic abundance,” Pabortsava agrees, and points out that their paper describes some regions holding less plastic than others. For example, in the Atlantic subtropical gyres, they found no increase in microplastic. But this is where larger objects like bags, the precursors of microplastics, tend to accumulate.

So, says Richard Lampitt, an oceanographer at the National Oceanography Centre and coauthor on the paper, those gyres might not be so loaded with microplastics. “There isn’t actually strong evidence that these are massive repositories for plastics,” he says. Also, he notes, he and Pabortsava sampled from 12 areas up and down the Atlantic. “That’s one of the great attractions, is that it was covering a wide variety of environments, not just looking at the coastal and not just again the subtropical gyres,” Lampitt says.

Brandon agrees that this was a very thorough microplastic sampling of the Atlantic Ocean, which has until now been undersampled. “Their overall points about smaller microplastics being incredibly abundant and undersampled are correct, and I would not be surprised if most plastics are in the top 200 meters of the ocean, based on the buoyancies of most consumer plastics,” she writes.

It’s also worth noting that Lampitt and Pabortsava were only counting microplastics—chunks and shards of plastic bags and bottles—not microfibers. These strands come mostly from synthetic fabrics like polyester, and they are a serious concern in the oceans: Small animals, for instance, might be mistaking them for food. When you do a load of laundry, some 100,000 microfibers shed from your clothes and flow to a wastewater treatment plant. But that facility can’t filter out all of the fibers, which flow out to sea as effluent. By one estimate, a city the size of Toronto flushes hundreds of billions of microfibers into the ocean each year.

So this research at the very least snaps in place a missing piece of the microplastic cycle puzzle: A whole lot of particles are swirling in the Atlantic, and scientists have already shown that to be the case in the Pacific as well: California’s Monterey Bay—a famous conservation success story—is loaded with the stuff. And again, this new research only looked at the top 200 meters of the Atlantic, and the researchers were only looking at a particular size range of particles, and they didn’t include a tally of microfibers. So the real concentration of microplastics in the ocean may be far higher than this paper’s range of 12 to 21 million metric tons.

“And we say, OK, so that’s a minimum estimate, isn’t it?” says Lampitt. “Because when you’re looking at this size category, we’re only looking at these plastics. And we still come up with a colossal figure. So that’s where the alarm bells really start ringing.”

Matt Simon is a science journalist at WIRED, where he covers biology, robotics, cannabis, and the environment. He’s also the author of Plight of the Living Dead: What Real-Life Zombies Reveal About Our World—And Ourselves, and The Wasp That Brainwashed the Caterpillar, which won an Alex Award.