People of many countries of Asia and Africa are suffering from hunger.  Sudan and South Sudan are poor countries with poverty and misery writ clearly on the face of many people of these two countries. They were one country but split into two in 2011 due to civil strife.

Sudan has a population of about 43 million while the smaller country of South Sudan with about 11 million is suffering from poverty, discrimination and misery. About half the population of S Sudan is groaning from acute pangs of hunger —  it is estimated that roughly 100 children are dying in this country everyday from this curse.

World Food day was observed on 16 October. Apart from several promises of how governments and some agencies should act to reduce worldwide hunger, some stark figures of hungry people in the world have emerged. Last year about 690 million people suffered from hunger, malnutrition and food insecurity. The COVID 19 pandemic has made the situation worse due to obvious facts — people being thrown out of work due to closure of industries, factories and agricultural distress.

World Food Programme (WFP) has won the Nobel Peace Prize for this year for its efforts at combating hunger all over the world by bringing food to millions of people who go to bed hungry and miserable. But its efforts are grossly insufficient keeping in view the dimensions of the hunger problem.

The problem of the suffering masses has become worse due to wastage and lack of proper storage of agricultural products. Many rich people of USA, Canada and others are wasting large portions of food that they cook and do not consume. Some European countries had earlier been reported to have allowed milk and some other commodities to be just thrown into rivers so as not to see a fall in their international prices.

We also know that some businesses hoard large quantities of wheat, rice and other items and release them to the market when the wholesale prices rise due to the creation of artificial shortages. In the process, many perishable items are lost but this does not concern the hoarders.

A cartoon depicting the Hunger Index of these countries has been published in a newspaper of India, and is included in this essay.

Just to give an example of rising food prices, potato which is a staple item in the kitchens of people, has shown an upward trend of prices of about 50 percent in Delhi in the last two months.

Although food prices are shooting upward, the conditions of average farmers are poor and several farmers are giving up their traditional occupation. The Prime Minister of India had about a fortnight back, got some laws passed in the Indian Parliament where the farmer is required to get a minimum support price (MSP)  for his agriculture produce. Unfortunately, politics overshadows these laws and there are protests and agitations by some opposition political parties with the support of a section of farmers.

What are possible solutions to the problem of hunger and malnutrition? Not being an economist, I cannot suggest any specific means but there is no doubt that the neo – economic system that is prevalent in the world adds to the problem. Some people in rich western countries not only overeat but also waste a lot of food. They have little idea of the conditions of the poor people across the globe.

Even in some large cities of India, people will feed bananas more to monkeys than to poor children walking nearby and begging at the traffic signals. In fact there is an irony when some children are reported at saying,

“It would have been better if we were monkeys — at least we would get bananas to quench our hunger.”

This year’s theme on the World Food Day is

It calls on people to grow more food, build proper systems of distribution and storage so people especially children can live together in peace and avoid hunger and malnutrition.

The message is loud and clear. Many governments, NGOs and other organisations are working towards this noble theme. Let us also individually work against hunger and malnutrition, and towards humanity and peace. 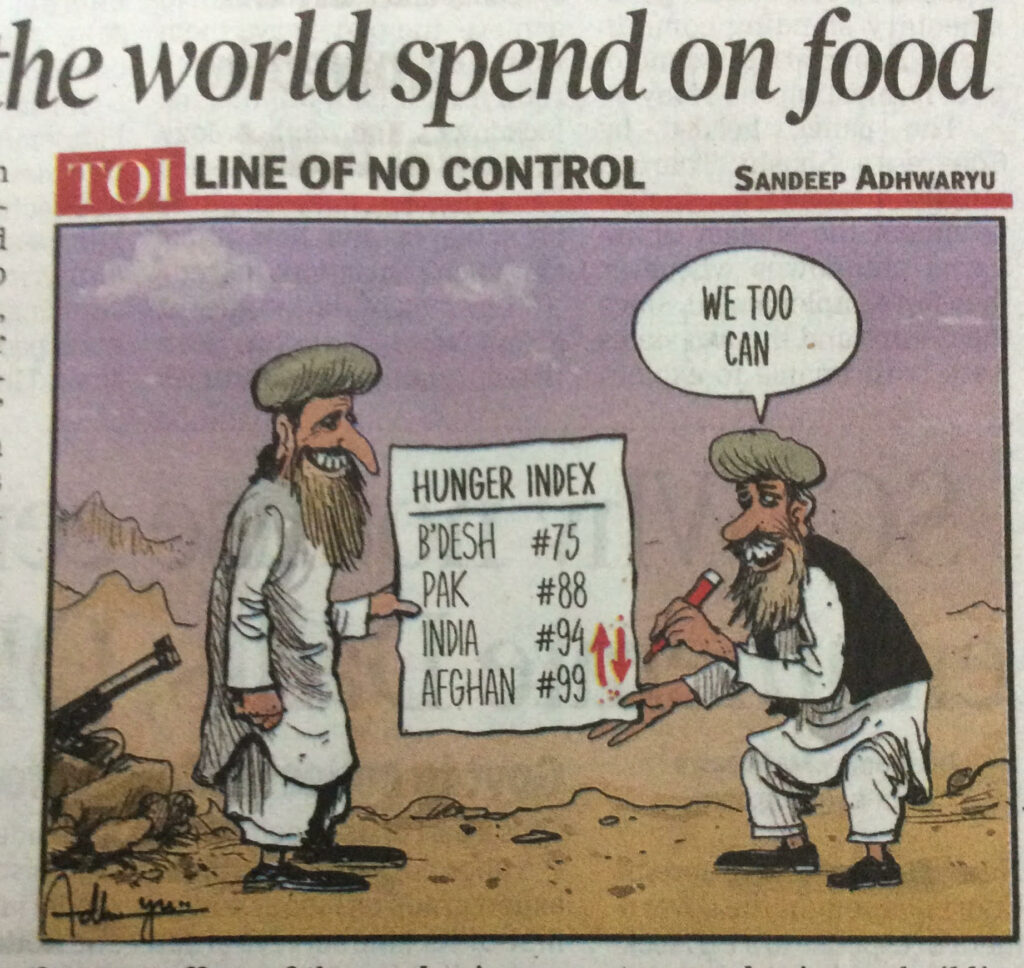 Anticopyright: Editorials and articles originated on TMS may be freely reprinted, disseminated, translated and used as background material, provided an acknowledgement and link to the source, TMS: STOP HUNGER — Multi-Pronged Dimensions, is included. Thank you.