US Presidential Campaign Spectacle: Distracts from Essential Issues while Playing the Race Card

20 Oct 2020 – With the seemingly interminable US presidential campaign season mercifully drawing to a close, the buzz is about a possible coup. That would make the US one of the few countries in recent history to experience regime change not masterminded by a US embassy, because there is no US embassy in Washington.

There are other reasons why a coup is unlikely. Namely, most of the politically active public believes that they live in an exceptional democracy. This conviction is held despite the abysmal candidate choices they are given and the obscene mountains of money backing them. Surely, the ruling elites would not want to disabuse a quiescent citizenry of this delusion by allowing the naked coercive state to be exposed. 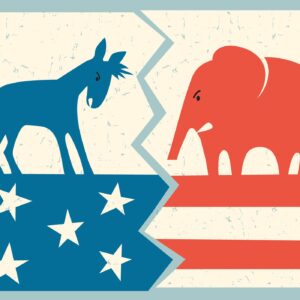 Symmetry of the Two-Party Duopoly

So, we have a marvelous symmetry of contention. Republicans accuse Democrats of collusion with Antifa to establish a socialist tyranny. Democrats accuse Republicans of marching to a fascist dictatorship with the Proud Boys.

On the right, former Reagan sub-cabinet official Paul Craig Roberts has gone off the rails in an anti-Semitic and white supremist article: “Democrats Have Planned a Coup If Trump Wins Reelection.” John Daniel Davidson, political editor at The Federalist, sees: “Under the guise of planning for right-wing violence if Trump loses, Democrats are gaming out how to steal the election if Trump wins.”

On the left, the person that the inimitable Caitlin Johnstone calls “the closest liberals can get to speaking to the left’s manager,” Noam Chomsky, claims Trump is “worse than Hitler.”

The most compelling reason emerging to vote for Biden is that, if he loses, we will have to endure four more years of the increasingly unhinged rants by Democrats about Trump.

Partisans on either side of the narrow Washington consensus admonish that the other will mount a coup. This is a distraction. As long as the covert dictatorship of capital is accepted so readily, the ruling elites have no incentive to opt for an overt dictatorship.

Recall the angst of the Trump impeachment. Nothing came of it and not a word was uttered about it at the Democratic National Convention that followed. Impeachment was also a distraction. Hidden behind the spectacle of petty partisan rancor was underlying class unity on matters of import.

At about the same time the Democrats accused Trump of being the greatest threat imaginable to humanity, the same Democrats by super-majorities renewed the Patriot Act giving this president wartime powers in a time of peace, gifted the commander and chief with a record military budget, and passed the historic massive upward redistribution of wealth known as the CARES Act.

The presidential race, by mutual consent of the major contestants, is reduced to a single issue – Trump – at a time of unprecedented crises that call for solutions. Matt Taibbi comments in reference to the obsession with Trump: “Though most of our problems are systemic, most of our public debates are referendums on personality.”

Both parties of capital are united in opposing popular demands. Polls show 60% or greater approval ratings for these important issues (modified from Greg Godels) that the duopoly conspires to squelch by making this an election over a single personality:

The failure of either of the major parties to embrace issues of import to humanity let alone to working people is the problem. These are issues the majority of voters support. 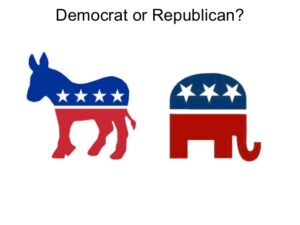 The Race Card: Choice between the Good Cop and the Bad Cop

CounterPunch editor Jeffrey St. Clair observes: “The genius of the Biden campaign is that there really is no Biden campaign.” With manifest unity on the major issues, the two parties of capital try to distinguish each other over their posture on race. But what the two parties really offer is the choice between the good cop and the bad cop.

Republicans are the designated party of white supremacy. Democrats, who for decades tolerated their racist Dixiecrat wing in the South – evidenced by Biden’s long partnership with segregationists – are the party of cosmetic identity politics, which is the lipstick on the pig of institutional racism. Senator Cory Booker, himself an establishment Democrat, correctly accused Biden of being the architect of the mass incarceration system disproportionately impacting people of color.

Trump’s reprehensible, racist dog whistles need to be put into perspective with Obama’s immigrant deportations, Clinton’s crime and welfare bills, and even Roosevelt’s internment of the West Coast Japanese in terms of impact on people of color and the poor.

Biden, not Trump, said, “We have predators on our streets…We have no choice but to take them out of society.” That was back in 1993 in support of what has become the carceral state, for which today he proudly takes credit: “I’ve demonstrated I care about my whole career … dealing with a criminal justice system to make it fair and make it more decent.”

White supremacy is unmistakably the seminal problematic of the American project. The Republican’s not so subtle white supremacy and the Democrat’s identity politics both serve to split and weaken the working class along racial lines; two sides of the same coin. The race card is used by the duopoly, not to achieve social justice as it should be, but to intensify discord and division.

Political economist Rob Urie notes: “When the Democratic-leaning press began (falsely) reporting on rising hate and racial backlash, and the CEOs of large banks and tech companies began stating publicly that white supremacy is the only problem in need of solving, the havoc that neoliberal policies have wrought quickly disappeared as a topic of polite conversation.”

Death of Liberalism and the More Effective Evil

Trump is a symptom, not the disease, which is neoliberalism. Richard Nixon was the last liberal president. Jimmy Carter heralded the neoliberal order, which has three main components: austerity for working people coupled with welfare for financial capital; imperialism and endless wars abroad; and massive growth of the security and surveillance state. These components arc in a downward trajectory that converges with fascism.

With the death of liberalism as a viable political force, its inheritors are relegated to the role of legitimizing the right and attacking the left. The Democrats have emerged as the more effective evil by either coopting or, if that fails, crushing progressive alternatives.

The Democrats, not the Republicans, defeated the Bernie Sanders insurgency. Arguably, the ruling circles in the Democratic Party prefer to run such patently unattractive candidates as Clinton and Biden, risking a Republican victory, rather than run a putative progressive such as Sanders who espoused genuinely majoritarian issues.

Despite their hostility to the left, the Republicans were not the ones who have gone after the Green Party. The Democrats, as gatekeepers for the establishment, have attacked progressives such as Green Party presidential candidate Howie Hawkins. The left – especially those who use their leftist credentials to legitimize voting for Democrats – is advised to understand who their friends are and who attacks them.

The Ruling Elites Win Regardless of the Election Outcome

Portraying the two-party duopoly through the lens of its extremist wings is misleading. This error more generally leads people to see the two major parties as more significantly different than they are, when in fact there is little daylight between, say, Romney and Biden. This is critical because Biden/Pelosi/Schumer rule the Democrats not Sanders/AOC. And the Biden buddies have birds of the feather on both sides of the aisle.

Biden is the preferred choice of most ruling elites with that ticket outspending Trump 2:1 and growing. The ruling elites know they win with either ticket but are putting the big money behind the Democrats, because the Democrats are perceived as better representing elite interests this time around. Biden will follow the money to the White House.

Trump may be defeated in the election. But the battle to win over the dispossessed, who are the victims of neoliberalism, must be the overriding objective of any left alternative. As the late economist Doug Dowd lamented, the left in the US was once composed principally of self-identified workers but has now largely lost that constituency.

Roger Harris is a member of the TRANSCEND Network, associate editor at Council on Hemispheric Affairs (COHA), and the immediate past president of the Task Force on the Americas, a 33-year-old human rights organization in solidarity with the social justice movements of Latin America and the Caribbean. He is active with the Campaign to End US-Canadian Sanctions against Venezuela and is on the state central committee of the Peace and Freedom Party, the only ballot-qualified socialist party in California. He recently visited Syria for an international conference on the impacts of economic sanctions by the US and its allies on over 30 countries in the world. roger.harris@comcast.net

Anticopyright: Editorials and articles originated on TMS may be freely reprinted, disseminated, translated and used as background material, provided an acknowledgement and link to the source, TMS: US Presidential Campaign Spectacle: Distracts from Essential Issues while Playing the Race Card, is included. Thank you.