9 Nov 2020 – Twelve months after being driven into exile by right-wing forces, socialist former president Evo Morales was “received by the very social movements who defeated the coup and restored democracy.” 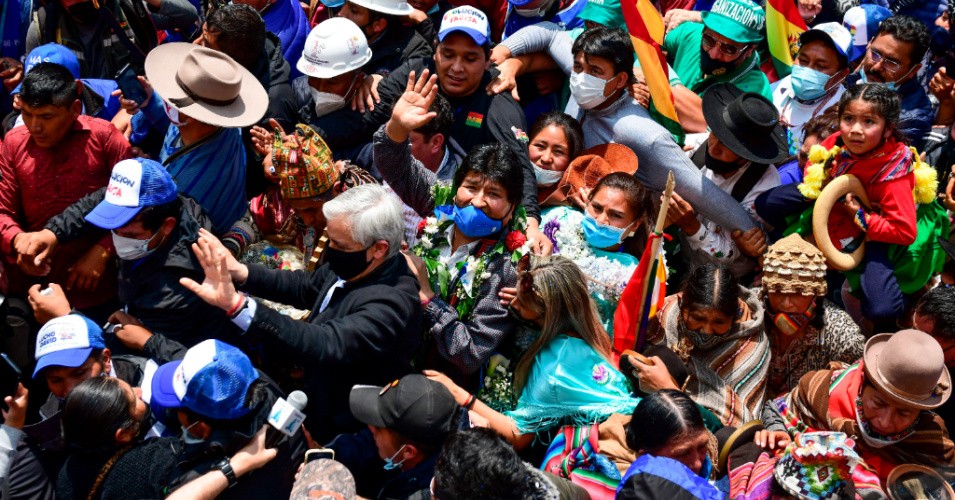 Bolivia’s former president Evo Morales waves in Villazón, Bolivia on November 9, 2020 upon returning to his country from exile in Argentina, where he had sought refuge after a right-wing coup one year ago. (Photo: Ronaldo Schemidt/AFP via Getty Images)

Evo Morales was welcomed back to Bolivia today surrounded by the thunderous cheers of thousands of supporters who took part in a joyous celebration filled with music.

Morales’ return comes one year after the former president of the Latin American country was forced into exile by a violent far-right regime that was installed via a military coup, which was facilitated by unsubstantiated claims of electoral fraud made by the U.S.-dominated Organization of American States (OAS) and condoned by corporate media outlets.

It also comes one day after Bolivian President Luis Arce, Morales’ ally in the Movement for Socialism (MAS) party, was inaugurated following his election last month, considered a repudiation of authoritarianism and imperialism.

Massive crowds gathered in Villazón, a southern town that borders La Quiaca, Argentina, to greet Morales upon his return to Bolivia from the neighboring country, where the popular leftist leader had spent most of the past twelve months as a political refugee.

“Today is an important day in my life. Returning to my homeland, which I love so much, fills me with joy,” Morales tweeted early Monday morning, prior to crossing the border with Argentinian President Alberto Fernández.

Morales was not the only person who was ecstatic about his homecoming. Journalist Ollie Vargas shared a video on social media of Bolivians dancing in Villazón on Sunday night in anticipation of Morales’ return.

In Villazón, Bolivia, people are bursting with excitment for the return of Evo Morales tomorrow. He'll be crossing the border on foot into this town on the Bolivian side.

"We're back in power, now theres millions more of us, even more than the first time" pic.twitter.com/sMuVeAb4GS

On Monday morning, thousands of Bolivians gathered to welcome Morales back to the country.

Moments before Morales’ return, Camila Escalante, a reporter with teleSUR English, called it a “historic day for the people of Bolivia and our continent.” Morales, she noted, will “be received by the very social movements who defeated the coup and restored democracy.”

Historic day for the People of Bolivia and our continent as Evo Morales returns to Bolivia one year after the coup.

He’ll be received by the very social movements who defeated the coup and restored democracy. @teleSURenglish pic.twitter.com/I0tw16OZD9

Kawsachun News captured the scene as Morales crossed the border.

BREAKING: Evo Morales has crossed over the Quiaca-Villazón international border, marking his return and the social movements' victory over the 12 month coup. pic.twitter.com/leIi8pPHrW

“I am very grateful to the Bolivian people for receiving me with such affection,” Morales tweeted soon after his return.

According to teleSUR English, Morales, accompanied by Fernández, will embark on a tour of Bolivia this week and is scheduled to arrive in the city of Cochabamba on Wednesday [11 Nov].