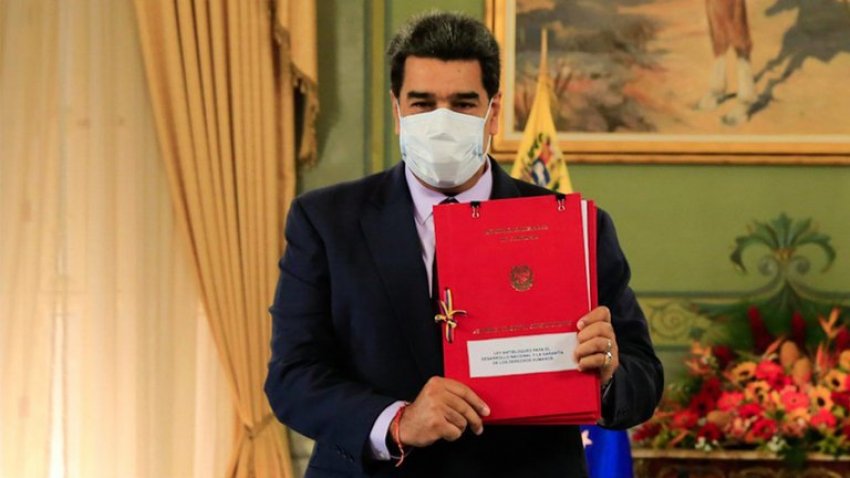 Venezuelan President Nicolas Maduro holds up a copy of his anti-blockade law.

30 Oct 2020 – Elected in July 2017, the ANC was an initiative taken by President Nicolas Maduro to counter months of violent right-wing opposition protests. Its official mandate is to promote a national dialogue on reforms to the constitution as a way out of the country’s deep economic and political crisis.

But three years on — and with few, if any, initiatives emanating from the ANC — the economic crisis has only deepened.

This has been largely due to the United States ramping up sanctions on Venezuela since 2017. These sanctions have worked to cripple Venezuela’s oil industry, blocked its access to international financial markets and scared off potential investors under threat of financial punishment. It is estimated that the economic sanctions have cost Venezuela’s economy upwards of US$116 billion, and contributed to the deaths of more than 40,000 Venezuelans.

Faced with this dire situation, Maduro proposed the new anti-blockade law, arguing it is essential to helping circumvent the sanctions. But some sectors believe it represents an important departure from the socialist policies of his predecessor, Hugo Chávez.

Under Chávez, the Venezuelan state nationalised key natural resources and industries for the purposes of redistributing wealth towards fighting poverty and rapidly expanding access to education, healthcare and basic services.

Based on the premise that the only way to get rid of poverty was to give power to the poor, the government targeted funds at initiatives that encouraged the self-organisation of the people. This included experiments in community-run social missions focused on education and health, attempts at democratising workplaces through cooperatives and worker-run enterprises, and initiatives in local grassroots democracy such as community councils and communes. These elements of peoples’ power became the backbone of Chávez’s Bolivarian Revolution.

But due to the brutal sanctions regime and hyperinflation, which has pulverised workers’ wages, Venezuelans have seen many of these social and democratic gains reversed. Survival, not self-organisation, has become the main focus of daily life for many.

Speaking to Green Left, revolutionary activist and sociologist Reinaldo Iturriza said the anti-blockade law should be viewed as part of a broader shift in the government’s economic orientation, which dates back to the Bolivarian Economic Agenda launched in 2016.

Back then, amid a severe drop in oil revenue and defeat in the December 2015 parliamentary elections, the government found itself at a crossroads. Through the Bolivarian Economic Agenda initiative, Iturriza explained, the government opted for the path of building “alliances with certain sectors of the capitalist class”.

“This was, without doubt, a point of inflection in the Bolivarian process; not necessarily because the government decided to ‘negotiate’ with a section of the capitalist class,” something it had done previously, including under Chávez. Instead, the key difference was it was now negotiating from “a position of weakness.”

A former minister in Maduro’s government, Iturriza acknowledges that in the situation faced by the government, retreating in order to “reorganise your forces” made sense. “However, what has happened since then has resembled more a disorderly retreat than anything else.”

With popular mobilisation at an ebb, moderate forces within Chavismo “felt their time had come”. Increasingly, certain party leaders and state officials began to publicly speak out against further expropriations and in support of re-privatising certain activities in the oil sector, views that “until then had been inconceivable” within the revolution.

In the absence of any national debate promoted by the government over the need to re-orientate government policy, these voices at the time appeared to be “isolated opinions”. But, with hindsight it is clear they represented a “sign of the new times”, said Iturriza.

“Mismanagement of certain public companies and corruption, along with deliberate disinvestment and a profound lack of confidence in the organised people … contributed to positioning the idea that it was indispensable to establish ‘strategic alliances’ with sections of the capitalist class in order to get out of the quagmire.”

Doing so, it was argued, required opening up new areas for investment, including through the reversal of nationalisations that had occurred during the Bolivarian Revolution.

“The problem, I insist, was not the ‘strategic alliances’ that, in certain cases, were undoubtedly necessary or convenient. This is not a question of principles,” said Iturriza.

“The real problem was that in many cases, the choice was made to disinvest: to abandon public companies with the aim of privatising them.

“In any case, the key here is that the decision could have been made to correct errors in management and guarantee public ownership.”

The Bolívar and Zamora Revolutionary Current (CRBZ) is a left-wing grassroots current inside the governing United Socialist Party of Venezuela.

While acknowledging that “constructive criticisms” have been made of the law, CRBZ activist Jonatan Vargas told GL that, when judging its content, we have to “take into account the reality of what Venezuela is living through”.

For Vargas, the new law is a “political weapon” that could help “stabilise the economy and promote foreign investment, all of which is needed to produce and develop the country”.

Moreover, he adds, the law “strengthens the state” by “unifying all existing public powers behind the central objective of defending the economy”, as it attempts to maneuver around the criminal sanctions.

“What we need to do now is continue the debate around the anti-blockade law among all Venezuelans, so that everyone can comprehend its objectives, functions, capacities, reach, limitations and the controls it is subject to.

“Now, the fundamental subject of the revolution, the people, must guarantee its application through revolutionary vigilance, to push forward and avoid distortions.”

The Unitary League of Chavista Socialists (LUCHAS), which is also active within the PSUV, has taken a very different view.

LUCHAS spokesperson Stalin Perez Borges told GL that, while understanding the need for “an anti-blockade law, an emergency economic law”, the reality is that “this is not what they have presented to us.”

“Rather than confiscating the property of those who have sabotaged the economy, the law will grant them greater powers for investment. Moreover, it could lead to the violation of important laws, and even the constitution, all of which were approved under Chávez and were the result of big, societal-wide debates.”

Similar concerns have been raised by, among many others, high-profile left intellectuals such as Luis Britto Garcia and Pascualina Curcio, constituent assembly members María Alejandra Díaz and Telémaco Figueroa, pro-revolution parties such as the Communist Party of Venezuela and Homeland for All, and popular movements including those involved in For All Our Struggles.

Among the articles of concern are those that remove democratic controls or protections by, among other things: allowing for the creation of a separate budget for the purpose of promoting the Bolivarian Economic Agenda, but that lacks any legislative oversight (Article 18); the removal of the National Assembly’s competency to ratify international agreements and contracts (Article 10); and infringements on the right to free speech of those who make information public regarding certain contracts, potentially, even if this is done to expose acts of corruption (Article 37).

Critics have also warned of the pro-privatisation logic of articles that allow the executive to modify “the constitution, management, administration, functioning and participation of the state in certain public or mixed companies” (Article 26), as well as “stimulate or benefit the partial or complete participation, management and operation of the national and international private sector in the development of the national economy” (Article 29).

Britto Garcia writes that “rather than expanding state ownership or social administration, as a socialist government should do, the law tends toward broadening and strengthening private property, above all that owned by international interests.”

Perez Borges said: “It’s clear that the intent is to privilege private investment. The government is under the illusion that this law will help the country get around the blockade and get out of the crisis.

“But this is highly unlikely, given the current state of affairs in Venezuela and the global economic situation. Even if this was a possibility, nothing can be done at the expense of our sovereignty and our constitution.”

Summing up the project, Perez Borges said: “This law is very concerning, because it represents a profound shift away from the political project of 21st century socialism.

“The government should present its proposal again, but this time to the country, so that everyone can debate it instead of trying to hide its new pro-imperialist and anti-democratic orientation.”

Yet, rather than promote discussion, some figures within the PSUV simply denounced critics as “aiding the right”. Controversially, the bill was approved by the ANC without any formal discussion, and with some delegates stating they were denied access to the assembly after voicing criticisms.

Others within the governing party, however, believe a debate on the government’s economic orientation is critical to the future of the revolution.

Responding to the debate, former vice-president and PSUV leader Elias Jaua wrote: “It has been a long time since I have seen such important factors within Chavismo challenge and demand explanations with such courage and passion, in support of the principles that sustain the Bolivarian and Chavista project…”

“This debate, forced upon us by public opinion, has allowed us to see that broad sections of Chavismo are willing to defend the foundational values of the Bolivarian Revolution.”

While stopping short of casting judgement on the new law, Jaua wrote: “We will have to wait and see what the [government’s] concrete plans are in order to evaluate if this [new law] signifies, as it appears it might, a shift away from one of the fundamentals of Chavismo: the safeguarding national property in the hands of the state.”

In the meantime, we need “to open up authentic spaces for internal debate, where any changes being made to the model constructed by Chavez as a result of the current circumstances, are properly outlined…”

“In politics, tactical manoeuvres have to be explained in a transparent manner; it is necessary to convince others,” because frank discussion is crucial to revolutionary unity, Jaua wrote.

“Humility, correct methods of leadership, and the willingness to convince rather than impose are key to maintaining unity and lifting the spirits of a force confronting the gravest foreign aggression of modern times.”

“Beyond the anti-blockade law”, said Iturriza, “I believe there are few more important things that could be done than to carry out a critical balance sheet of the Bolivarian Economic Agenda”.

A good starting point, argues Iturriza, would be for the revolution’s leadership “to understand that the opacity that has characterised the government’s actions in the area of economic policies has been a crass error”.

“Given the results, there is more than enough evidence that, in attempting to find a way out of this mess, we have ended up deeper within the labyrinth,” he said.

“If what occurred was a disorderly retreat, then what we need to do is reorganise our forces so that at some point we can be in a position to go on the offensive.

“It would be good if we acknowledged that we chose one among many possible paths, and that, given the results have not been favourable to the popular majorities, we can and should choose a new one. Within the revolution, always.”