Where domestic issues are concerned, President-elect Joe Biden clearly feels the need to recognize and conciliate the Democratic Party’s quarreling interest groups — centrists and progressives, Wall Streeters and labor unionists, identity group militants and straight white liberals.  A utopian project?  Perhaps, but Donald Trump’s strong showing in the presidential election and his possible presence as Chief Oppositionist over the next four years make some sort of intergroup reconciliation mandatory for the Dems.

Foreign policy, however, is quite another matter.  Here, Mr. Biden has moved swiftly to fill out his foreign affairs roster by appointing leading members of the national security establishment to influential positions: high perches from which they will no doubt attempt to make America globally great again.

No primitive “America First” bombast for these deep-staters! The language of figures like Anthony Blinken (Secretary of State), Jake Sulllvan (National Security Advisor), Avril Haines (Director of National Intelligence), Linda Thomas-Greenfield (Ambassador to UN), et al. is the discourse of federal/corporate bureaucrats who have learned never to speak of power, only “responsibility”; never to assert U. S. supremacy, only “leadership”; never to be rude to foreign leaders, only to threaten them privately; never to offend the military brass and military-industrial tycoons, only to solicit them discreetly for future jobs and emoluments.

These diplomatic tonalities cut little ice with realists like Andrew Bacevich, president of the Quincy Institute, whose recent interview on the BBC concludes, “This team has a belief in American supremacy which could lead them to recklessness in their use of American military power.”

While agreeing with Prof. Bacevich, I want to push the critique a bit further. The problem with putting national security intellectuals like these in power is not that they are raging imperialists inclined to threaten alleged adversaries and disobedient allies with death and destruction for failing to obey American orders.  It is, rather, that they are imperialists in denial – policymakers who do not recognize themselves as the creatures of a structured system, but rather think of themselves as free actors responding to individualized threats and opportunities.  If a system producing mass violence does not exist, then the way to prevent mass violence is to be a “responsible leader,” which is to say, a good emperor.  This is where the Cyrus Fallacy comes in.

Once upon a time – actually, in the sixth century B.C.E. – there was a king of Persia called Cyrus, known as the Great for his conquest of most of the world between the Hindu Kush Mountains and Macedonia.  Cyrus is the foreign ruler mentioned most frequently and admiringly in the Hebrew Bible, the Tanach.  To hold together the largest and most diverse of the ancient empires, he granted conquered nations considerable autonomy, respected local religions and customs, and – here is where the Bible gives him rave reviews – permitted national communities abducted and made captive by previous emperors to return to their ancestral homes.  Cyrus allowed the Jews, driven into exile by their neo-Babylonian conquerors, to return to Palestine. 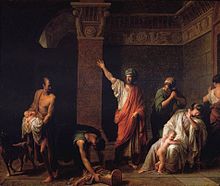 These deeds earned the “good emperor” such renown that the prophet Isaiah of Jerusalem declared him to be no less than the Anointed One: The Messiah.  At the same time, Cyrus made war non-stop against imperial competitors and used a rich assortment of violent tools, including massacres, enslavement, and an eclectic range of tortures, to punish rebels against his rule.[i]  Worse yet, since his reign did not end the system generating war and repression, his relative forbearance proved short-lived, and his successors, Cambyses, Darius, Xerxes, and Artaxerxes, ruled bloodily until they were themselves conquered by Alexander of Macedon (another great killer dubbed the Great).

In the case of the incoming Biden administration, the great danger is that figures like Blinken and Sullivan will attempt to correct President Trump’s deviations from the norm of “responsible internationalism” without recognizing that Trump also deviated, albeit partially and inconsistently, from the norm of imperialist expansion.  Ever since Harry Truman’s presidency, mainstream Democrats have offered up a combination of relatively progressive social policies at home and aggressive, world-dominating schemes abroad – a contradiction that assumed its most glaring form under President Lyndon Johnson, who authored both the War on Poverty and the Vietnam War.  (Joe Biden himself voted to approve the invasion of Iraq in 2003 and, as Obama’s vice-president, helped conduct the disastrous invasion of Libya in 2016.)

An essential feature of this two-headed policy is to blur the distinction between cooperative international activities such as participation in climate change treaties and empire-building activities like the maintenance of military bases in more than 80 nations and the promotion of NATO expansion. This blurriness becomes blinding where an alleged adversary like China is involved.  If one wonders what legitimate interests or needs should motivate U.S. policies in the Asia-Pacific region, for example, the conventional answer asserts a need to cooperate with nations other than China to maintain an Asian “balance of power.” This response precisely recapitulates the British Empire’s response to the rise of German power in 19thcentury Europe.  It means continuing to play the Great Game of imperialist politics, which in the twentieth century gave us two world wars that killed approximately 100 million people and maimed twice as many.

King Cyrus notwithstanding, there are no good emperors.  It is not just bad people but bad systems that kill and destroy, and imperialism is a system that generates mass violence as part of its normal operations.[ii]  Furthermore, the attempt to maintain a global empire amid signs of its decline exacerbates domestic as well as international conflicts. Internal social struggles in the United States involving bitterly opposed identity groups, fanned by an unstable, authoritarian leader, and taking place during a period of environmental and economic crises, remind one strongly of the conditions accompanying the last years of other overstretched empires, beginning with Rome.[iii]

In order to mitigate the conflicts now rending their country, the Bidenites will have to consider reductions in military and national security expenditures radical enough to support a phalanx of new social programs.  But they are unlikely to do this unless they first recognize that the system which created and sustains the military-industrial complex is an empire that must be dismantled.  The question confronting the new administration can therefore be reframed.  It is how to dismantle the American empire without returning the U.S. to an isolationist “Fortress America” stance that dooms international cooperation and invites expansion by other would-be empires.

A serious discussion of how to redefine America’s role in the world is long overdue.  This redefinition will surely involve very deep cuts in U.S. military expenditures and arms sales, the closure of foreign bases, and the renegotiation of multinational agreements on topics like climate change.  But it will also require radical reform of the United Nations, the strengthening of international courts, and a “cultural revolution” that prepares Americans to play the role of one respected nation among many, rather than that of a global hegemon.

Will the Biden appointees listen to anti-imperialist voices in both the Democratic and Republican parties, as well as among activists outside the two-party system?  Will they recognize and avoid the King Cyrus fallacy?  I have little confidence that hardened “national security” officials will do the right thing, but with Mr. Trump gone, hope still flowers.  One therefore offers a prayer of sorts: ut imperii cadunt.  May the U.S. Empire be dismantled as speedily and peacefully as possible!

[ii] I argue this at some length in Resolving Structural Conflicts: How Violent Systems Can Be Transformed (Routledge, 2010).

[iii] For a remarkably prescient recent analysis, see Kyle Harper, The Fate of Rome: Climate, Disease, and the End of an Empire (Princeton University Press, 2019).

Richard E. Rubenstein is a member of the TRANSCEND Network for Peace Development Environment and a professor of conflict resolution and public affairs at George Mason University’s Jimmy and Rosalyn Carter Center for Peace and Conflict Resolution. A graduate of Harvard College, Oxford University (Rhodes Scholar), and Harvard Law School, Rubenstein is the author of nine books on analyzing and resolving violent social conflicts. His most recent book is Resolving Structural Conflicts: How Violent Systems Can Be Transformed (Routledge, 2017).  His book in progress, to be published in fall 2020, is Post-Corona Conflicts: New Sources of Struggle and Opportunities for Peace.

Anticopyright: Editorials and articles originated on TMS may be freely reprinted, disseminated, translated and used as background material, provided an acknowledgement and link to the source, TMS: Message to Joe Biden and His Foreign Policy Team: Beware the King Cyrus Fallacy!, is included. Thank you.

4 Responses to “Message to Joe Biden and His Foreign Policy Team: Beware the King Cyrus Fallacy!”