The Invincible Green Stick of Happiness 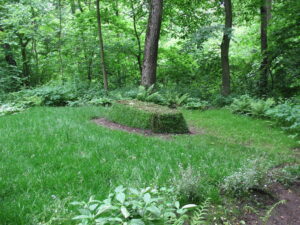 Tolstoy’s grave on the edge of the ravine at his estate Yasnaya Polyana
“Ясная поляна, могила Л.Н. Толстого 2” by Alexxx1979 is licensed under CC BY-SA 2.0

6 Feb 2021 – After a night of haunting dreams that flowed as if they were written like running water, written on air, as the Roman poet Catullus once said, in the depth of a dark winter morning, I decided that I would take a walk in the afternoon, hoping that the sun would then appear, and it did, so I went walking toward the woods through deep white new-fallen snow all around me and entered a path into the woods across from my house that led toward a deep ravine below which were deep dark caves that once sheltered runaway slaves searching for the happiness of freedom, and I thought of them as I poked under the snow on the odd chance that I might find the green stick of happiness that Leo Tolstoy’s beloved brother, ten-year-old Nikolai, had once told the five-year-old Leo was buried by a ravine on the edge of the forest, a stick upon which were written the secret words that would bring love, peace, and happiness to everyone, and would do away with death, for their mother had died three years earlier and their father would die four years later, but I saw nothing and continued deeper into the forest to try to shed a sad feeling from a lock-down that had brought my spirits low as I tried to understand why so many people I knew were so enslaved, their minds forged in manacles, and how sad and dispirited it made me knowing that they were locked away from me in some conventional reality sold to them by liars, but perhaps you like the word depressed and you can use it if you want, but all I know is that the spirit of happiness had escaped me as I trudged deeper into the forest between the high pine trees until the trail I walked was intersected by another and a man met me there, as if he knew I was coming, a man with a long white beard and piercing eyes and we nodded and then he continued beside me and asked me what I was looking for, which startled me, and I was speechless and he said he’s been through here many times, especially by the ravine, and Leo told me he never could find the green stick of happiness his brother once told him was buried there but he was not giving up, he never would do that since he loved his brother who would never lie, he knew the stick existed and that’s why he himself was buried there, and he told me to continue seeking, because the stick was real and yes, those slaves knew it and were in that ravine for a reason, so we walked on as a man approached us who said his name was Albert, and I said Camus, and he said yes, let’s walk together guys, for these woods are dark and deep I know, but look up at the sky, the clouds have parted and the sparkling sky is speaking to us, right Leo, who said yes, I remember when Andrei in my book War and Peace lay wounded on the battlefield and looked at the sky, I wrote that he realized then that that lofty sky was infinite and that happiness was possible, that especially in the midst of battle you have to look up and realize that, that there are deeper reasons for things and petty concerns shield the spirit of truth and that even in the midst of war you can glimpse that reality, and it sounded good, I had heard their spiels before, or had read them to be accurate, they were great writers but this was my life and I couldn’t live in their books, but I wasn’t reading, I was walking, or was I dreaming, and then we came to the end of the path leading out of the woods and the sky opened out from the vast tree cover and they were gone and I was all alone again as usual, dispirited and heading back home on the road by the lake when I looked up at the sparkling blue sky and light that radiated off the snowy frozen lake and rose back to the sky in columns of undulating glory and felt the sun that had warmed the day and heard birds in the trees and was overwhelmed with a rush of happiness I can’t describe but it was not a dream and I walked in joy for a few minutes, knowing I had found the stick and that in the depth of winter, as Albert said, I had finally learned that there was in me an invincible summer, but that it came and went like running water, like flowing air, but it was enough for now. 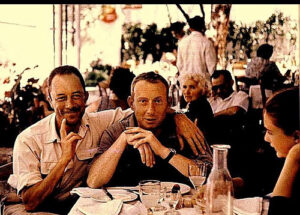 Albert Camus with his best friend Michel Gallimard, both of whom died from a car crash on 4 January 1960. On the right is Jeannine, Michel’s wife, who survived the crash.
“Albert Camus, Michel y Jeannine Gallimard” by Antonio Marín Segovia is licensed under CC BY-NC-ND 2.0

Edward Curtin is a widely published author and a member of the TRANSCEND Network for Peace Development Environment. His new book is Seeking Truth in a Country of Lies – His website: Behind the Curtain – email: edcurtinjr@gmail.com

One Response to “The Invincible Green Stick of Happiness”