“Ending the war as soon as possible is the only rational and humane thing to do,” said a co-director of the Costs of War Project. 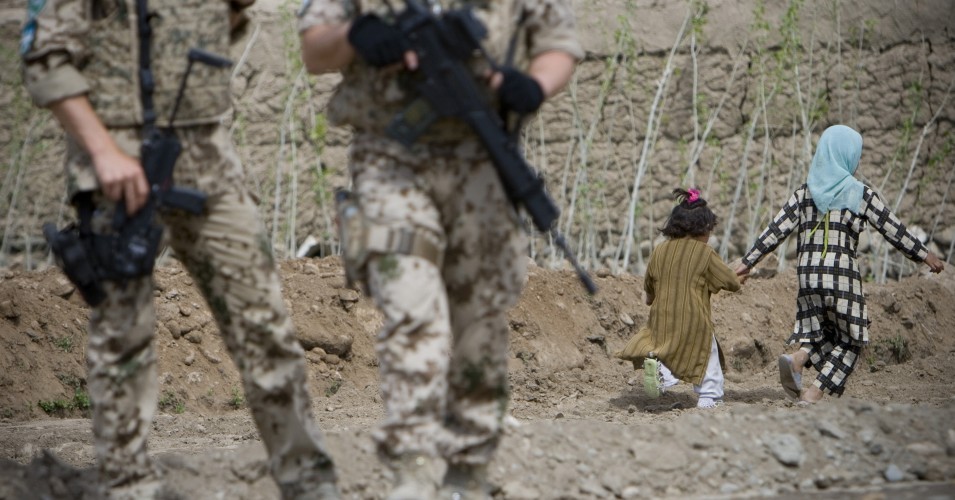 Since the 2001 U.S. invasion of Afghanistan, the war has cost trillions of dollars and nearly a quarter-million lives.
(Photo: Veronique de Viguerie/Edit by Getty Images)

16 Apr 2021 – In the wake of President Joe Biden’s announcement that he plans to withdraw all regular U.S. combat troops from Afghanistan by this year’s anniversary of the September 11, 2001 attacks, experts at the Costs of War Project on Friday released an update on what nearly two decades of war has cost in both dollars and human lives.

An estimated 241,000 people have died as a direct result of the war, and the United States has spent $2.26 trillion on military operations in Afghanistan and Pakistan since the 2001 U.S. invasion, according to the project, housed at Brown University’s Watson Institute for International and Public Affairs and Boston University’s Frederick S. Pardee Center for the Study of the Longer-Range Future.

“These horrific numbers are testament to the costs of war, first to the Afghan people, and then to the soldiers and people of the United States,” said project co-director and Brown University professor Catherine Lutz in a statement. “Ending the war as soon as possible is the only rational and humane thing to do.”

241,000 are those who have died directly. Many times more have died due to disease, loss of access to food, water, infrastructure, and/or other indirect consequences of the war. https://t.co/DXCau6FcpA pic.twitter.com/C8g2Zdgph6

The new Costs of War Project figures are part of a nearly decadelong effort by co-director and Boston University professor Neta Crawford to track the costs of post-9/11 wars in not only Afghanistan and Pakistan but also Iraq, Somalia, Syria, Yemen, Somalia, and beyond.

The death tally includes U.S. military and contractors, Department of Defense civilians, Afghan and Pakistani national military and police, other allied troops, civilians, opposition fighters, journalists and media workers, and humanitarian aid workers. The project notes that “these figures do not include deaths caused by disease, loss of access to food, water, infrastructure, and/or other indirect consequences of the war.”

The financial costs include Overseas Contingency Operations budgets of the U.S. Defense and State departments, the DOD’s base-budget war-related increases, veteran care, and estimated interest on money borrowed to fund the war. It does not included future costs of veteran care or future interest payments.

“The DOD spending, at over $900 billion in Afghanistan, is the tip of the iceberg,” Crawford said. “The costs of the Afghanistan war include its escalation into Pakistan, millions of refugees and displaced persons, the toll in lives of combatants and noncombatants, and the need to care for America’s veterans. The Pentagon’s base budget has increased as well.”

“A more comprehensive accounting is yet to be completed. It would include not just money that may or may not have been well spent, but the count of those wounded, those who lost limbs, and the tremendous psychological toll of decades of war on combatants and noncombatants and their families.”
—Neta Crawford, The Costs of War Project

“We report these estimates so that the American people will have a better understanding of the scale of the effort and its consequences,” she explained. “The American people also lost some transparency here. A more comprehensive accounting is yet to be completed. It would include not just money that may or may not have been well spent, but the count of those wounded, those who lost limbs, and the tremendous psychological toll of decades of war on combatants and noncombatants and their families.”

The new numbers come after Sen. Bernie Sanders (I-Vt.) and Rep. Ro Khanna (D-Calif.) argued Thursday in an op-ed for the Washington Post that the withdrawal should spark reflection upon “the enormous costs” of nearly two decades of war and enable the U.S. to “refocus on diplomacy as our foreign policy tool of first resort.”

“Executing a responsible and comprehensive withdrawal from Afghanistan is an essential first step toward Biden fulfilling his commitment to end ‘forever wars,'” the lawmakers wrote. “But more work must be done.”

“The U.S. government should commit to providing vital funding and diplomatic support to preserve and expand on those gains and press for an end to abuses against civilians,” Gossman said.

In addition to boosting assistance for education and health, especially for Afghan females of all ages, “assistance will be needed to improve enforcement of laws protecting women and to ensure that legal aid is available for women prisoners and juvenile detainees,” Human Rights Watch explained.

The group also called for strengthening Afghan human rights groups, particularly the Afghanistan Independent Human Rights Commission, and said that “the U.S. should provide long-term institutional support to assist independent news media organizations to become self-sustaining. The U.S. should also press the Taliban—which could become an aid recipient under any future peace agreement—to cease all threats and attacks on the media and to pledge to uphold media freedom.”

“After so many decades of war and intense suffering, much of it perpetrated by the United States and its allies, the Afghan people desperately need—and deserve—an end to this war.”
—Medea Benjamin and Nicolas J.S. Davies, CodePink

Medea Benjamin and Nicolas J.S. Davies of the peace group CodePink wrote in The Progressive Thursday that “it’s true that a U.S. withdrawal may lead to setbacks in the gains made by Afghan women and girls. But those gains have been mainly in the capital city of Kabul. Two-thirds of girls in Afghanistan still receive no primary education, and Afghan women will never achieve significant advances while their country remains at war.”

“Ending the fighting and investing a small fraction of U.S. war spending in education and healthcare would do far more to improve the lives of Afghan women and girls,” they asserted. More broadly, the pair filled in some of details that haven’t been a major focus since the president confirmed plans to end the longest U.S. war, writing:

What Biden did not admit is that the United States and its allies, with all their money and firepower, were unable to vanquish the Taliban, who currently control about half of Afghanistan and are positioned to control even more in the coming months without a ceasefire. Nor did Biden admit that, in two decades, the United States and its allies have been unable to build up a stable, democratic, popular government or a competent military in the country.

Benjamin and Davies also noted that “while Biden is being pilloried by some for pulling out too soon, the truth is that he is violating a May 1 deadline for U.S. troop withdrawal that was painstakingly negotiated under the Trump administration,” and anticipation of that U.S. violation has prompted the Taliban to refuse to join 10 days of United Nations-led peace talks set to start in Istanbul on April 24.

“We must hope that, in the coming months, the U.N. will find a way to bring the warring parties in Afghanistan together and craft a ceasefire and a workable peace process based on power sharing,” they concluded. “After so many decades of war and intense suffering, much of it perpetrated by the United States and its allies, the Afghan people desperately need—and deserve—an end to this war.”