The Vengeance of the Lord of Mother Earth 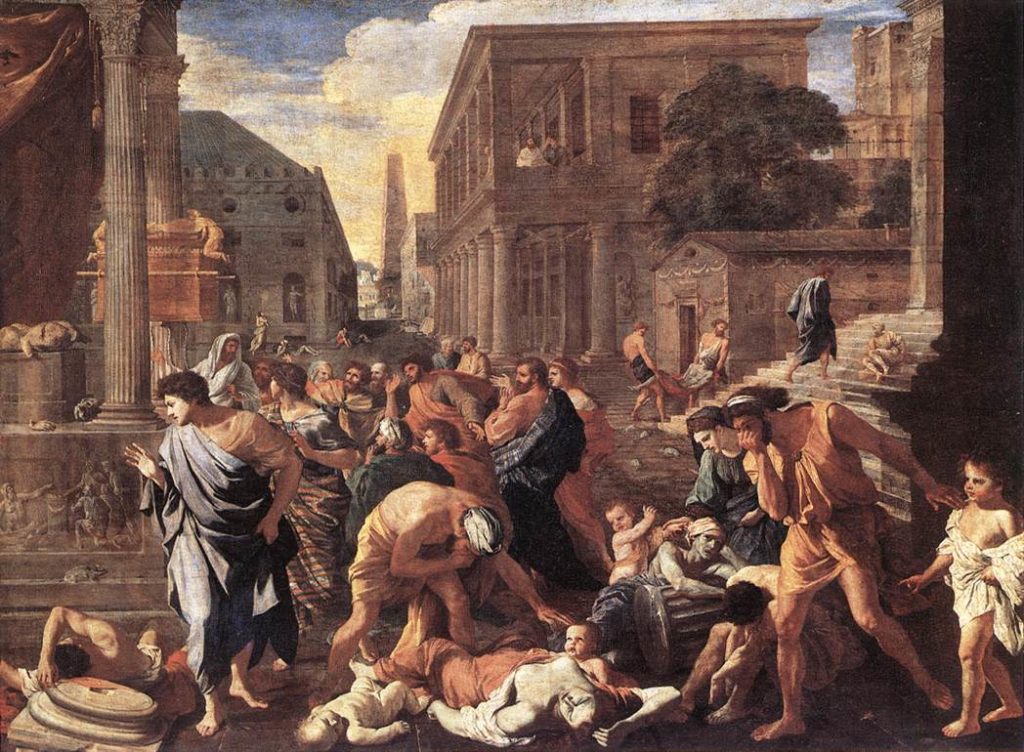 The Plague of Ashdod, by Nicholas Poussin 1630

While there is a record of 1,410,460,682 doses of vaccines doses administered, the global death toll is at 3,349,187.  It is also interesting to note that while science and technology of the 21st Century is feverishly working to attack the invisible bioterrorist, the virus is working equally hard by mutating in different variants to continue its attack on humanoids, with devastating precision and results.  Globally, burial spaces are in short supply and where cremations are mandatory, as prescribed by religious doctrines, wood is scarce for open funeral pyres.  In some regions, gas fired cremation chambers are also in critical demand, while thousands are perishing in the third and even fourth wave of the attack on the human race.  This grim scenario is no different from the sentiments expressed in scriptures of the Abrahamic faiths and in recorded or observed history.  These observations inevitably lead one to question, is there a force that is beyond and greater than the realm of science and technology which is resulting in a self-purge of the human species with a vengeance.  The Lord of the Abrahamic faith is portrayed as a vengeful Lord who seeks retribution upon the transgressing humanoids, as depicted in the respected Old Testament, the Torah, and the Quran. In an era when Prophets and Messengers of the Lord mixed freely with ever erring humanoids, where they were deployed as warners to the non-complaint and transgressing nations, retribution was swift and complete as experienced by the sinful people of Noah, Sodom and Gomorrah, as well as the Aad and Thamud[ii] people from antiquity, as described in the Quran. To ‘Aad was sent the prophet Hud; to Thamud, Saleh, and together with another Prophet Shoaib.  These messengers were divinely appointed to warn the northern Arabian tribes of their misdemeanours against the command of the Lord and constituted the individuals from the respective communities, one of their brethren.

In the present SARS Co-2 pandemic, the situation is no different and is historically reenacting the scenario of the past occurrences of plagues, pandemics and other doomsday warnings of the ancients, as well as voices from antiquities.  Presently, we note that the vaccines are causing serious adverse reaction, albeit in a small percentage, the vaccine hesitancy group is advocating resistance to vaccination, which the Big Pharma is pushing back trying to sell more doses to poor countries. Mass deaths is order of the day in Brazil and India and the clerics are preaching in the places of worship reminding humanoids of their transgressions of vice, and operating at the level of the primitive reptilian brain which is gaining the upper hand, as witnessed by the multizonal global conflict, death and wanton destruction in different parts of the globe.

Let us examine some of the great bio-scourges against and resulting in the decimation of the human race. The discoveries of mummies with smallpox like lesions informs the 21st century that this pandemic was even present during the Pharaonic times.  In addition, Prophet, Moses was commanded by the Lord to go to the Pharoah, “for he has indeed transgressed”  The result of the Pharaoh’s defiance and accepting the that he was not the Lord, resulted in an unleashing of plague and pestilence of an unprecedent nature against the oppressors, the Egyptian people, sparing the children of Israel, who were also unappreciative of the Lord’s favours and were driven to wandering around for forty years in the Sinai Desert, according to the scriptures.  The Islamic Quran declares “And We certainly sent into every nation a messenger, [saying], “Worship Allah and avoid Taghut.” And among them were those whom Allah guided, and among them were those upon whom error was [deservedly] decreed. So proceed through the earth and observe how was the end of the deniers.”[iii] (Quran 16:36)

Another example of the Abrahamic Lord’s retribution is the Plague at Ashdod. as immortalised by the artist Nicolas Poussin[iv] in his great painting of 1630, of which there are three copies presently. The Old Testament[v] narrates an account of an epidemic affecting the Philistines after they had captured the Ark of the Covenant from the Israelites and moved it to their coastal city of Ashdod. According to Samuel 1:5,[vi] the Lord first destroyed the statue of their god Dagon, then unleashed a fierce epidemic characterized by what has variously been translated as tumors, swellings in the private areas. Poussin began to paint The Plague of Ashdod while the bubonic plague was still raging throughout Italy, though sparing Rome. He first called the painting The Miracle in the Temple of Dagon, but later it became known as The Plague at Ashdod[vii]. The original painting is now in the Louvre. It displays the ravages of the plague, rats scurrying on the floor, panic struck people fleeing in all directions, a dead woman lying in the foreground while her husband is pulling the baby away from the mother’s breast to prevent it contracting the disease. It is a moving document of how successive plague epidemics affected the Italian population in the 15th and 16th Centuries. The painting remains one of the most admired creations of the greatest French master of the Baroque.  It is interesting to note that in 16th Century, His Holiness the Pope Clement VI was surrounded by burning fire for two consecutive years, to prevent him from being afflicted by the plague pandemic at the time.  Serendipity prevailed, as the fire kept the rats away, which carried the fleas, harbouring the causative vector of bubonic plague, on their fur coats.[viii] The man who had the misfortune to be the Pope during this arguably deadliest-ever world pandemic was Pierre Roger, who bore the papal name Clement VI.[ix]  He had a reputation for luxurious living, hence the plague as a punishment from the Lord. Some critics say he gave the papacy a bad name.

During the 14th Century repeated waves of the bubonic plague afflicted Europe.[x] This was the doomsday scenario described as an apocalypse, decimated one-quarter to one-third of the population. Presently, science has enabled us to track both the numbers of people impacted and the spread of disease, depending on the transparency and cooperation of countries. Then as today, people feared touching both the living and the dead, and today the chant “ring around the rosie, pocket full of posies, ashes, ashes, we all fall down,” which originated in the years of the plague, is more than just a nursery rhyme, but rather a reminder that history does not repeat but rhymes.[xi] Like COVID-19, the plague was believed to have started in Asia. It traveled not by plane or automobile but by stowing away in the fur of rats in the lower decks and cargo bins of ships making their way along the Silk Road to the Mediterranean.[xii] Thus carried by rats, bubonic plague was transferred to humans through the bite of infected fleas jumping from one host to another. Bubonic plague readily mutated into its far more contagious pneumonic relative, and it was this pneumonic plague that was responsible for the massive deaths that occurred in Europe. Like COVID-19, pneumonic plague was transferred from person-to-person by coughing, sneezing, and aerosolised particles, and likewise was highly contagious.[xiii]

The first plague that befell humanity after the advent of Islam was the Plague of Shirawyah[xiv] (627–628 AD) in Iraq (Ctesiphon) occurring during the life of Prophet Muhammed[xv]. The second was the Plague of Amwas[xvi] (638-639 AD) in Syria, which wreaked havoc during the second Khilafat[xvii]. Umar bin al-Khattab was the Second Khalifa of the Muslims.  The terms ta’un (plague) and waba (epidemic or pestilence) have been well-recognized as diseases since early Islam. The Quran describes them as “Da’bbah (insects) being brought forward, out of the earth.”

According to a narration of Prophet Muhammed[xviii] almost 1400 years ago, “If you hear of a plague in a land, then do not go into it. If it happens in a land where you are, then do not go out of it.”[xix] Hence, social distancing, containment and mitigation was practiced even in early Islamic history, especially considering the fact that microbes were not even heard of at the time.

Konrad Lorenz[xx] has suggested that if a Martian observes the brutal conflicts and wars on earth would never conclude that human behavior is dictated by intelligence or morality. He would find aggressive nations compete when there is no economic necessity, political parties or religions with amazingly similar programs fighting so acrimoniously with deep seated hatred. So called “great men” such as Alexander[xxi] or Napoleon[xxii] sacrifice millions of lives in an attempt to unite the world under their scepter.[xxiii] Humanoids are a threatened species, a creature often operating on instinctive traits such as amassing of property, aggression, and self-assertion, causing global climate change, rampant environmental destruction, mass displacement of humanity but totally unequipped with reliable inhibitions impulses to prevent the self-destruction of the species. Lorenz’s conclusion “that man’s social organization is very similar to that of rats, social and peaceful like humans within their clans, but veritable devils towards all fellow members of the species not belonging to their own community.”[xxiv] Beneath the farcical veneer of our newly acquired reasoning neocortex functions continuously, the wild, hate and crime driven reptilian brain with which we started off millions of years ago and evolved in acquiring a semblance of civilisation.  The above attributes of humanoids, described by Lorenz are most relevant, globally during the SARS Cov-2 pandemic than ever before.

The bottom line is that, we as the ever greedy and often transgressing humanoids are being subjected to the vengeance of the Lord of Mother Earth. It is postulated that if this line of operative philosophy of the ancient reptilian brain[xxv] continues, as opposed to the rational thinking of the larger neocortex found in humans[xxvi], then humanity is doomed to extinction.  This is so eloquently demonstrated in ancient history, with an entirely new city being excavated in Egypt, recently[xxvii], after some 3,500 years, from the sands of time.

Anticopyright: Editorials and articles originated on TMS may be freely reprinted, disseminated, translated and used as background material, provided an acknowledgement and link to the source, TMS: Covid 19 Pandemic: Scriptural and Historical Perspectives, is included. Thank you.